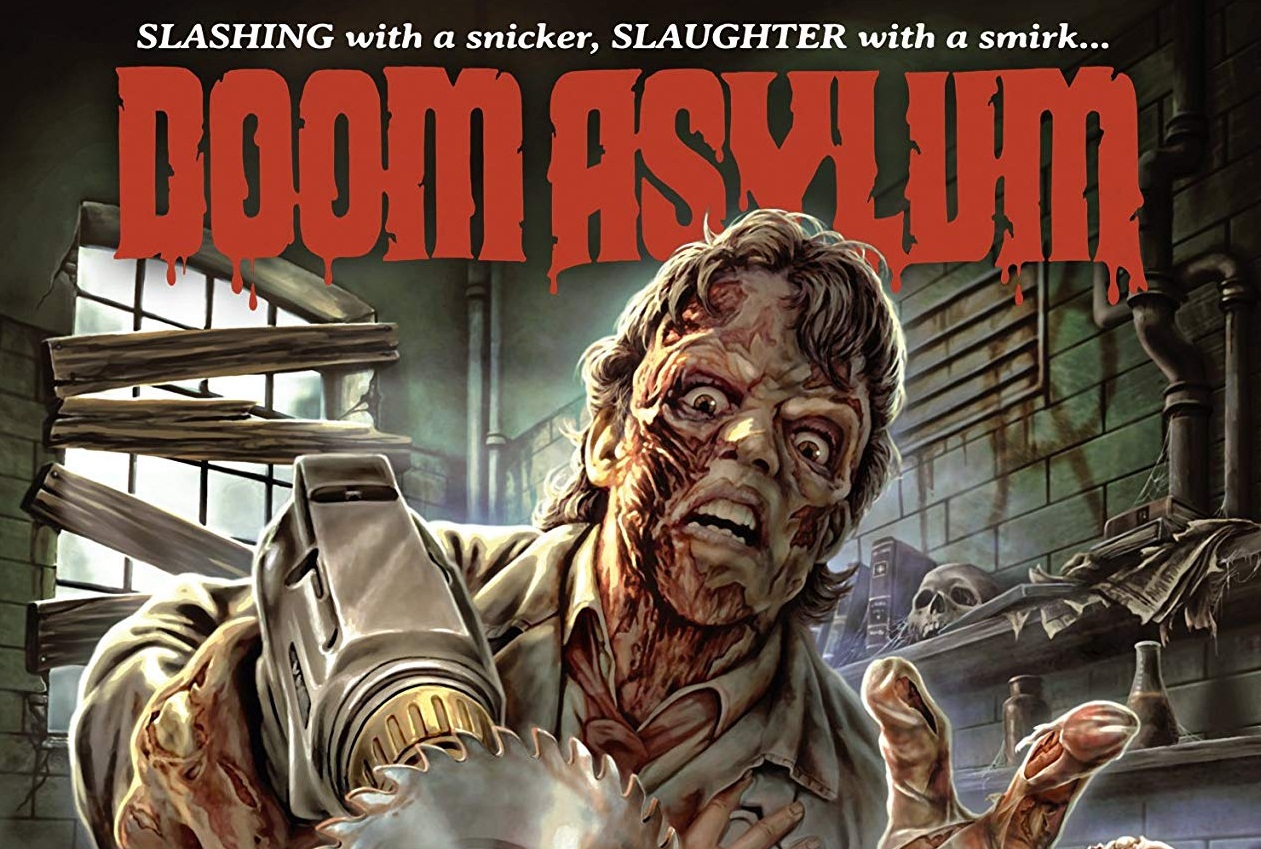 Adam ponders the gore to laughter ratio in Doom Asylum.  The late 80’s Comedy Slasher is being released by Arrow Video on Blu-Ray.

The mileage of entertainment one will get from Doom Asylum will all depend on your tolerance for the kitschy and gore.  Director Richard Friedman uses both (kitsch and gore) in ample enthusiastic amounts.  The story may be as stereotypical as they come but its that gore and kitsch/comedy mashup is as strange a brew as they come.

Ten years after an autopsy gone wrong an abandoned hospital is the home to a shady Lawyer turned Phantom of the Hospital killer.  A group of College Kids and a Goth Girl Punk Band are his newest victims.  Slowly but surely Monster Mitch (Michael Rogen) takes them out in gruesome grisly fashion.  But as we learn, very clunkily, that Mitch is tied to one of these kids.

The film’s biggest issue is the arched acting style that everyone’s performance is pitched at.  There is enough winking-nodding-tongue-in-cheek acting style to make anyone turn off the film, but this irritating acting style works in favor of the film.  Much of the film is spent actively rooting against these kids.  Many will recognize Kristin Davis, who plays her second tier supporting role as everyone else.  Those wishing or hoping this is an amazing gem should temper their expectations.  Davis’ work here is nominal at best.

The film is not a refined approach to horror storytelling. Doom Asylum is quite the opposite.  The film manages to push itself from cliché to full-on stupidity in no time flat.  Rather than being inventive, the film goes for the ‘shock and awe’ of elaborate gore filled set pieces.  In fact, the Special Effects works here is great and on par with the demented work that Tom Savini was doing in this time period (e.g. the late 1980’s).  If those were enough then Doom Asylum would be one of the great forgotten horror films of the 1980’s.  Unfortunately, that isn’t the case.

What Doom Asylum is, is a great time to be had.  Especially for those into cult-style horror films.  For those fans, this is the real deal.  A genuine cult oddity filmed earnestly by people who were trying to make a good film.  Thankfully they didn’t make a good film.  Rather they made this.  Pair it with another cult classic Mannequin for the best Sex in the City actresses before they were famous double feature.

Regardless of your thoughts on the film the brand new 2K restoration from the original camera negative is amazing.  Arrow Video like Scream Factory did for Someone’s Watching Me has the transfer come in two flavors; 1.85:1 and 1.33:1.  The versions of the feature to watch is definitely the 1.85:1 as it was shot with this framing in mind, though the film was released direct-to-video and opticals finished in 1.33:1.  That is one thing of note as none of the opticals were finished on the negative both versions use the title sequence from the original VHS. They do tell you this upfront which is definitely a nice piece of transparency on Arrow’s part.  All that said Doom Asylum sports a beautifully balanced sharp transfer.  Knowing the history of this film, it’s never looked better than this release.  If you are a fan of this film get ready because Arrow has done right by it.

There are two commentaries one with screenwriter Rick Marx Brand another with the critic group The Hysteria Continues.  Both commentaries (DISCLOSURE: sampled about 50-minutes’ worth on each) together provide fun insight and just plain fun on this truly bizarre film and it’s production, release, and ultimate place in the pantheon of cult VHS titles.  Each commentary is worthy on its own but The Hysteria Continues commentary definitely gets the edge as they are a bit more free flowing and dare I say glibly about the entire proceedings.

Tina’s Terror is a 16-minute interview with actress Ruth Collins who plays one of the Goth Punk Band members and one of the final girls of the picture Tina.  Collins is a delight discussing how she got onto the project and the trials and tribulations of an independent production.

Movie Madhouse is a 15-minute interview with DP Larry Reven.  The interview goes in-depth on the physical production and low budget nature of the shoot.

Larry Revene Morgues & Mayhem is an almost 30-minute interview with make-up FX creator Vincent Guastini who made all of the great gore FX for the film.  The interview itself is more of a behind-the-scenes featurette that breaks down how he did all the wonderful various gruesome set pieces on a relatively low budget.

Rounding out the special features are 10-minutes worth of Archival interviews and a still gallery.

For any fan of Cult, VHS Horror Doom Asylum is going to be your jam of jams.  This forgotten D-Grade horror gem gets all the special features and a great transfer from Arrow Video. Recommended!!!