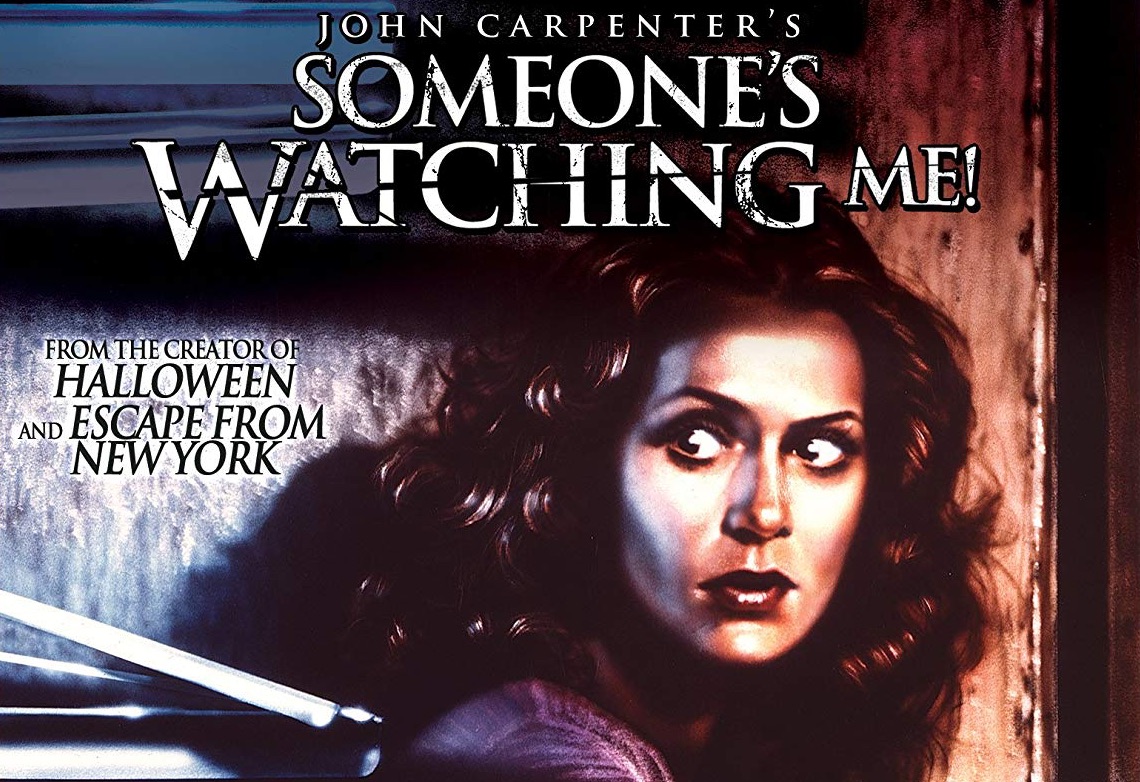 Adam finally gets to see the only John Carpenter film he hasn’t seen; Someone’s Watching Me.  The film is being released in a feature-filled Scream Factory Blu-Ray.

Someone’s Watching Me is a TV Movie of the Week that is definitely NOT a TV Movie of the Week. This is a statement and declaration not a criticism of the film.  At its core, the film shows a director finding his confidence in a genre that he would be eventually be titled the master of.  John Carpenter’s direction elevates Someone’s Watching Me from what some could consider a stylistic “dry run” for Halloween (which was shot mere days after this film completed its principal photography) to a tight and compact piece of tension with delights all its own.  The film not your average TV Movie but a refined piece of sustained dread that is better than current films of similar ilk.

TV Director Leigh Michaels (Lauren Hutton) is beginning a new life in Los Angeles after a bad break-up.  A new job at a local station, a new possible love interest (David Birney), and a new bestie (Adrienne Barbeau).  What more could a woman-about-town want?  How about a creepy-ass stalker?  No sooner settled into her life Leigh begins a psychological cat-and-mouse game with said stalker who may or may not be out to kill her.  Will Leigh, her new love, and best friend be able to figure out who the mystery stalker is before the sick game he is playing ends with her life?

The film is the most elegantly shot and directed TV Film of this era.  This is not just because Carpenter directed the film.  This isn’t based on brand recognition alone but rather the technical merit and know-how behind the film.  Carpenter understood the limitations of his story.  Those limitations were turned into advantages by the writer/director.  The film is photographed with a constantly roving camera, seeking out its subject, moving around ominous dark spaces and corners of the high rise apartment Leigh lives in.  This isn’t just testing out the Steadicam for future use, Carpenter and his camera crew find their own film language.  Someone’s Watching Me feels more like an evolutionary step to Halloween than merely an impersonation.

The budget and time constraints, like in most of Carpenter’s career, make the movie better.  Someone’s Watching Me is a claustrophobic film by design, having only one main set and a few additional ones.  This psychologically aids the tension of the entire piece.  Leigh has nowhere to go except back to the place she is most terrified of, her apartment.  The set pieces use the stifling spaces in the apartment to its advantage, as the audience is never sure who or what could possibly come after Leigh.

The film benefits from Carpenter’s understanding of how to build tension within a set piece.  It’s the small details, problems to solve, things not going as planned that could mean life or death.  Someone’s Watching Me benefits not only from its director but finding a willing and capable leading lady in Lauren Hutton.  Leigh is not some Laurie Strode stand-in but an evolution of the “Final Girl” that Carpenter would perfect in Halloween.  Leigh is by turns anxious, wilted, callow, as she is strong, smart, and determined.  Carpenter as both writer and director is able to make text and subtext flourish within the film.  As Leigh behinds to gain her inner strength we see the camera become more focus, less wandering, embolden, confident.

Hutton is fantastic as the terrorized woman of the film.  The model turned actress pushes herself not seeing the material as “lesser” or beneath her.  Rather Hutton approaches the script and character as a challenge to live up to.  That fearless and unfettered approach allows the actress to give a rounded performance that a more seasoned actress would not have given.  The actor plays the reality of the situation rather than some shrill scream queen version or worse the weepy willow unable to do anything.

Carpenter’s script adroitly sidesteps the standard clichés of the genre.  There are no a-man-to-save-the-day moments that was the norm in this era.  Even Leigh’s love interest is not necessarily a heroic figure, rather someone for her to play off of.  There are great touches throughout the script.  Like Leigh’s history and past is never stated, only implied.  Or Adrienne Barbeau’s Sophie and her sexual orientation though disclosed is never made to be a self-import statement.  Rather Sophie is who she is and it’s a part of the fabric of the film.

Carpenter’s Someone’s Watching Me may be his least well-known or seen film but it’s not because of quality.  The film is a first-rate claustrophobic thriller.  One that will surprise even the biggest of John Carpenter fans.

Scream Factory has done right by Someone’s Watching Me.  The new 2K Scan Of The Original Film Elements comes in two flavors: 1.85:1 and 1.33:1 Aspect Ratios.  This small feature means the world to any serious cineaste.  This allows one to choose the original, correct aspect ratio, 1.33:1 which comes up window box on the sides, or the modified 1.85:1 which is updated for modern Widescreen TVs (whose ratio is 1.77:1).  It’s these types of small touches that elevate Scream Factory above and beyond its competitors.  The transfer itself is gorgeous showing off the 35mm photography as photographed.  Having done some comparisons to the material available on-line before this release and the results are night and day.  As one would expect from a TV Movie that originally aired 40 years ago.

The Commentary by Critic Amanda Reyes is funny and informative.  Reyes manages to delve out information about the production, John Carpenter, the cast and crew always making it a fun conversation rather than a dry dissertation on the matter.  Those that are interested in any way of how this film was made and its historical context definitely should listen to this commentary.

Adrienne Barbeau: Looking Back At Someone’s Watching Me is a great 10-minute interview with the actress and her role in the TV movie and how it leads to The Fog and other work with Carpenter.

Carpenter’s Enforcer is a 9-minute interview with John Carpenter Regular Charles Cyphers.  Unlike the Barbeau interview which was primarily about this film, the Cyphers interview is more of a career with Carpenter overview than specifically about Someone’s Watching Me.

Per the usual with Scream and Carpenter releases they have included another episode in the great fun series Horror’s Hallowed Grounds.  The entertaining 7-minute featurette focuses on the Apartment buildings used for the production.

John Carpenter: Director Rising is a 6-minute interview with Carpenter discussing in detail the selling of his script, production, and reception of Someone’s Watching Me.  The featurette filmed years prior to this release has Carpenter in a great mood discussing a film he is obviously proud of.  It’s worth watching for the director’s discussion of his pre-Halloween days as a screenwriter-for-hire.

A few very kitschy TV Promos and Still Gallery round out this package.

Scream Factory has put together a great edition for a Carpenter film in Someone’s Watching Me.  Highly Recommended!!!