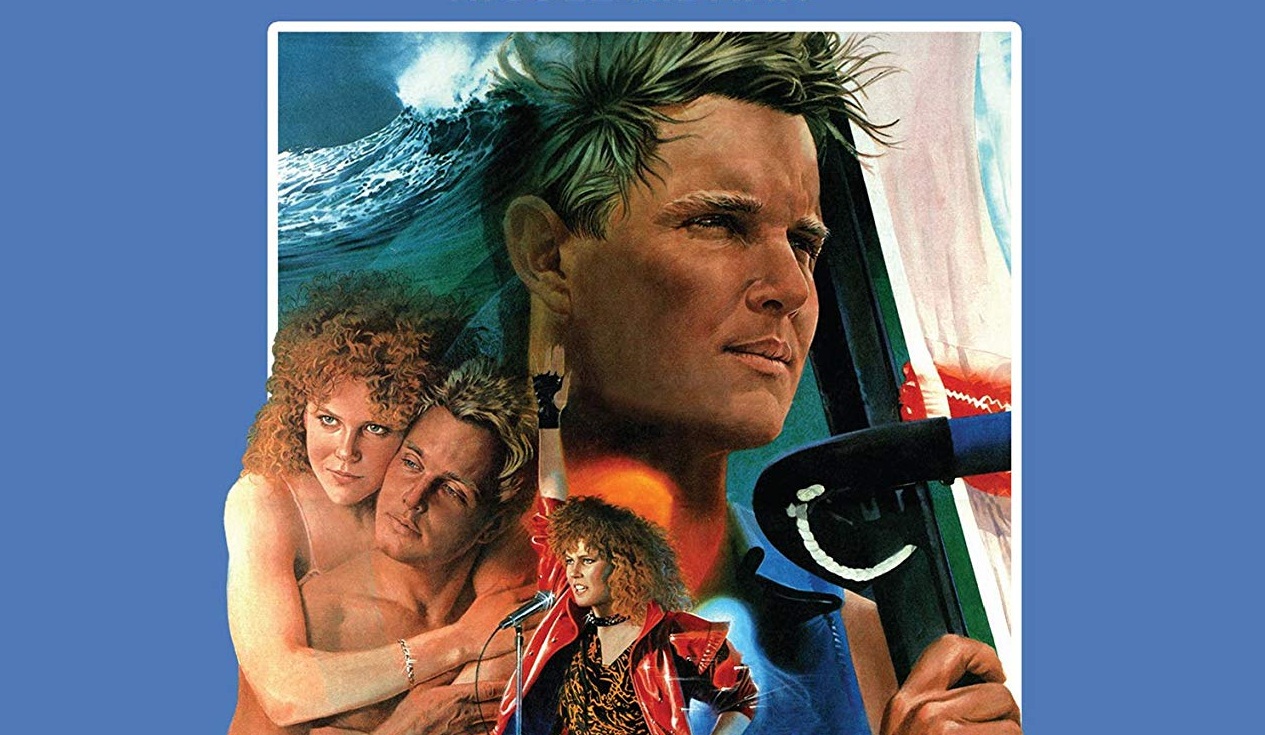 P.C. (Tom Burlinson) has it all; good job, awesome beach house, cool friends, and is the best of the best in the windsurfing game.  What he doesn’t have is a girlfriend.  Hoping from conquest to conquest, P.C. is your typical almost-douche-bag of the 1980’s.  It isn’t until he sees and hears Jade (Nicole Kidman) that he realizes his life isn’t complete.  Those pop jams belted out by Jade and her band call to P.C. and are too much to resist.  Quickly, the two begin a hot and heavy romance that causes P.C. to forget everything but Jade.  A romance that could cost P.C. his job, a chance at Glory at the local Wind Surfing Competition, has the young bloke reassessing not only his life but himself (a welcome change).  Can he sort everything out in his life, career-relationship-wind-surfing by the credit roll?

Of course, that last sentence was a rhetorical one.  Director Vince Monton and legendary Screenwriter Everett De Roche (the man wrote half of the now classic Ozploitation films from 1978 – 1988) create a film though paint-by-the-numbers in the same way that The North Shore is but done with an uncommon sensitivity and detail to the romance between P.C. and Jade.  Though the Wind Surfing is the primary plot, it’s the relationship between the two lovers that makes the film interesting.

The relationship isn’t just some sort of mile marker or trophy for P.C., they make Jade a fully realized character.  Jade has a singing career that she cares about and that she takes seriously.  One of the most refreshing aspects of the film is that Jade never drops her interests in favor of P.C.’s.  She does help him and is interested in his but she doesn’t lose herself.  Something wholly refreshing, triply so considering that the film was made in the mid-80’s at the height of Male dominance.

Monton and De Roche understand that we need to care about these two in order for anything to work.  They, Burlinson, and Kidman all contribute to give this relationship real energy and heft.  One will be genuinely surprised by the actual sensitivity they bring to a summer romance. You care because these two characters care.  Watching Kidman as Jade, one completely understands why she became a huge Star and Academy Award-winning actress.  Kidman’s Jade is fully realized, young woman.  There’s a maturity to the performance that is even more shocking when you realize that she was 19 at the time she made the film.  The performance is played in the eyes and on her face.  It helps greatly that the role isn’t just written as a goal or story beat for Burlinson’s P.C. to reach or achieve but a character he must talk to, work with, and ultimately grow to earn.

When one thinks of 80’s Teen Romances, few live up to any expectations one has for a good film, Windrider does.  It’s a charming success of a film, thanks in large part to the knowing script by De Roche, solid direction by Monton, and appealing performances by Nicole Kidman and Tom Burlinson.

The transfer is decent but do not expect a glorious remaster of the film.  Judging by research I’ve done on the source material, this is and possibly will be the best Windrider has/will ever look on home video.  MVD has definitely found the best material out there and done what it could to clean up the transfer they were given.

The commentary is the primary feature.  Monton and De Roche are joined by Mark Hartley, the director of Not Quite Hollywood, who moderates the proceedings.  Monton is definitely the more vocal of the two, though De Roche does contribute some great anecdotes about the development and production of the film.  Monton is honest, with a dash of humor, about the film’s disappointing box office in Australia, and working with Kidman. A solid commentary.

The Music Video and Music Promo starring Nicole Kidman are the kind of cheeky fun that needs to be seen to be believed.  Plus, Kidman belting out a rock tune ala Joan Jett, what’s not to like?

The Windsurfing Promo and Trailer another kitschy visual treat.  Also, it will give you an understanding of how the film looked before Blu-Ray/DVD.  In a word… not appealing.

MVD Rewind Collection’s Blu-Ray of Windrider is out now