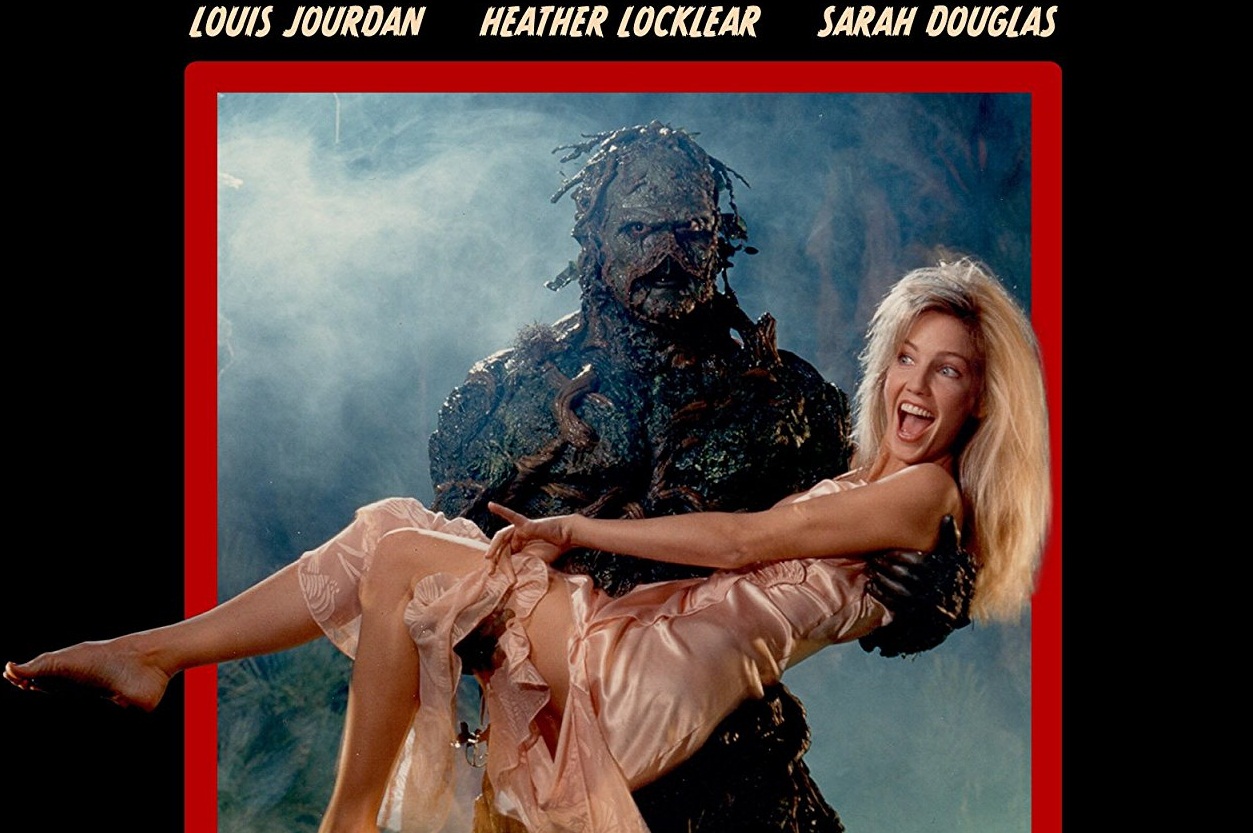 Adam goes all googly eyes Jim Wynorski’s The Return of Swamp Thing.  It has nothing to do with Heather Locklear and everything to do with the great Blu-Ray Edition released by MVD’s Rewind Collection.

So… let’s be real here. You want to think the original Wes Craven Swamp Thing is better.  It’s not.  Nt by a long shot.  Jim Wynrosky’s goofy fun sequel is the Abbot & Costello Amblin Monster Mash film is far superior in every way to the original.  Craven’s film fails because it takes itself too seriously.  Wynrosky’s sequel doesn’t dare go that route and finds a lighter tone that works in its favor.

Taking only bits and pieces from the original The Return of Swamp Thingrefashions the series (if you can call two films a series) as an adventure film.  Creature from the Black Lagoon vs. Other Monsters if you will.  Swamp Thing now protects the swamps from poachers, mutants and the like.  Through a series of events Abby Arcane (Heather Locklear) goes to the swamp to visit her Step-Father, Dr. Arcane (Louis Jourdan) seeking information about her recently deceased mother.  Of course, Abby gets involved with the mishegoss between Swamp Thing and Dr. Arcane.

The clear MVP of this film is Heather Locklear.  The actress fresh off of Dynastyjumps head first into the role.  Her performance as Abby has the same sort of arched tone that would make her the Queen of 90’s with Melrose Place.  Abby isn’t the Ice Queen that Amanda was.  Locklear literally tongue-in-cheek’s her entire way through the film on her charm and star power.  The actress uses her smile and killer delivery to make even the most clichéd of lines seem brilliant.  After watching the film one has to wonder why one no (re Sam Raimi) never thought of pairing her up with Bruce Campbell.  Yes… she’s that good in this film.

Wynrosky’s film cares about nothing beyond a lot of goofy fun and action.  No ecological message.  No scientific subtext.  Just good old fashioned Monster vs. Monsters throwback.  Wynrosky keeps everything moving so quickly you never bother to question any of the very clunky plot mechanics.  That includes the you-have-to-see-to-believe Swamp Thing Abby sex scene.  Though keep your minds out of the gutter, this movie is PG-13.

The Return of Swamp Thing is exactly what you want from a forgotten 80’s film.  A delightfully sincere fun, goofy monster bashing romp.  The film has aged much better than anyone would have thought or even hoped for.  Yes, The Return of SwampThing is a six pack of fun. Make sure to turn up the sound extra loud for the title sequence because, yes, they do use Born on the Bayou by Credence Clear Water Revival.

The Brand-New 2K High-Definition Transfer is beautiful.  As Wynorski has commented on the recent group commentary the film has never looked better. The transfer done by MVD for this edition perfectly reproduces the mostly night darkly lit film.  The image is razor sharp and has beautiful contrast levels.  The image even surpasses the transfer done for the Original Swamp Thingby Scream Factory.

MVD included not one but two commentary tracks for the release.  A newly recorded group commentary featuring Wynorski, composer Chuck Cirino, and editor Leslie Rosenthal.  The other a solo commentary by Wynorski recorded back in 2003.  Each commentary provides various good tidbits of information about the Savanah based production.  As with a low-budget production of this sort, there are many-many production stories, most of them involving Louis Jourdan.  In the solo commentary, Wynorski mixes his production stories along with a few tech tidbits.  The group is comprised of all production annetodes.  Great breezy commentaries both.

The 18-minute Interview with Director Jim Wynorski is a bit of lively conversation that Wynorski produced himself.

The 5-minute Interview with Lightyear Entertainment Executive Arnie Holland is a bit more fascinating as we learn that he owns the film and was actually the Line and Associate producer of the film but took no credit.

The 7-minute Interview with Composer Chuck Cirino discusses more than just the score but also the incidental music and the troubles with having to sync up Piano playing.

The 9-minute Interview with Editor Leslie Rosenthal discusses primarily the difficulties the Chopping Mall-editor had putting together the opening Title Sequence in an era of Steenbecks and analog film editing.

The Promo reel is a 5-minute true-blue from the 1980’s sizzle reel promoting The Return of Swamp Thing, obviously intended for Cannes or any of the other Foreign film markets that pop up year in and year out.  It’s glorious and may be the best feature of the disc.

Equally awesome are the two PSA’s that were filmed with the Kids from the film and Swamp Thing himself. Any child of the 80’s will remember these showing during WWF Saturdays.

The Photo Gallery included is 2-minutes video with score accompaniment.

The Original Theatrical Trailer, 2 TV Spots, 6 Promotional TV Clips round out the extras with a huge dollop of 80’s awesomeness.  Other than the Theatrical Trailer, which was actually restored from an original 35mm print of the trailer, the footage is all from VHS or ¼ Wide dupes.  Those that love the murkiness of VHS and Cable TV of the era are going to eat this all up.

The Return of Swamp Thing is a no-brainer for any Cult-Classic Fan.  MVD’s Rewind Collection had produced a wealth of features and a beautiful transfer. DEFINITE RECOMMENDATION!