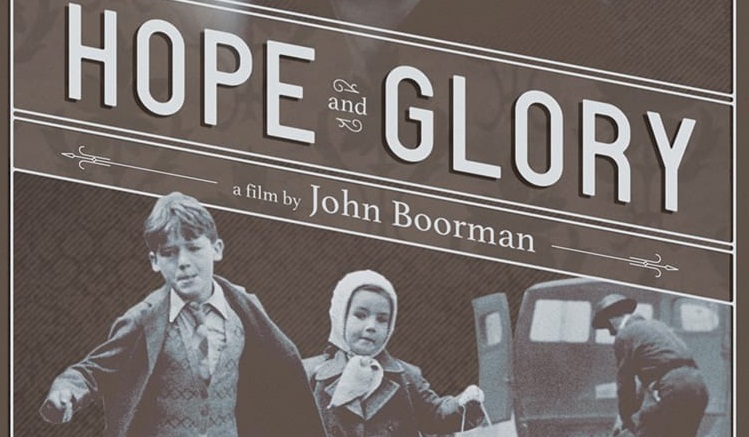 Adam reviews one of the best films of the 1980’s; John Boorman’s Hope and Glory.  Recently released on Blu-Ray from Olive Films.

Nostalgia is horrible.  It has become cinematic nadir. Few films can evoke that word not as a criticism but as a compliment.  Nostalgia in a way that informs on an era, helping us understand it wasn’t stifling and righteous as historians would have you believe.  John Boorman’s wonderful Hope and Glory does that with its sense of nostalgia to perfection.

From all film accounts of WWII, life in Britian had unexpectedly stopped from the start till the end of the war.  No laughter.  No sex.  No music.  No booze.  No good times.  Especially no time for childhood leisure.  Boorman’s film fixes that perception with a sledge hammer.  Hope and Glory fixes its lens on the in-between of civilian wartime life.  What many would consider the “unimportant bits”.

Boorman with Hope and Glory is not making a film about wartime but childhood during wartime.  Those “unimportant bits” of laughter, sex, music, booze, good time and childhood leisure give us a different perspective on WWII. The film shows civilian life away from the war but close enough to it to make room for the truly bizarre to occur.  Exploding dilapidated dirigibles, glimpses of low air dogfights over the streets of suburban London are regular occurrences seen from the eyes of 10-year-old Bill Rohan (Sebastian Rice-Edwards).

Thankfully, the director’s keen wit throughout refuse to color everything in that rose patina that fills these type of entries.  Children curse and tear apart bombed out homes like they were Punks out of Thatcher’s England.  Teens get pregnant after late nights of dancing and boozing.  Soldiers go AWOL for declarations of love.  Adults discuss the love and life that could have been.  It is all done through Boorman’s unexpectedly keen, loving eye, this is afterall the director of some of the most stridently masculine films of all time (Deliverance, Point Blank, Zardoz).

As clean and stately many British films about WWII are, Hope and Glory are messy and vibrantly alive bursting at the seams with the unexpected dirtiness of life that surprises and horrifies.  Boorman shows us with the most humane lens that life does not stop because of war; it goes on in spite of it.  Few films about childhood, family and war are as good as Hope and Glory.

Olive Films continues their trend of getting excellent transfers.  The beautiful cinematography by Philippe Rousselot is perfectly reproduced for this Blu-Ray Release.  The film has always had a slight sepia tone that is present here.

No Extras were included in this release.

This one is a no-brainer for any cineaste Boorman’s Hope and Glory remains a classic that should be in any collection.  HIGHEST POSSIBLE RECOMMENDATIONS!!!!

Hope and Glory is out now on Blu-Ray from Olive Films.