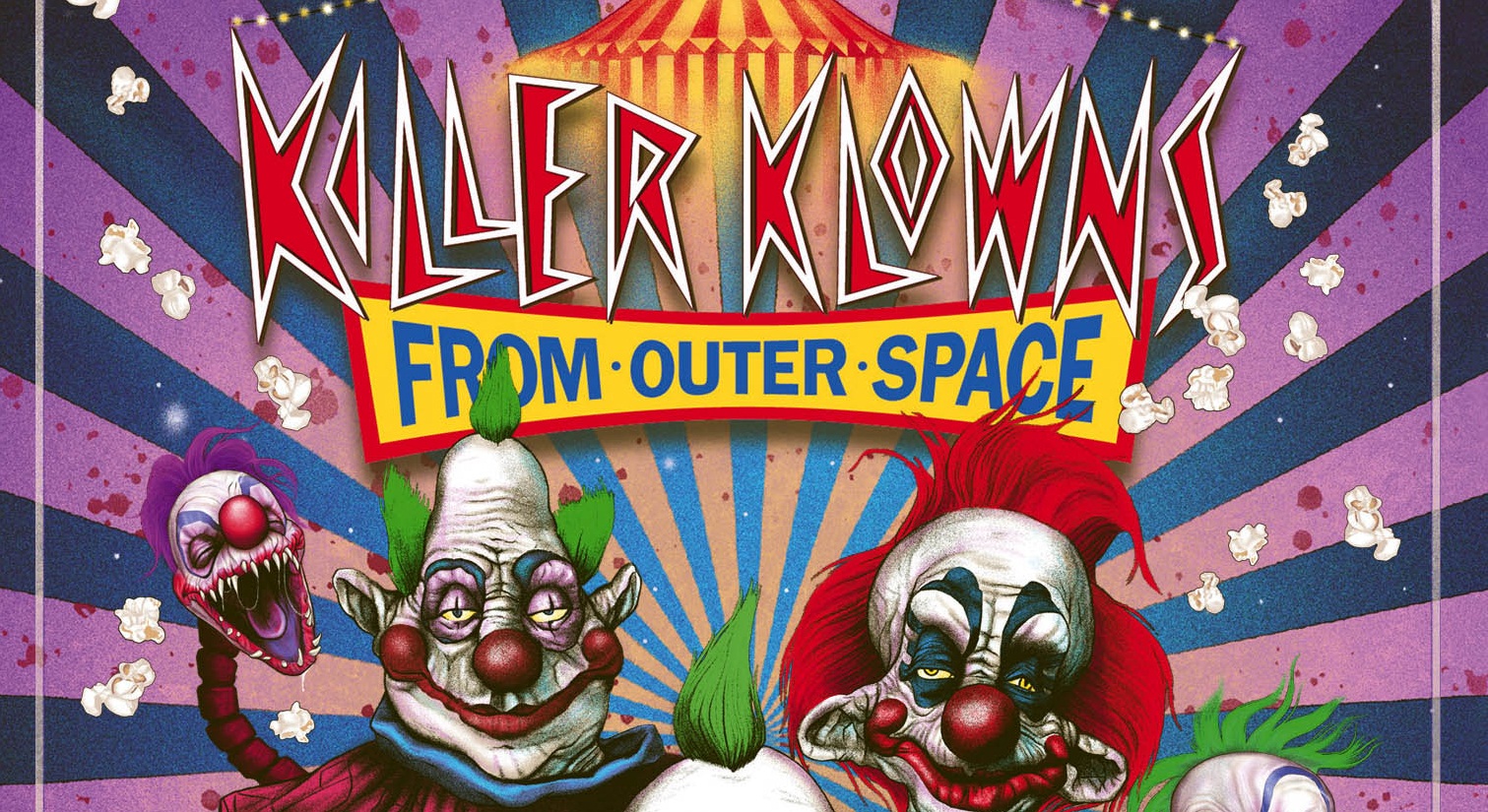 When it comes to the “Killer _____” subgenre, for this reviewer’s money there is only one true Champion.  It’s the Chiodo Brothers magnum opus; Killer Klowns from Outer Space. The film is a strange mix of sci-fi invasion film, high school ‘losing it’ comedy, small town Capra-esque drama, and all insanity.  The film succeeds because it takes everything character, story et. al. seriously.  Not in tone but in its execution.  Killer Klowns from Outer Space doesn’t do anything by half-measures rather fully committing to being a fully realized film.

The premise is simple; an alien race lands in a small town and mayhem ensues.  The fact that these Aliens are shaped like Clowns and use circus style distractions and weapons to lure and decimate the townfolks is one of the many delights of the film.  Rather than a simple A-B-C alien invasion film writers Stephen and Charles Chiodo have created a film that set pieces are as clever and inventive as anything in the Saw franchise.  The Chiodo’s understand that it’s the details of what these murderous Alien Clowns do that makes their film so much fun.  Killer shadow puppets, balloon animals that attack, and cocoons made of cotton candy are some of the inventive weapons used against the humans in the film.

Even thirty years on the scale of what the Chiodo’s were able to squeeze out of their tiny budget is impressive.  It’s not just the Make-Up FX but the Visual FX and the Stop Motion work that help make this seem like a much bigger production than you would expect.  The Chiodo’s career in Stop Motion animation, design and FX work, in general, aided this greatly. Their understanding of what it takes to pull off a lower budget FX-driven film is paramount to the film’s success.  Many directors do not understand the placement of the camera for FX work of any kind to succeed is an art form in it of itself.  That is not even considerations to the needed skill sets of being able to tell your story visually.  The Chiodo’s have both skill sets with a certain amount of style.  So much so it’s a wonder why the brothers did not get bigger scale film work after this was released.

Killer Klowns from Outer Space is not just another fly-by-night supposed Cult Classic, this is the real deal.  Stephen, Ed, and Charles Chiodo have created an insane Alien Invasion film that works as well as anything that came before or after.  It’s just with a ton of Clowns.  Scary.  Rabid.  Nightmarish.  Clowns.  Killer.  Clowns.  Beware…

Arrow Video has gotten a Brand new restoration from a 4K scan of the original camera negative.  The results are astonishing.  The film has never looked better. The scan of the negative seems have helped the VFX as the matt lines have been diminished from previous iterations.  Bravo to Arrow on this transfer is one of their best.

You know it’s going to be a deep-deep-deep dive of a Blu-ray when there’s a 10-minute making of on the theme song for your movie!!! Yes, a making of the theme song.  This new Arrow edition collects all of the content from the original MGM DVD Release, Arrow Video’s 2014 UK Blu-Ray, and a few new extras.  There are well over 5 hours of extras (including the commentary).  Let me repeat that… 5 hours of special features just devoted to Killer Klowns from Outer Space.

The commentary is a lively informative affair with Stephen, Ed, and Charles Chiodo from the original DVD release of the film.  Surprisingly, a lot of the anecdotes from the production and discussions does not overlap

Let the Show Begin! Anatomy of a Killer Theme Song is a new 10-minute interview with the punk band, The Dickies and how they created the theme song for Killer Klowns.

The Chiodos Walk Among Us is a 23-minute featurette that looks back at the Chiodo Brothers history with movie making from their early days on Super 8 all the way to their Student films in college.  It’s a great piece giving context to who the Chiodo Brothers are but also just how talented and hardworking they have always been.

The Short Films is the real gold mine here as the previous featurette is a primer to these six short films which range from 7 to 17 minutes.  There is a commentary on Beast from the Egg by the Chiodo’s.  Most are silly fun but they do indicate filmmakers with promise and an evolution in Style and understanding of filmmaking.  Any fledgling film student will find this fascinating.

Tales of Tobacco is an 18-minute interview with Grant Gramer, who plays Mike Tobacco, on how he got the job and the cult status of the film.

Debbie’s big night is an 11-minute interview with Suzanne Snyder, who plays Debbie Stone, similar to Cramer’s interview discusses the casting, production and impact Killer Klowns has on her career.

The making of Killer Klowns is a 22-minute “interview” with Stephen, Ed, and Charles Chiodo.  I put the interview in quotes because this is more of a making-of than an interview as they claim in the video and the packaging.  Yes, the three brothers do talk about the making-of Killer Klowns. There is an ample amount of production photos and B-Roll/BTS footage that plays over the brothers talking it feels more like a featurette than a traditional interview.

Visual Effects with Gene Warren Jr. is a 15-minute interview with Charles Chiodo and Gene Warren Jr. from Fantasy II Film FX shop.  Again this one could be considered more of a featurette as they use video footage and production sketches to illustrate what Warren and Chiodo are discussing.

Kreating Klowns is a 13-minute interview with Charles Chiodo and master fabricator Dwight Roberts as they discuss the making of the props, miniatures, and makeup appliances for the production.  There’s a wealth of pre-production drawings and behind the scenes video of how the effects shop worked to make any FX fans out there happy.

Komposing Klown is a 13-minute interview with musical composer John Messari and how he came about getting the job over 40 different composers and how The Dickies got involved.

Klown Auditions is 4-minutes of what you expect.

The Deleted scenes amount to two 2-minute scenes.  One is an extension of the final chase scene inside the Circus Tent Space Ship.  The other is a scene between Mike and Deb as she describes why she hates Clowns. There’s nothing in these deleted scenes to write home about.

A Blooper Reel, Image Gallery, and a trailer round out the disc’s features.