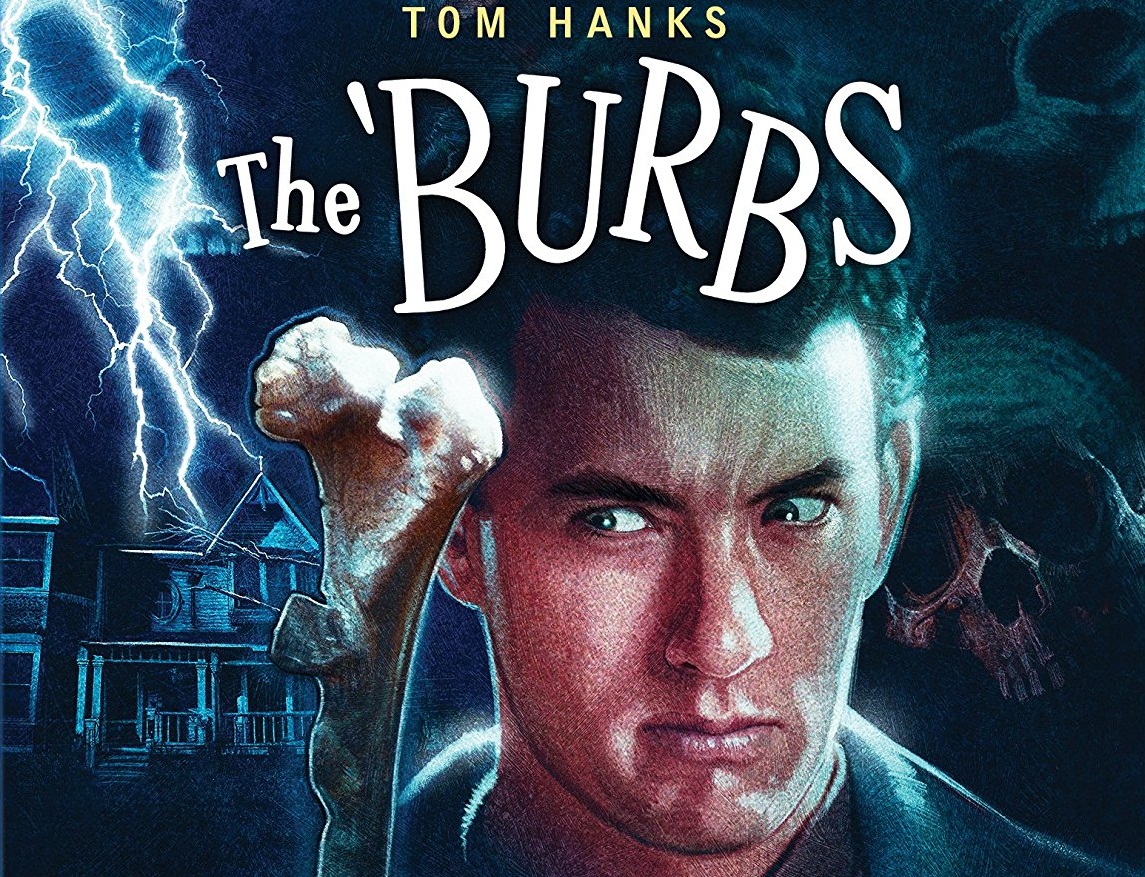 Adam takes a walk around Joe Dante’s The ‘Burbs, courtesy of Shout Select’s new Blu-Ray and loves what he sees.

The ‘Burbs is the kind of knowing cinematic mashup that only Joe Dante could do.  Both a comedic homage and a straight-ahead genre film.  Coming off an amazing run of films that included Gremlins, The Explorers, and Innerspace, The ‘Burbs may be the best of the bunch. The film is Dante at his wise-ass best.

Tom Hanks plays Ray a family man away from his 9 – 5 job for a week-long staycation (before they became a thing).  Looking for a relaxing week of nothing, Ray gets more than he bargains for.  Art (Rick Ducommun) and Rumsfeld (Bruce Dern) his neighbors find a way to suck Ray into their curiosity with their new neighbors the Klopeks.  The Klopeks’ home seems to be the epicenter of increasingly stranger and stranger occurrences.  With their much-hated neighbor Walter having gone missing and seemingly random clues pointing to foul play…  these three men are sure that the Klopeks are murderous psychopaths.

Dante working form a deft script by Dana Olsen (Memoirs of an Invisible Man) creates a film that’s part horror, part comedy.  The script understands the humor is inherent in the concept and finds the comedy within the character rather than creating a sitcom-style series of gags as the fashion of the time.  Ray, Art, and Rumsfeld are all middle-aged children with too much time on their hands.  The script makes the smart decision to never show them as heroes.  Much of the humor derives from that very fact.  How this trio eggs and bullies each other into increasingly stupid and dangerous situations is the deranged heart and comedic gold mine of the film.

The ‘Burbs though a star vehicle for Tom Hanks is built like an ensemble piece.  The murderer’s row of actors is amazing; Dern, Ducommun, Carrie Fisher, Wendy Schaal, Henry Gibson, Courtney Gains, Corey Feldman, Robert Picardo, Dick Miller, Brother Theodore, and Nicky Katt (in an early role). The work the cast does is a master course in comedic and genre performances.  Everyone manages to never sell jokes or do any sitcom style yucks.  Everything is grounded and comes from a genuine place.  Part of why The ‘Burbs has aged better than many of its contemporaries is because it doesn’t make a joke out o any of the characters.  Even the Klopeks come from a very real place.

The Klopeks are in fact The ‘Burbs secret weapon.  What Gains, Gibson, and Theodore are able to create is very different than the rest of the cast but is outright amazing. The men could have played the Klopeks’ broadly for comedic effect.  Rather they go in the other direction, playing up the menace and oddness.  That menace is real and comes through in each of the actor’s portrayal of the three generation of Klopek men.  Dante knows that for the film to work the family must be genuinely menacing and creepy.

The ‘Burbs works as a comedic thriller that Dante ensures at every turn stays true to both genres.  That delicate balancing act is what makes the film so special.  Even in the filmography of Joe Dante.

Shout Select has produced together another amazing set.  Culled from the original Arrow Release and including new additional special features. This is the definitive release of The ‘Burbs.

The best feature and the one that everyone will be curious about is the Original Workprint.  The film plays out like something directed by Quentin Tarantino before Quentin was around.  Part of the fun is that the Temp Score is intact and is populated with the music of Bernard Herman and Ennio Morricone!  Along with the additional scenes that give an extra layer of characterizations make this as Dante discusses in one of his interviews “the better version”. Not to take away from the theatrical release, but this Workprint is extra special… especially for any die-hard film geek.

The commentary with Dana Olsen is solid.  It helps that UK Critic Calum Waddell, moderates the discussion and is able to guide the commentary to some great insights.

There Goes The Neighborhood: The Making Of The ‘Burbs is a 66-minute making-of documentary (originally produced for Arrow) that features many of the key players (Hanks, Dern, and Ducommun are notably absent) are here discussing all aspects of making the film.  There are some wonderful tidbits like Hanks and Ducommun’s contentious relationship, and Carrie Fisher’s wig (that she didn’t need). It’s an all-together great polished documentary.

The new Interviews with Director Joe Dante, Editor Marshall Harvey, and Director Of Photography (Additional Scenes) John Hora all seem to be concerned with the various endings that were written (and not shot), shot, and put together.  Though each does spend an ample time discussion the production itself, the ending is the main discussion.  It’s a great conversation it was a point of contention on how it should end.

Only one of the many Alternate endings is included.  This ending is essentially a longer version of the original.  There are some added character beats. It’s a more subdued ending without Corey Feldman’s great final line and Art’s wife coming home.

The Behind-The-Scenes Still Gallery, Stills And Posters Gallery, and Theatrical Trailer round out the special features.

Shout Select has done The ‘Burbs justice by giving it an amazing release.  Highest possible recommendations.

Shout Select’s Blu-Ray edition of The ‘Burbs is available on March 20th.