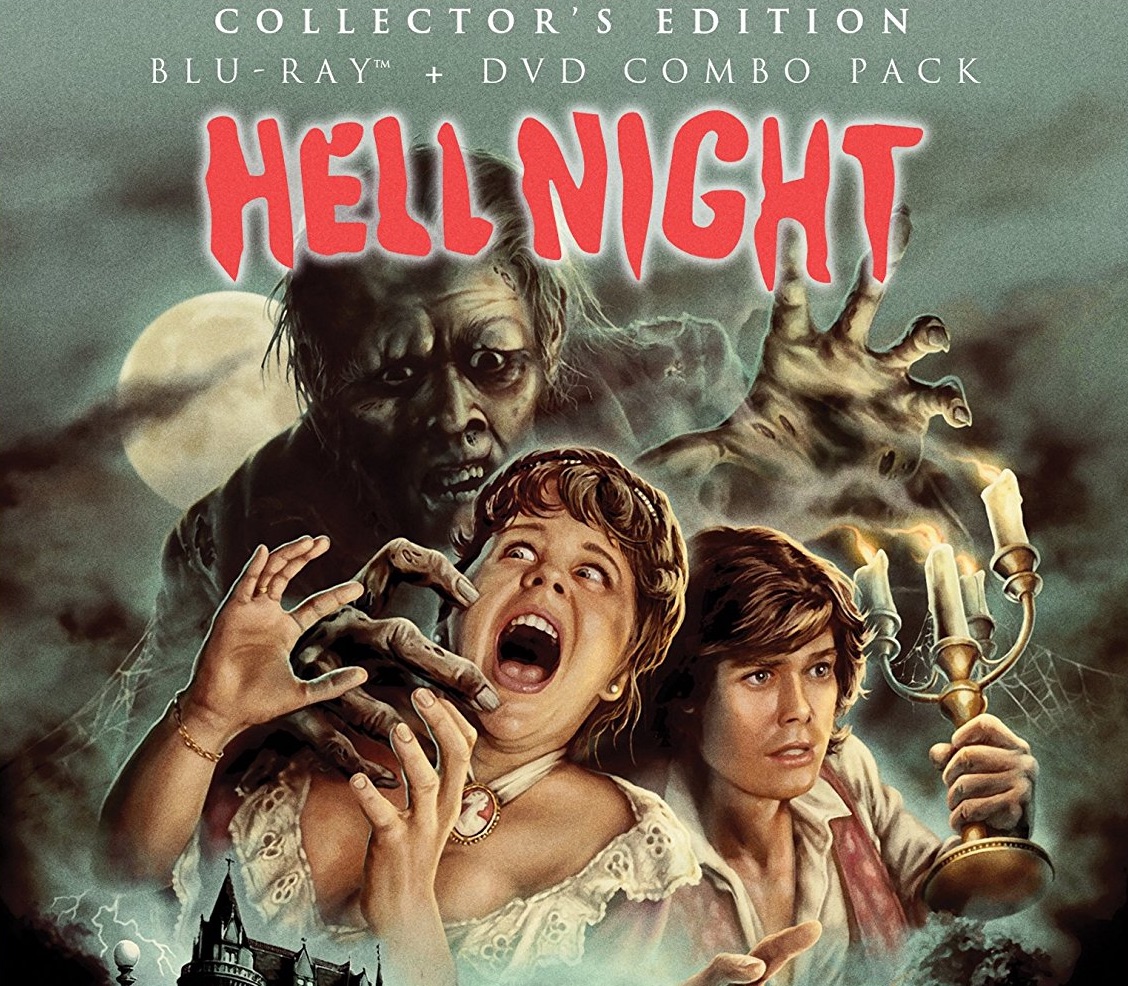 Adam takes a gander at the cult classic Hell Night being released by Scream Factory in a new Blu-Ray edition.  Is the film any good?  Or is another in the long line of Linda Blair starring films that never lived up to the promise of her debut?  Read more …

Talk about surprised.  Hell Night may be a pretty straight ahead slasher pic from the stereotypical early 80’s vibe but… the film has style to spare.  The film’s setup is enough to make even the most ardent of Slasher Geeks roll their eyes.  On the eve of a Fraternity and Sorority houses pledge week a group of prospective pledges has to stay in the local rundown mansion.  The mansion is, of course, a place of legend where a man killed his family forcing his young son to watch.  Yes, before you can say cliché the film starts offing its young characters.

Director Tom DeSimone has made a predictable slasher film though he seemed to be inspired by Barry Lyndon.  Yes, Barry Lyndon.  The one directed by Stanley Kubrick.  DeSimone and his cinematographer Mac Ahlberg (a Charles Band regular collaborator) shoot everything in natural candlelight.  Yes, that isn’t a typo.  DeSimone ensures that most of the film is bathed in that natural light and in moments it’s gorgeous.

Unfortunately, this stroke of genius is one fleeting moment as the film never raises itself above its slasher trappings other than the visual look.  The actors are all around acceptable.  Final Girl Linda Blair is alright but is not given much to do other than scream and say inane lines like “don’t go!”.  Hell Night is one of those cult slashers that doesn’t go as crazy as Mad House but has that visual style that is well worth checking out.  Slasher Geeks will know if they instantly want this one as they’ve been probably waiting for this one for a bit.

Scream Factory wrote this up about their new transfer and it also appears as you start up the disc: A Note About Our New 4K Scan:  We did an extensive search for the original film elements, but were unable to locate them. Therefore, this new transfer comes from a 4K scan of the best surviving archival 35mm film print of Hell Night. We did extensive color correction and film restoration to clean up any film damage. Because the print was missing some minor footage, so we have inserted a small amount of standard definition footage to deliver the complete film. We hope you enjoy this new restoration of this ‘80s horror classic.

With all that, Hell Night the transfer is as expected just okay.  If Scream Factory had not released this information many fans would have probably been disappointed with this release.  The transfer’s biggest issue is the worn and faded look of the picture.  The contrast levels are just not there for the film.  Ultimately the film works actually because of the transfer.  It feels like a really great grindhouse print that you would watch at The New Bev.

They include the following.

This disc boasts well over six hours of bonus content.

The Commentary is a fun group track that makes good use of Blair’s willingness to discuss the film at great length.

The Beauty of Horror – The thirty-five-minute interview with Linda Blair is the crown jewel of the set. Rather than just talking about Hell Night, this is as much a career overview as it’s about the film.

Hell Nights with Tom DeSimone – is a twenty-seven-minute interview with the director on location at the house they spent 4 weeks of night shooting in Redlands California. Having DeSimone going through the location recalling details is a fascinating way to get a better interview out of the director.

Facing Fear on Hell Night with Peter Barton – is a twenty-minute interview with co-lead Barton where he honestly discusses the cult of Hell Night and his career leading up to Hell Night.  And yes, people he does mention working on Friday the 13th Part 4.

Writing Hell – is a twenty-six-minute interview with screenwriter Randy Feldman who discusses the origins of his original screenplay (which was oddly inspired by Black Christmas).

Scream did something very interesting this outing grouping four of the actors together to discuss the film.  Vincent Van Patten and Suki Goodwin in Conversation and Kevin Brophy and Jenny Neumann in Conversation pair the respective movie couples to interview each other.  They run twenty-six-minutes and twenty-three-minutes respectively.  It gives a different dynamic to these extra features giving us a different perspective and some more information that you may not have gotten by a content producer interviewing them.

Gothic Design in Hell Night – is much more of a behind-the-scenes visual essay with Steven A Legler who was the art director on the film.  Kudos to Scream Factory by including this and also allowing Legler to describe what he does as many even more seasoned film geeks wouldn’t really know the difference between a production designer and an art director.

Anatomy of the Death Scenes – is a clever twenty-one-minute featurette that actually discusses how “the kills” are built and created.  It’s a great nut and bolts discussion and visual essay with DeSimone, Feldman, Legler, Make-up Artist Pam Peitzman, and Special Effects Artist John Eggett

On Location at Kimberly Crest – is a six-minute spotlight on the location of the now historic home that’s located in Redlands California.

Hell Night’s hours and hours of special features raise this Scream Factory Blu-Ray disc to a must own for any Horror/Slasher Geek.  Recommended.

Hell Night is out now on Blu-Ray by Scream Factory