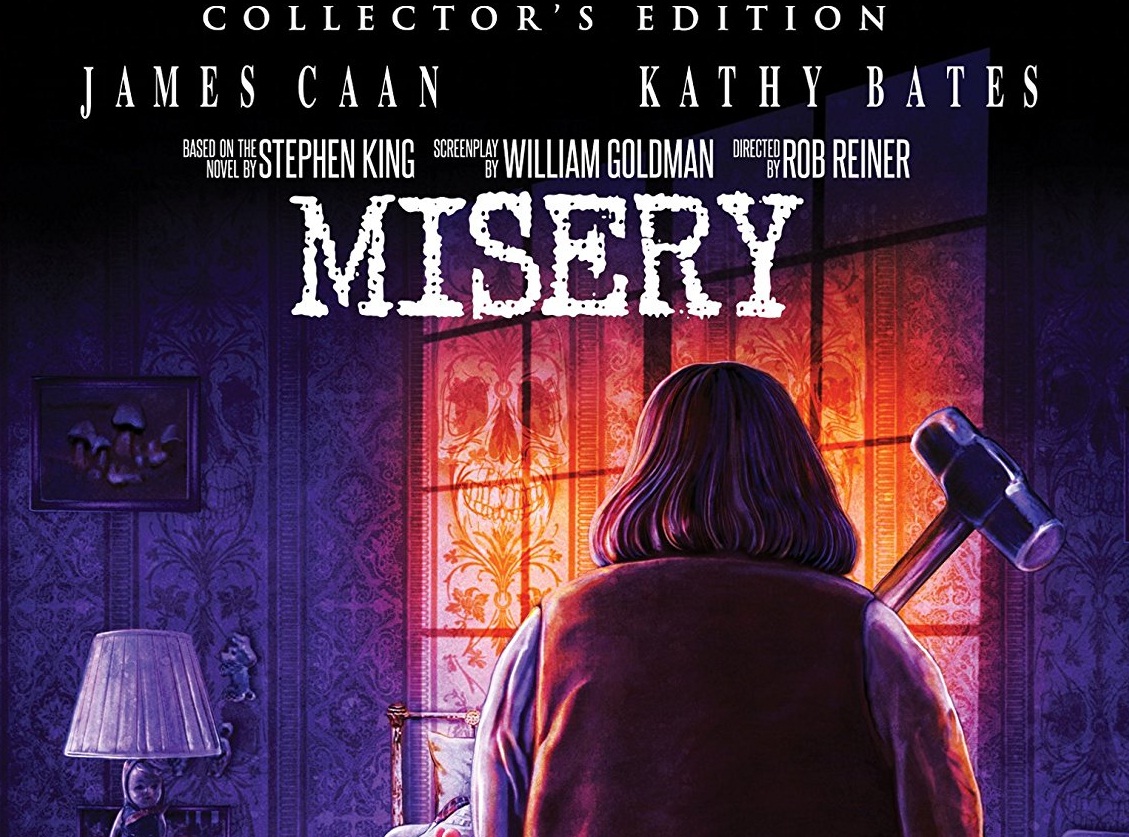 The B-Movie Isle/Adam is the number one fans of Rob Reiner’s Misery being released by Scream Factory in a shiny new Blu-Ray edition.  We continue our love of all things Stephen King with one of the best adaptations.  Is Kathy Bates’ performance is as great as it was thirty years ago?  Does James “Don’t call me Jimmy” Caan shed his tough guy image to play a writer held hostage by a crazed fan? Is that infamous lawnmower scene (stolen by Sinister) from the novel adapted?  Read more …

Rob Reiner is responsible for one of the best Stephen King Film adaptations.  I do not speak of Stand by Me but of Misery.  Working from a William Goldman script Reiner directs the film that smartly opts for terror and dread over gore.  The highly effective film pits Paul Sheldon (James Caan) the writer of the uber popular Misery novels against his “Number 1 Fan” Annie Wilkes (Kathy Bates).  Sheldon who thinks he was saved from certain death quickly realizes this fate may be equally deadly.  Annie’s semi-normal facade melts away to find a true psychopath.  Will Sheldon, who is hobbled (literal and figurative) by injuries, escape Annie.

Kathy Bates is genius in the part of Annie Wilkes.  Bates portrayal has only gotten more prescient as the decades have gone on.   The actress’ performance as Annie is not a one-dimensional villain.  Annie is as damaged as Paul’s legs and even as she does the most reprehensible things we are drawn to her.  At the time Bates was primarily a stage actor proves to be better than any known actor.  So much so she won (and deservedly so) the best actress Oscar in 1991.

Goldman and Reiner do not just strip the film of the novel’s more gruesome set pieces (good by lawnmower death) but also strip it of most of the addiction thematics dealing with alcoholism and drugs.  What is left is a potent parable about fandom that is more prescient now than ever before in our anxiety driven social media age.  By losing those parts that are unessential (but very essential to King’s writing), Misery becomes stronger, leaner and meaner.  The focus on the relationship between Stalker and Stalkee becomes about ownership both in a literal and figurative sense as Annie loses what little sense of reality she has.

Watching the film with current lenses is a fascinating dissection of fan culture and how fandom hates any change from artists.  King wrote Misery in response to that very fact when fans outright rejected his fantasy novel (which is pretty great).  No one wanted King out of the genre that had made him famous. They wanted him in that comfortable little box of horror.  This was his response which if you look at from the optics of a critique of fandom… it’s devastating.  King is spot on about the nastier sectors of fandom which in the film play out as clear eyed as the novel.

This epidemic has not stopped since King wrote Misery, it’s only gotten worse.  Now as soon as a filmmaker has created her/his first project “fans” are clamoring for when they are going to make a “Marvel Film” or make that “dark and edgy” Cheers prequel they’ve always wanted.  Fandom is placing creatives in boxes before they’ve had a chance to even find their voices and boxes they fit well in. Hearing Annie rant about Paul’s newest book plays out like what fandom writes in the comment sections of a review for a film they haven’t seen or a film that’s been announced.

Even with Paul complying to Annie’s every whim including destroying his current manuscript (a non-Misery book) Annie is an empty hole never to be filled.  As he begins to write the return of “Annie’s Misery” (her words not his) it becomes apparent that it will come down to him or Annie.  Reiner and Goldman pull no punches as they descent with Paul into Annie’s particular brand of hell.

The film ratchets the tension building to the a crescendo.  The classic mano-a-mano, hero versus villain showdown.  How it all plays out in the masterful third act should be enjoyed as a film not a review.  Misery is the type of Hitchcockian thriller that Hitchcock would have approved of and stands as one of the best if not the best film adaptation of a Stephen King work.

The NEW 4K Restoration From The Original Film Elements looks beautiful.  There’s a healthy amount of grain on the picture giving it an archival print quality.  The transfer brings the best qualities of Barry Sonnenfeld’s brilliant cinematography out.

The short review of this edition is wow… there’s enough content here to keep you busy till the end of winter or at least until the roads open up and they can fix the telephone lines. The two new featured interviews are fantastic and make up well over an hour minutes of additional content along with the two commentaries and archival featurettes.

Reiner’s 47 minute interview covers his road to directing Misery from running an improv group to All in the Family to Spinal Tap.  The director is a great interview/storyteller discussing how Misery came to fruition and the challenges he faced.

The Nicotero interview discusses the challenges and chances working on Misery afforded him and the group at KNB FX shop.  The interview is intercut with behind the scenes photos of the molds and dummies they used for the iconic work they did for Reiner and Co.

The two archival commentaries are great.  In separate commentaries director Reiner and screenwriter Goldman discuss their approach to the adaptation of one of King’s best works.  Both men are thoughtful and humorous.  Goldman has a bit more of a scholarly air about him where as Reiner feels like that uncle that regales you with great stories and anecdotes.  They are both well worth your time, especially those budding filmmakers looking at making a Hitchcockian thriller.

The Seven Archival featurettes not only go behind the scenes of the making of the film but interestingly delves into the psychology and phenomenon of Stalkers and Celebrity obsession.  The featurettes handle this with a certain amount of tact and understanding that you do not normally associate with “special feature” content produced for a big budget studio film.  Bravo for the creation of and inclusion here.

For this reviewer’s money Misery is the best Stephen King Adaptation put to screen.  It’s been given an amazing Blu-Ray edition by Scream Factory to match its greatness.  Highest possible recommendations.