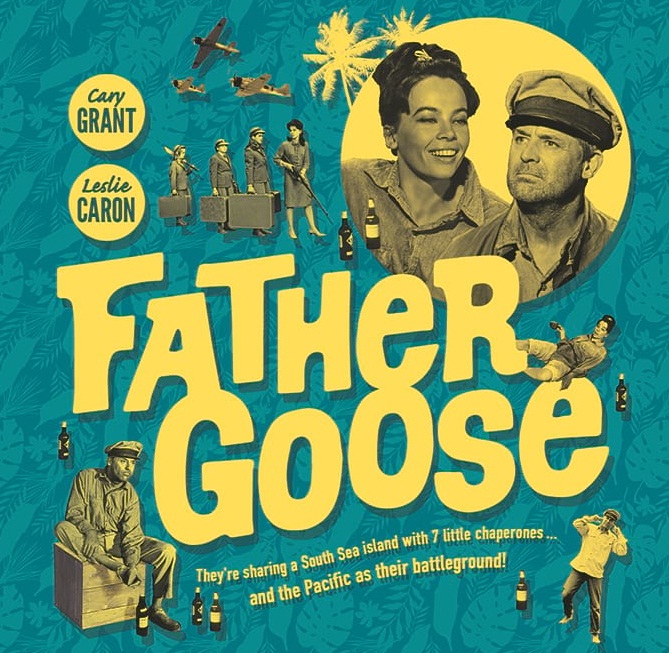 Adam takes a look at the Cary Grant action comedy Father Goose also starring Leslie Caron.  The Blu-Ray is being released by Olive Films in their Signature Edition line that’s limited to 3,500 units.  How does the film line up to modern action comedies?  Does Grant bring his signature wit and touch to the film?  Do Caron and Grant make a good onscreen couple though Caron was 33 and Grant was 60?  Read on…

The second to last film that Cary Grant starred in Father Goose is an amiable fun film.  Think of it as Gran Torino without the racism and darkness.  It’s one of those grumpy old men with a heart of gold performances that luckily only counts as one for Grant and not many.  Here Grant plays a scoundrel of a salty sea dog enlisted to the Australian Royal Navy as WWII has begun proper.  In order to keep his boat and stay fresh in booze Grant’s Walt Eckland code name Mother Goose becomes a coastal watcher ensuring that the Navy is in the known about possible incoming attacks.

Of course Eckland does not stay at his post alone.  A bid for freedom turns very wrong for Eckland as he finds himself saddled with half a dozen school girls and their ward (played by the amazing Leslie Caron).  This is the heart of Father Goose, Grant vs. the unruly school girls and Caron.  Part of the fun is seeing how quickly the school girls and Caron inject themselves into every piece Eckland’s life much to his chagrin.

Grant and Caron are sadly the biggest misstep in an otherwise delightful action comedy.  The insistence on having some sort of romantic subplot no matter how minor or surface level is wrong headed in every way.  Grant definitely shows every bit of his 60 years and it’s almost comical against Caron’s youthful 33 years.  As it’s only a minor plot point it isn’t as huge a problem as other films of the era but it does need to be noted that though Caron is great the forced upon romance could have been better suited by either recasting Grant for someone younger or Caron for someone older.

With that said Grant and Caron have great chemistry as does Grant with all of the kids in the film.  Father Goose understands exactly what it should be from the moment that it begins and through the entirety of the film.  It makes no pretensions about it being a film that is designed to be enjoyed and entertain all.  It’s a studio produced film in the best possible way.

Lush vistas, charming script and a game cast take this particular subgenre and gives it’s a shiny new coat.  Grant is great hear playing against type, his Eckland is dirty, tattered, drunk of a bastard.  He has no qualms with drinking in front of children and ensure that his needs are met before anyone else.  Father Goose is a semi-forgotten gem that definitely deserves to be rediscovered as it’s a fun time to be had by all.

The new Restoration from 4K Scan of Original Camera Negative looks beautiful in all of its early 1960’s era pastel glory.  The film was filmed on location in the Caribbean and it looks simply beautiful.  There’s some minor specs of dirt but that seems to be inherent on the print that is negligible.  The new scan brings out a razor-sharp picture without any sort of DNR.  They’ve managed to keep a healthy amount of grain on the transfer that makes the picture feel like a great archival print.

The two featurettes on the disc are great in giving context to the production.

Unfinished Business: Cary Grant’s Search for Fatherhood and His Oscar is a documentary about the later life of Cary Grant and gives context to Father Goose as a film and in his career.

My Father is an interview with son of director Ralph Nelson, Ted talking about his father and the making of Father Goose.

The commentary is pretty great commentary by Del Valle where he talks about the actual production (who knew Jamaica could stand in for the South Pacific).

The vintage “newsreel” footage of Leslie Caron is fascinating from modern lenses showing just how much things have not changed in the EPK-Game.

Father Goose is the sort of delightful twist that is going to distinguish the label’s boutique editions from Criterion and others. The film is a family adventure comedy that will delight any Film Geek.  Those willing to adventure will be justly rewarded.  Recommended.

Father Goose is available to purchase now from Olive Films.