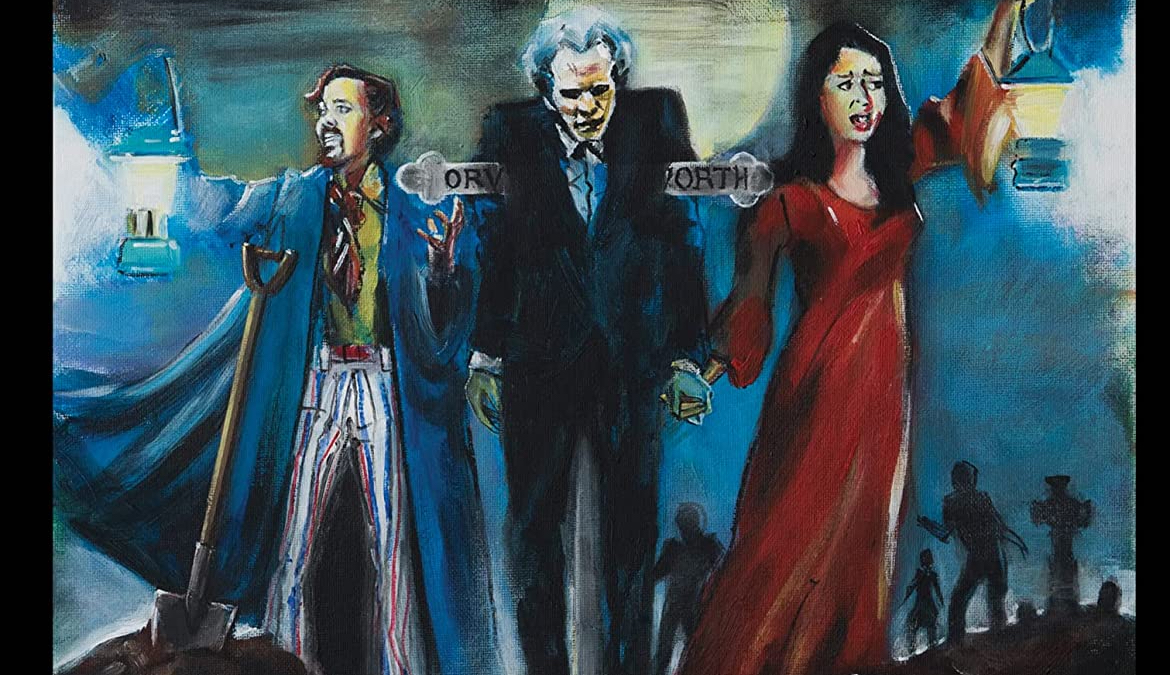 Bob Clark’s Children Shouldn’t Play with Dead Things is a riff on Night of the Living Dead.  VCI has pulled out all the stops for this 4K UHD release.

The older I’ve gotten the more I’ve appreciated the work of Bob Clark.  The director never met a genre he didn’t like.  From horror to action to raunchy comedies to mysteries to talking baby geniuses.  Before Black Christmas – he directed a horror comedy Children Shouldn’t Play With Dead Things.  Part Night of the Living Dead ripoff, Part Hippie comedy/satire but all undoubtedly Bob Clark.

Alan (Alan Ormsby) an egomaniacal director and part-time mystic – is there any other kind in the late 60s to early 70s – brings a theater crew and actors with him to an island off the coast of Miami.  Alan cajoles, bullies, manipulates, and generally abuses the actors and crew as he goes on about incantations and rising the dead.  Oh, yeah, Alan’s taken them to this island as it was used as a sanitarium and has one of the biggest unmarked grave cemeteries in the region.  Slowly but surely, he’s managed to push everyone away AND invoke the ire of ghouls aka the undead.

Clark’s film is more a fascinating document of the era in which it was made than an actual film.  Most of the film’s run time is filled with Alan Ormsby’s Alan speechifying and bullying his cast of unprofessional (inexperienced) actors.  It is only the slightest bit amusing to anyone that’s had to suffer an insufferable director of any kind.  The routine plot setup of “Alan says to do something” + “The Crew doesn’t want to” = “Alan abusing them verbally and physiologically” wears out its welcome very quickly.  It’s only when Val (Valerie Mamches) stands up to him with her equally toxic abuse of Alan and his massive ego.

When the film does finally get to the ghouls the film is already over.  Though they keep to the format dictated by the George Romero classic the film has none of its nervy terseness that makes that film after six decades still so urgent.  Though the ghouls and the twenty minutes of action is great in that Hershel Gordon Lewis style makeup FX work.  It just isn’t enough to make this truly a solid Horror Comedy.

Children Shouldn’t Play with Dead Things is ultimately a fun oddity of a director that would quickly figure out how to put together a film.  This unfortunately isn’t one of Bob Clark’s many classics.

The 4K restoration of the film is solid throughout.  VCI has taken a very trick film and turned in a good transfer.  Considering that the film was shot on a tiny budget and at night without much in the way of lighting, it’s a minor miracle that the film looks as good as it does.  The HDR creates a darker image, yes, but the range in the blacks makes for a solid experience.  The image isn’t a murky mess of previous incarnations (this review had the dishonor of comparing to) but rather lightyears ahead of those previous home-video versions.  All in all, VCI pulled out a minor miracle here considering all the factors going against it.

NOTE: The Commentary, trailer, and the DREAMING OF DEATH documentary are the only special features on the 4K UHD disc and the Blu-Ray of the feature film.  The rest of the special features reside on a bonus disc.

The Audio Commentary Track with Alan Ormsby, Jane Daly, and Anya Cronin moderated by David Greggory recorded in 2007.  The trio begins with how all three got involved with the project.  Some of the details include Clark having the title before he came up with the concept, the gravestones having names of cast members, the fandom that has only grown since the release, the filming in and around Miami Florida, working 20-hour days during production – after being promised “points” and never seeing that materialized, the collaboration of Ormsby and Clark during their college days and after, their first reactions of seeing the film, Greggory discussing Daniel Waters (screenwriter of Heathers) thoughts on the film, a larger discussion of Clark’s work here and after this film, some stories about Clark on their next feature, and much more.  The trio and Greggory deliver a lively and entertaining track filmed with personal anecdotes from the production.

DREAMING OF DEATH: Bob Clark’s Horror Films (72:20) – is an all-new documentary about director Bob Clark’s horror films specifically Children Shouldn’t Play with Dead Things, Death Dreaming, Murder by Decree, and Black Christmas.  The documentary charts Clark’s personal and professional career from his humble origins in Florida.  Some of the other details include his college days and beginning to collaborate with Alan Ormsby, the production of Children Shouldn’t Play with Dead Things, how the film managed a bigger release without any stars, the production of Death Dreaming, the production of Deranged (which Bob Clark did not “direct”) – reasons why he did not direct the Ormsby script as initially intended, the production of Black Christmas, the reputation and cult classic status of the film, the production of Murder by Degree – which is considered the last “horror” film of Clark’s career, Clark’s thoughts on his horror output as a director, and much more.  Includes new interviews by filmmaker Chris Alexander, Clark Biographer Simon Fitz John, Composer Paul Zaza, actors Richard Backus, Lynn Griffin, Art Hindle, and others.  This is truly a wonderful documentary that focuses on Bob Clark’s entries into the genre.

Video Introduction and Q&A with Alan Ormsby (33:32) – recorded in 2022 the all-new Zoom Chat with Ormsby covers all the “ins and outs” of Children Shouldn’t Play with Dead Things and much more.  Some of the details include the sequel plans they had for the film, working with Bob Clark and their collaborations during college and in film, the writing, and productions of Deathdreams, Deranged, what was his favorite of the films of the collaboration, a discussion with Popcorn – and what went wrong with that film, a section of fan questions – some good but mostly what you expect from fan questions, and much more.  Note, the interview is recorded with Ormsby on a Zoom Chat, which at the beginning of the featurette is noted of the terrible sound quality and the option to have subtitles to make it clearer in some of the rougher spots.

Confessions of a Grave Digger: Video Interview with Ken Goch (9:08) – This archival interview – some of the information included in the documentary – with Ken Goch who worked in the Art Department.  Some of the details including how he met and got the job on the production, about how locations were found, and other anecdotes.

Memories of Bob Clark: A video tribute to the late Director (10:08) – a video essay of sorts that gives context for his work and personal life, people share their thoughts and loving memories of the Late Bob Clark recorded after his tragic death.

The Los Angeles Grindhouse Festival from May 22, 2007 (11:27) – video footage filmed in between a double feature showing of Children Shouldn’t Play with Dead Things and Deathdream at the New Beverly Cinema.  Featuring Alan Ormsby, Albert Fischer, Carl Zittrer, and Ken Goch.  The information given is gone through in other special features but does get some great pieces of information about other Clark Productions.

Photo & Poster Gallery (4:54) – this animated poster gallery houses around 25 images.  The Gallery plays automatically though you can pause, you cannot navigate to the next image.

Tribute Video (2:00) – a short video of stills – taken from the film – with music from the soundtrack.

Radio Spots (4:25) – the radio spots play over images of the film and also popups of information on how and where they recorded these, and other interesting nuggets of information.

Children Shouldn’t Play with Dead Things may be just an interesting experiment, but the Disc and its special features are revelatory.  VCI has done an outstanding job giving this film its best foot forward.  Highest Recommendations for the Horror Crowd!!!