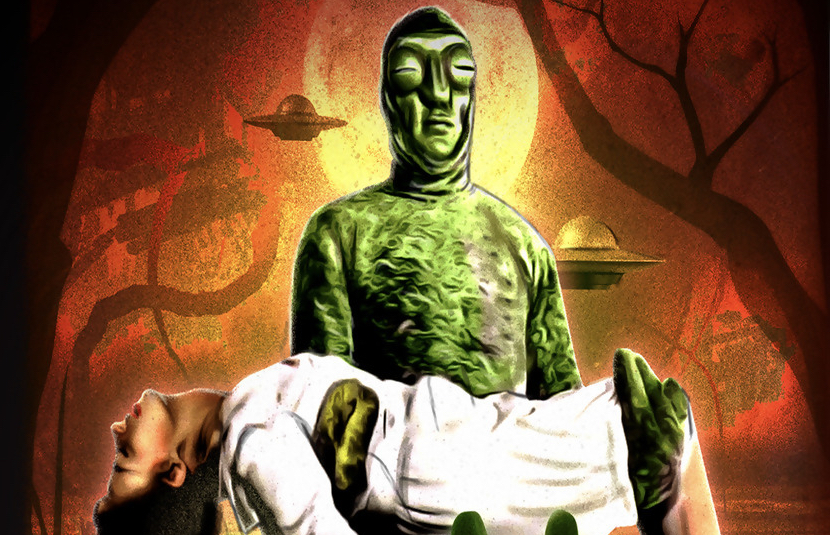 What a way to come out swinging… Ignite Films debut 4K UHD release Invaders from Mars is top to bottom a must-own definitive version of this Sci-Fi Classic!

I still remember the first time that I saw Invaders from Mars.  A freak accident caused an unintentional view of James Cameron’s Aliens one night.

I love it.  It also made the 8-year-old Adam very cocky.  My father felt it was appropriate to smack me down a notch.  A trip to the video store after the braggart Adam boasted “I ain’t scared of no aliens”.

By the end of the film with its circular ending and any hope extinguished for our hero, that 8-year-old Adam damn near had a crisis of faith.  The very thought of losing my parents scared me so much that it kept me up at night for weeks.  Never mind, ironically about a year from seeing the film my parents would begin a very nasty divorce all but locking that fear/trauma of seeing Invaders from Mars wholly and completely.

Thirty-five years later – and seventy years after its initial release – director William Cameron Menzies’ sci-fi horror kindertrauma cult classic Invaders from Mars still retains its fairy tale nightmare logic ability to strike as an effective bit of horror.  What still stands out is the near hallucinatory colors of cinematographer John F Seitz’s visuals, thanks in large part to the SuperCinecolor printing process.

The setup is effectively simple.  A boy David (Jimmy Hunt) one night watches an alien spacecraft land in his backyard.  David’s father being a scientist indulges the boy and investigates, only to return changed.  The boy begins to tell anyone that will listen including the police and other scientists that his father is an alien.  Unluckily, they begin to believe him, but it may be too late as it appears that the invasion has begun.  The final fight for Earth has begun.

Part of the power of Invaders from Mars is the cruelty it causally dispenses to its hero David.  The paranoia of something happening that no one believes has only become more prescient in this age of Fake News and Gaslighting.  Here it’s effectively used as children are rarely listened to or believed.

Though the third-act finale is a bit stiff it is more than made up for in its wildly cruel ending.  An ending that today still manages to be one of the meaner-spirited ends of a “kid’s film”.  With a viewing of the film in this new restoration, no one will doubt its visual power.  Albeit a bit hokey at times Invader From Mars still retains its nightmarish dreamy visuals and ability to transfix and lull you into its trance of terror.

This newly restored 4K UHD is an example of why it is so vital and necessary to restore films such as Invaders from Mars.  The 4K Dolby Vision Encoded transfer is reference quality good.  The image is beautifully psychedelic in its saturated color reproduction.  The grain structure gives the disc a look of a beautifully restored 35mm print, without any loss of sharpness or definition in the image itself.  The true standout is the colors though.  The film has always looked wild in the various home video incarnations but in 4K it’s beyond description just how stunning and dream-like Invaders from Mars truly is.  The only recommendation is to purchase a copy for yourself to see what all the considerable fuss and hyperbole – and justifiably so – this reviewer is making.

William Cameron Menzies: The Architect of Dreams (16:26) – in this all-new interview with Menzies’ biographer James Curtis and Pamela Lausen (Menzies eldest granddaughter).  Curtis begins his portion of the interview with Menzies’s work as a Production Design and in the Golden Age of Hollywood and how he approached his work as a director and designer.  Towards the final few minutes, Lausen joins the interview with Curtis and gives a personal account of him painting, and going to the premiere of Around the World in 80 Days.  Some of the details include Menzies early life, his work in Silent Era work in the likes of Thief of Bagdad, how work changed with the invention of sound, his co-directing ventures, the first solo directing entry Things to Come, which led to his work in Gone with the Wind – a few very interesting tidbits, his work in TV, his work on Invaders from Mars – how it came to him, the production, the shooting in color, the development of the script – and how it changed, the loss of the only copy of his storyboards, his final film Around the World in 80 Day, and much more.

Jimmy Hunt Saves the Planet (10:30) – this all-new interview with actor Jimmy Hunt who plays David begins with a discussion of his life as a child actor and his interest in the below-the-line crews.  Some of the other details include the movie itself, his memories of the production, working with Hilary Brooke and Leif Erikson, the infamous slap in the movie, the film’s legacy, his leaving Hollywood, and more.

Terror From Above (22:44) – this all-new featurette discusses the legacy and power of Invaders from Mars. Beginning with personal accounts by all involved this informative featurette that discusses how the film through the rise of television and shows like “The Million Dollar Movie” helped take Invaders from Mars from obscurity to cult classic.  Some of the details include how the film affected the subgenre of Alien Invasion, the rise of the Cold War and how it affected cinema, director Menzies’s career before directing was as a production designer and how this helped with the nightmarish vision, the comic book style visuals, how the plans to shoot in 3D changed and why, the haunting music and how it was composed, and much more.  Featuring comments by film directors John Landis, and Joe Dante, editor Mark Goldblatt, special visual effects artist and two-time Oscar Winner Robert Skotak (foremost expert on Invaders from Mars), and enthusiast and film preservationist Scott MacQueen.

Restoring The Invasion (6:50) – A micro commentary track by film restoration supervisor Scott MacQueen is a vital part of understanding just how special this restoration is.  Beginning with the material and origin of said materials MacQueen gives a technically pragmatic dissertation on the various issues with the image, what it took to correct those issues and the final result.  This seven-minute featurette does an amazing job at showing the time and effort that goes into not just this restoration but all full restorations.

TCM Festival Intro (7:02) – filmed during the 4K restoration’s debut at Turner Classic Movie Festival in Hollywood in April 2022.  Director John Sayles’ provides a great personal introduction to the film.  Sayles’ introduction includes notes about the work of William Cameron Menzies, the film’s paranoid nature itself, the nightmarish visuals, the short production time, and much more.  One would do good by starting with this BEFORE watching the film, even if one has seen this film a hundred times.  Note that the entire introduction is included – including the intro to Sayles.

European Observatory Sequences (8:51) – these sequences are truly buffers adding additional run time at the request of the European distributor.  The additional is a fascinating look at a time before Movies were able to be seen in the same clarity and format as it was theatrically almost immediately.  There are title cards at the beginning of the featurette that gives context and what the additions were and the history behind why these were added and the glaring inconsistencies of the additional shoot.

European Ending (2:52) – the ending as one can imagine leaves out one of the biggest twists that the American version had.  Again, as with the Observatory alternate version, there are title cards at the beginning that give context and what the changes were.

“Invaders From Mars: A Nightmare of Restoration” by Scott MacQueen – is a 20-page essay on the restoration process and just how difficult it was.  This is a vital component along with the Before/After Restoration featurette that gives you a true understanding of how much went into bringing Invaders from Mars back to life.

Ignite Films’ 4K UHD version of Invaders from Mars is out now and can be purchased directly from their website right here!