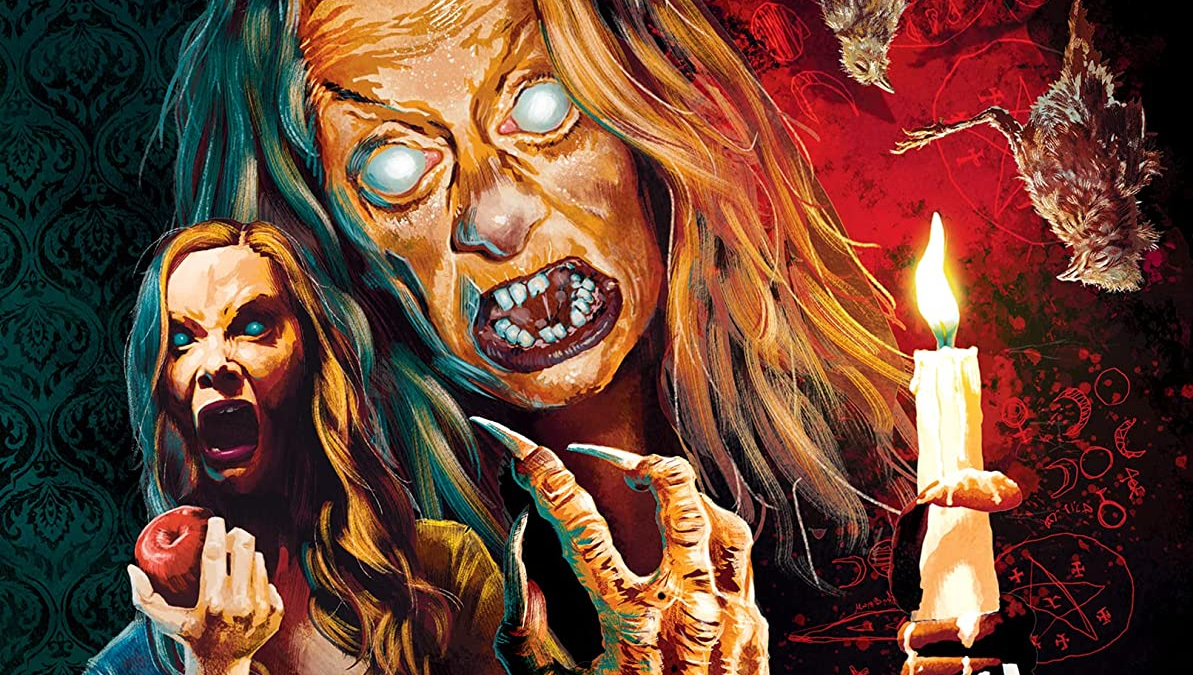 Not one but Two Witches haunt LA Residents in this ode to the technicolor masterpieces by Dario Argento and Lucio Fulci.  Arrow Video has released a beautiful Blu-Ray Edition of this festival favorite by all in one Filmmaker Pierre Tsigaridis.

Jump scares are easy.  Effective skin scrawling creepy is hard to do.  Two Witches – with its expert direction and solid performances – is able to be both scary and creepy in equal measure.

Two Witches manages that strange feat of making Los Angeles not actually look and feel like Los Angeles … by which it effectively becomes a very LA film.  Add into the mix that the film is not about actors, but normal work-a-day people only add to the milieu of accuracy.  Adding for good measure people who dabble in Wiccan, Witchcraft culture only refines this tale of Witches and their victims.

The film told in four chapters deals with a not-so-happy pregnant couple and the woman’s continue “visions” of an “old hag” following her.  The second half concerns two roommates and one’s obsession with the other’s boyfriend.  Together these two stories tell of a Grandmother (Marina Parodi) and her eventual possession of her Granddaughter (Rebekah Kennedy) – a pair of Witches without their understanding may have started something bigger than either imagined.

Filmmaker Pierre Tsigaridis working with Producer and Co-writer Maxime Rancon has created a story of unease and tension between what is real and what is conjured.  The screenplay is oblique and mystifying as much as it is terrifying with a sense of inevitable dread laid thick.  In their world once a Witch has you in their grasp no matter what you do or how you act eventually you will do that Witch’s bidding.  Tsigaridis and Rancon have concocted a story and script that never doesn’t take Witchcraft seriously, though many of the characters do – to their detriment.

Tsigaridis a quadruple threat understands that to truly pull off a great bit of transgressive nastiness you have to have every piece from shock scares, gore, tension, visual grace, score, and performance.  Because the director/writer/producer/editor/cinematographer has his hands in just about every bit of the film’s production there’s a feeling and sense of unity that isn’t always there on a debut feature.  In fact, one would not know Two Witches is a debut feature if not told.  There is a uniform understanding of this story that few directors have on a debut feature.

In fact, the only critique of Two Witches is the ending.  One wishes that this was not a “continuing” story but one that ended with a bit more of a satisfying period rather than a comma.  Regardless of that, Tsigaridis’s film is everything you want from a debut horror film; effective, creepy, transgressive, and scary.

The transfer done by Arrow Video is near flawless presentation of the film.  The digitally shot film has a very filmic look that harkens back to the Italian Giallo’s of Argento and Fulci. The handsomely sharp transfer’s main attraction is the black levels and color reproduction.  The film because of its style that is more Giallo has verbose colors that the Blu-Ray handles without issue.  The same goes for the black levels and contrast dynamics which feel subtle and nearly perfectly realized.  The only way the transfer could be improved upon is with an upgrade to a 4K UHD Dolby Vision encoding.

The all-new audio commentary by director, cinematographer, and editor Pierre Tsigaridis begins with his intentions of why he used the baby’s POV to achieve a specific tone he was trying to achieve.  Some of the details including how he wanted to approach shooting LA from a visual standpoint, the use of zoom lenses and how he achieved some of the various complex movements and also why he chose them stylistically, the various Los Angeles locations he used, how he constructed scenes visually to achieve certain moos he wanted, the construction of the Seance scene – how he culled from “true accounts” including dialog, the influence of David Lynch on the film, the influence of Giallo and Argento, the casting and work of Rebekah Kennedy, discussion of making a larger universe and more films in the world, the creation of the score and his playing the piano on the score, and much more.  Tsigaridis’s track is a truly wonderful exploration of his film craft and how he achieved it.  The conversation is both technical and thematic as he dissects each and every scene and manages to also have a larger conversation about his film and the universe he intends to create.

The all-new audio commentary by producer Maxime Rancon opens by admitting this is his first commentary track.  Some of the details include filming the film during the Pandemic, shooting the opening baby scene – and the fact the baby and witches were shot separately, the construction of the story – their use of the chapter format and inspiration taken from Quentin Tarantino, an interesting discussion about ADR and dubbing and how he as a child watched films in Europe dubbed in French, a great found moment during production – seeing a coyote in the wild and filming – that turned into a key moment for the film, the various jump scares and how they were achieved, how they achieved the transition from the first half of the story to the section half, the work between the various actors as it relates to the story, and much more.  Racon’s track is filled with information though he does have a tendency to allow a lot of silence do occur.  That small critique aside the track is a great compliment to Tsigaridis’s track.

Behind the Movie, Part 1 (4:27) – is an all-new featurette with director Pierre Tsigaridism writer/producer Maxime Rancon, and star Rebekah Kennedy.  The trio discusses the film and the way they approached the witches, the characters, the unique story structure – and the beginning of a larger story and more.

Behind the Movie, Part 2 (8:10) – is an all-new featurette – the second portion part of Behind the Movie – with director Pierre Tsigaridism and writer/producer Maxime Rancon.  In this second part, the duo discusses the building of the larger “universe” of the film, the use of various pieces of ephemera that visually represent witchcraft, the fact this is a prequel, the Makeup FX work, and more.

Dina Silva Interview (15:54) – is an all-new interview with actor and associate producer Silva.  The actor who plays Melissa – a helpful witch as described by her – begins with the research she did – she’s a skeptic – to give her context to playing someone who as she mentions is a staple in Los Angeles, the way that she and Tsigaridism picked up for art direction purposes, she even calls her mother to discuss her role in the film, a discussion of her nude scene and the makeup FX was achieved, and much more.

The Boogeywoman (7:47) – is an all-new interview with actor Marina Parodi who plays the Boogeywoman.  Some of the details include her excitement to play the part, the various entities and children’s stories that they culled from and inspired by – including the Wicked Witch of the West from Wizard of Oz, her inspiration from Goya – the practical eating of the Baby, and more.

The Original Score (10:44) – is an all-new interview with composer Gioacchino Marincola.  Some of the details include where he drew his inspiration from – The Conjuring, The Excrocist … a textural atonal score, examples of the instruments used and sampling those to create the soundscape as score in the film, and more.

The Piano Score (10:50) – is an all-director Pierre Tsigaridis talks about the inspiration behind the piano score for Two Witches.  Some of the details include how the inspiration and score adds “character” to the Witchcraft in these films – Don’t Look Now, and both Suspiria and the remake are discussed, the various classical pieces that he took inspiration from, Tsigaridis gives examples of the work on a 120-year-old piano – to great effect, and much more.

Test footage (1:33) – in this 90-second reel we see the various camera tests and test footage they created as a proof of concept.  Each clip ranges from 3 – 15 seconds.

Grimmfest 2021 Q&A with Pierre Tsigaridis and Maxime Rancon (30:15) – hosted by Simret Cheema-Innis the Q&A was a “live stream” event with the multi-hyphenate Director and co-writer/producer.  The Zoom Call begins with the duo discussing the real-life events that culminated in this film – including an account of an old woman looking at his mother at a restaurant, their want to create a film that was focused on the evil women, how the film was divided into two sections – both in style, technical equipment and approach were used, some of the various DIY tricks they used to achieve some of the gore effects, how they achieved the infamous “levitation scene”, and much more.

Image gallery (14:50) – this image gallery of 89 photos and poster art is accompanied by the film’s original score.

Behind the Scenes Image Gallery (2:20) – this image gallery consists of 14 behind the scenes photographs looking at the make-up FX work is accompanied by the film’s original score.