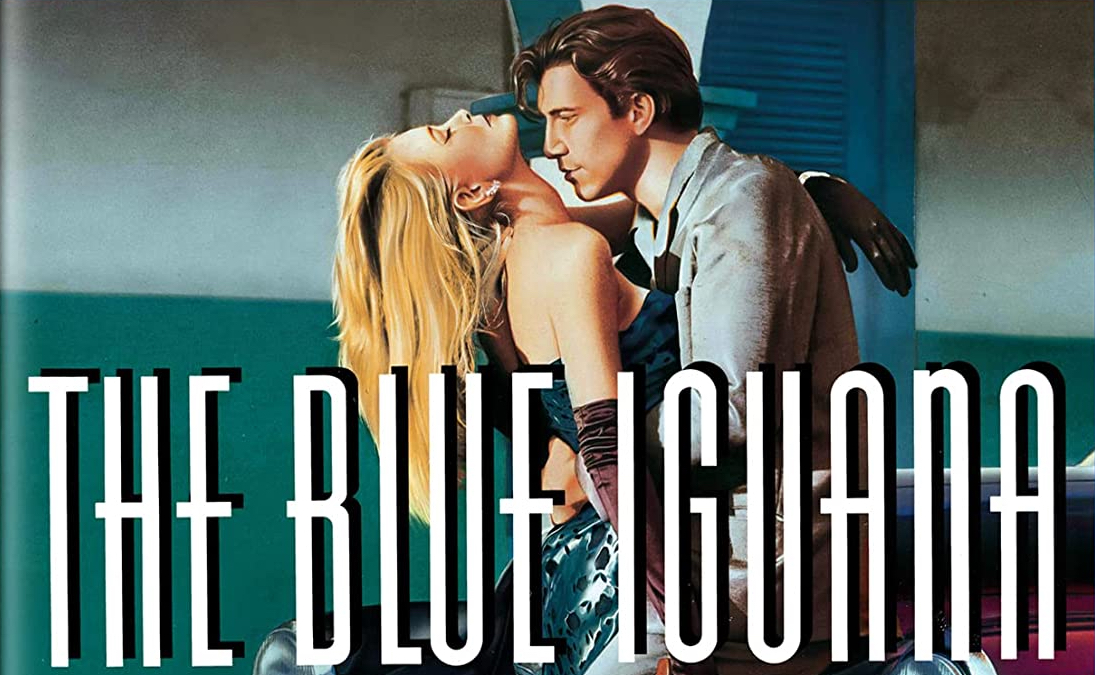 A Bounty Hunter takes a job in Mexico that he’ll soon regret.  The Blue Iguana makes its Blu-ray debut thanks to Kino Lorber.

Writer/Director John Lafia’s debut feature is the kind of retro throwback to the 1950s how most current filmmakers approach the 1980s.  The results are a Neo Noir comedy of errors (are there any other kind of Noir – a comedy or tragedy or errors) that’s aged like wine – not vinegar.

Vince Holloway (Dylan McDermott) is your average down-on-his-luck bounty hunter.  His bonds keep dying.  He’s about to be evicted.  He owes twenty large to the tax man in the form of violent collectors Strick and Quinn (Dean Stockwell & Tovah Feldshuh respectively).  But he may be able to get out of everything and start anew.  Strick and Quinn only ask he goes to Mexico where a Drug Lord (James Russon) and a corrupt Banker (Jessica Harper) are at war and there’s $20 Million up for grabs.  Holloway heads down to Mexico and gets more than he bargained for – is there any other type of deal in Noirs – with teenage gunrunners (Yano Anaya), psychotic henchmen (Flea), and Femme Fatale Bar Owners (Pamela Gidley).  What’s a Bounty Hunter with the worst luck in the world to do?

For a film that starts off with an opening theme song by Kurtis Blow, yes that Kurtis Blow, this is far more set in a 1950s mindset of Noir than a modernist take.  Lafia’s film is definitely influenced by some of the best of the ‘50s Noirs – think Touch of Evil or Johnny Guitar.  Survival of the trickiest.  Double crosses, triple crosses, and quadruple crosses abound.  The men think they’re smart but their dumb as ham hawks.  The women are crafty in playing 3D chess but not expecting bad luck and fate to intervene.

The cast is appropriately arched with their acting and approach to the Noir.  Led by Dylan McDermott who fits Holloway like a three-day-old suit.  There’s a shambling charm to the performance and the right tone to the voice-over he provides.  Even Flea matches tone and style even if as expected he’s cast for his wild animated energy.  Though the one exception is Yano Anaya’s stoner micro-dread-wearing gun runner that feels more modern than the rest of the cast but somehow McDermott and Anaya’s chemistry nullifies any issue.  The hardest part with any Noir that harkens back to the era is how the actors style their performances.  Here Lafia and casting director Jeff Gerrard find the perfect mix of knowing actors to be successful.

The Blue Iguana will delight fans of Neo-Noir or Noir in general with its wit, style, and arched cynical tone.

The transfer provided by Paramount Pictures is a beautiful example of what can be done with a 16mm shot film.  The image is healthy and verbose with a lovely patina of grain.  The transfer is handsome and sharp with well-balanced color reproduction and contrast levels.  There’s nary a scratch or blemish on the source used.  The Blue Iguana never looked this good even on during its theatrical run. Bravo again to Kino Lorber who continues to provide us with great image quality – which if we’re honest is the biggest concern with any hi-def release.

The Blue Iguana is a surprising piece of Neo-Noir.  Recommended!!!