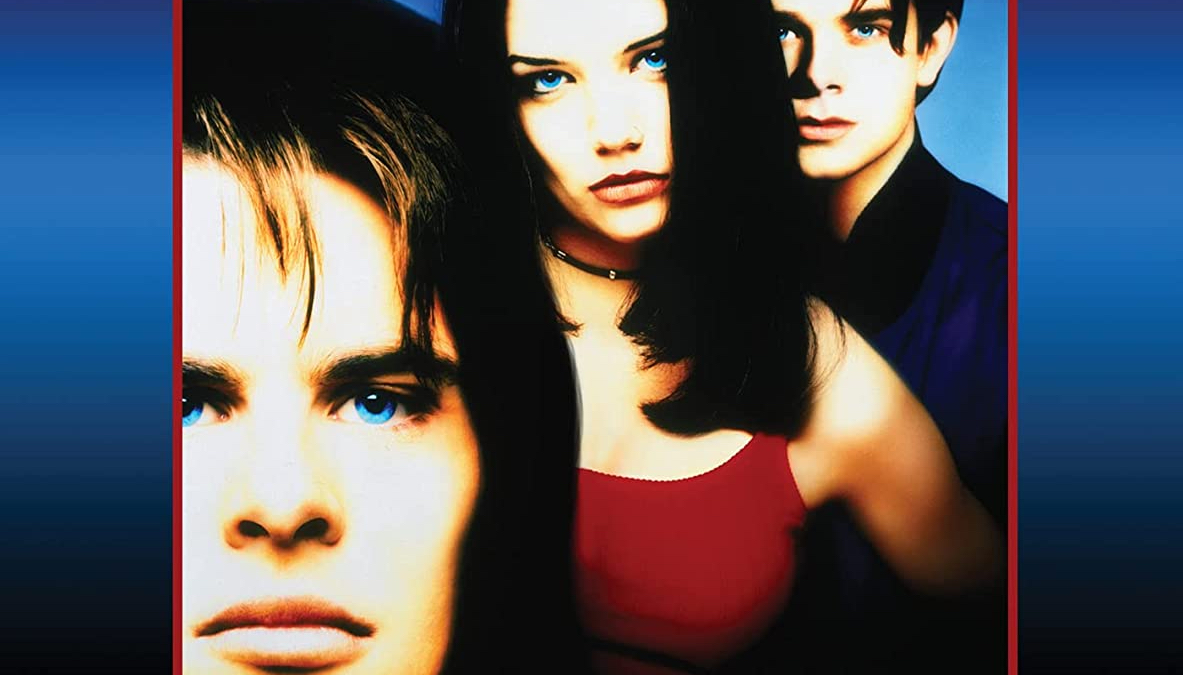 The kids aren’t alright as the song goes.  The late ‘90s cult favorite Disturbing Behavior gets a Blu-Ray release thanks to MVD and their Rewind Collection.

I worked as a projectionist in my early 20s.  It was at one of those Mega-plexes back when theaters were still running 35mm.  I ran Disturbing Behavior during my run.  The film opened in one of our biggest theaters but quickly moved to one of our smaller houses.  The film stayed in that single small house for three months with a steady line of people going to see it.  Most would go to see it to see … Katie Holmes.  They thought the star would be disrobing.  Many would go out dissatisfied.  Though you could tell there were a few that were surprised to find a clever little play on The Stepford Wives.

Though to call Disturbing Behavior sometimes crass like The Stepford Kids (which I saw many reviewers at the time do) is to do the film a disservice.  Though it treads on similar themes of that often-imitated Book/Movie it’s arresting enough to be different.

New kid Steve (James Marsden) is in the Pacific Northwest hamlet of Cradle Bay with his family to start anew after a tragedy strikes his family.  Steve quickly rejects the popular kids and ends up friends with Gavin (Nick Stahl).  Gavin is paranoid that they’re changing the kids in Cradle Bay into compliant drones.  Steve and friend Rachel (Holmes) wash it off as stoner paranoia but when Gavin changes himself… Steve and Rachel begin to unravel a not-so-mysterious science experiment run by Dr. Caldicott (Bruce Greenwood).

It’s been on record the troubles that director David Nutter had with the studio on the film.  Bad test screenings.  Multiple reshoots.  Multiple endings.  At the end of the day though, Disturbing Behavior works.  It’s not as terrible as one would think after hearing about “disastrous test screenings”.  It’s a fun little bit of sci-fi horror teenage melodrama.  It’s as funny as it’s fun and with overwrought performances by Greenwood in full-on Jack Kennedy prickish arrogance and Steve Railsback in fascist super Town Sheriff mode it’s an unexpected delight.

Though the scene stealer is William Sandler as groundskeepers Willie… sorry/not sorry for that one.  Sandler actually plays the janitor of Cradle Bay high school Dorian whom Gavin and Steve befriend.  Sandler goes HAM but HAM with a purpose.  What one could see as problematic turns into a clever play on expectations.

Disturbing Behavior isn’t an unforgettable piece of horror filmmaking.  But few films are.  What the film is though is a clever riff on teenage rebellion that in the end doesn’t make a ton of sense but it’s fun and funny through its sub-90-minute run time.

MGM has provided MVD with a beautiful transfer of the film.  The sharp image is complimented by the depth of the contrast and black levels.  The film was shot on location in Vancouver and mostly at night or darkly lit sets which can be troublesome.  Not here.  The transfer handles all of it with no artificing or distortion.

The archival audio commentary by director David Nutter begins with the old adage that you make the film three times; writing, filming, and editing.  Some of the details include why he pressed and got to move the production to Vancouver, the set and crew he had access to that he was familiar with because he worked on The X-Files and Millennium, the casting and working with Steve Railsback, how the budget being cut and how he approached solving those budgetary issues, the casting and working with James Marsden, the casting of Nick Stahl and how the character changed, the casting of Bruce Greenwood, the character of Caldicott and how he approached the role from a director’s perspective, how Katie Holmes was cast in the film, the work of casting director Lisa Beach, the reading/auditioning all four stars from Dawson’s Creek, the creation of what he calls “blue ribbon vision”, the work of production designer Nelson Coates, the various locations that they used and shot in, the work and post-production woes, and much more.  Nutter is as honest as he can be for a commentary track that was recorded back during the initial home video release.

Deleted Scenes and Alternative Ending with optional commentary by Director David Nutter – are grouped into 12 chapters that can be accessed individually or play all function.  Nutter’s commentary can be accessed from the same sub-menu.  The scenes break down below:

The commentary on the deleted scenes from Nutter is actually interesting in the fact that much of the deleted and extended scenes were the things he was forced to cut.  He makes no qualms about it but also is very proud of the work that he and his actors did.  His comments on the original much darker ending are some comments of the best of his track. A great 23-minute micro commentary.