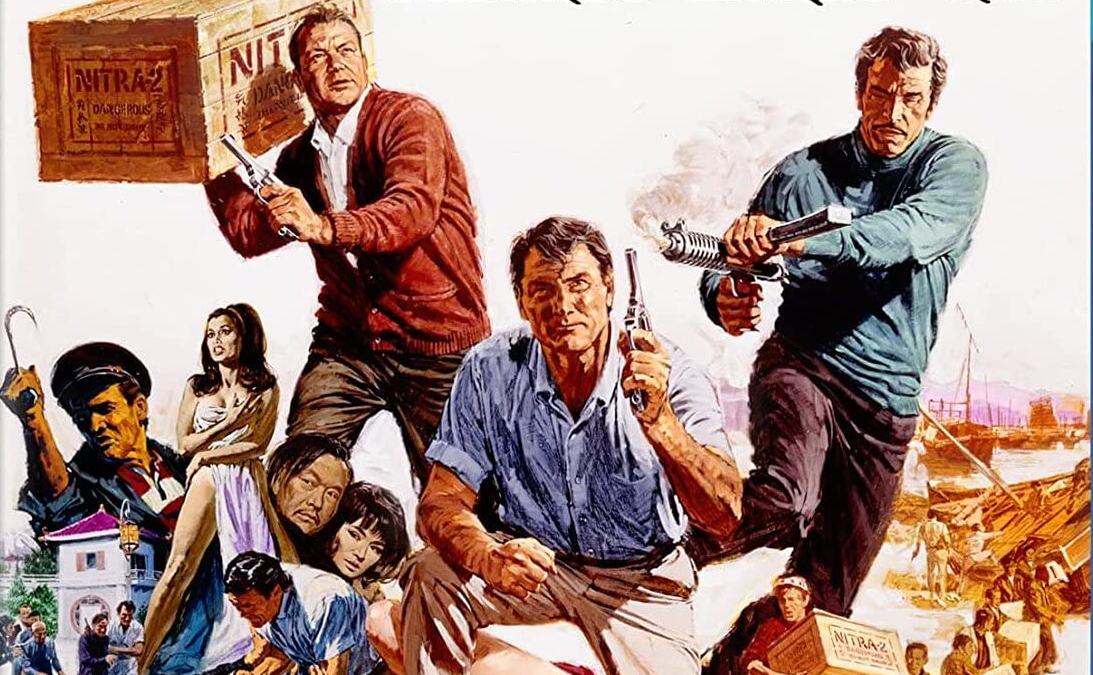 Man, the mid-to-late 1960s were a truly weird time in the Studio System.  Case in point; To Kill a Dragon.  This action programmer is Seven Samurai by way of Three Amigos.

Reluctant Mercenary Rick Masters (Jack Palance) is dragged into the plight of a small island village off the coast of Hong Kong.  The villagers have claimed “salvage rights” over explosives belonging to Nico Patari (Fernando Rey) and have no plans of giving it to him. Patari being reasonable asks them to return his cargo or he’ll kill them all.  Enter Rick Masters and a few of his friends.  Back and forth ensues with lots of explosions because … explosives!

This production has one huge piece that works in its favor.  The film was shot on location in Hong Kong, at least partially. The locations give the entire film a larger scale than normal productions at the time.  Director Michael D Moore (not the Roger and Me director) and cinematographer Emmanuel I Rojas understand visually how to maximize the locations for visuals.  They also understand – for the most part – how to construct and film an action scene.

The biggest problem with Kill a Dragon is that even though there are plot-dictated stakes, there are no dramatic ones.  Every piece of dramatic tension is deflated with lack of any urgency or consequences.  Each time the villagers or Masters encounter Patari, nothing happens.  Literally, Patari seems only slightly perturbed farther than the villainous murderous psychopath we want him to be.

It all really seems like an excuse to show how he-man, sweat-muscle, swinging-cad-about-town star Jack Palance is.  That statement is weird enough alone but to see this play out over 95-minutes is even stranger still… though highly entertaining.  Kill a Dragon may not have any sort of narrative consequence.  What it lacks in dramaturgy it more than makes up for in entertainment value.

The transfer provided by MGM may be older but by no means slouches.  In fact, this handsome and sharp image has beautifully balanced color and contrast levels leading to a finely detailed representation of the film on home video.  Especially striking is the outdoor on-location photography which is quite stunning.

The clean hi-def transfer is enough to recommend Kill a Dragon.  Those interested in strange genre forays of the 1960s will be equally intrigued.