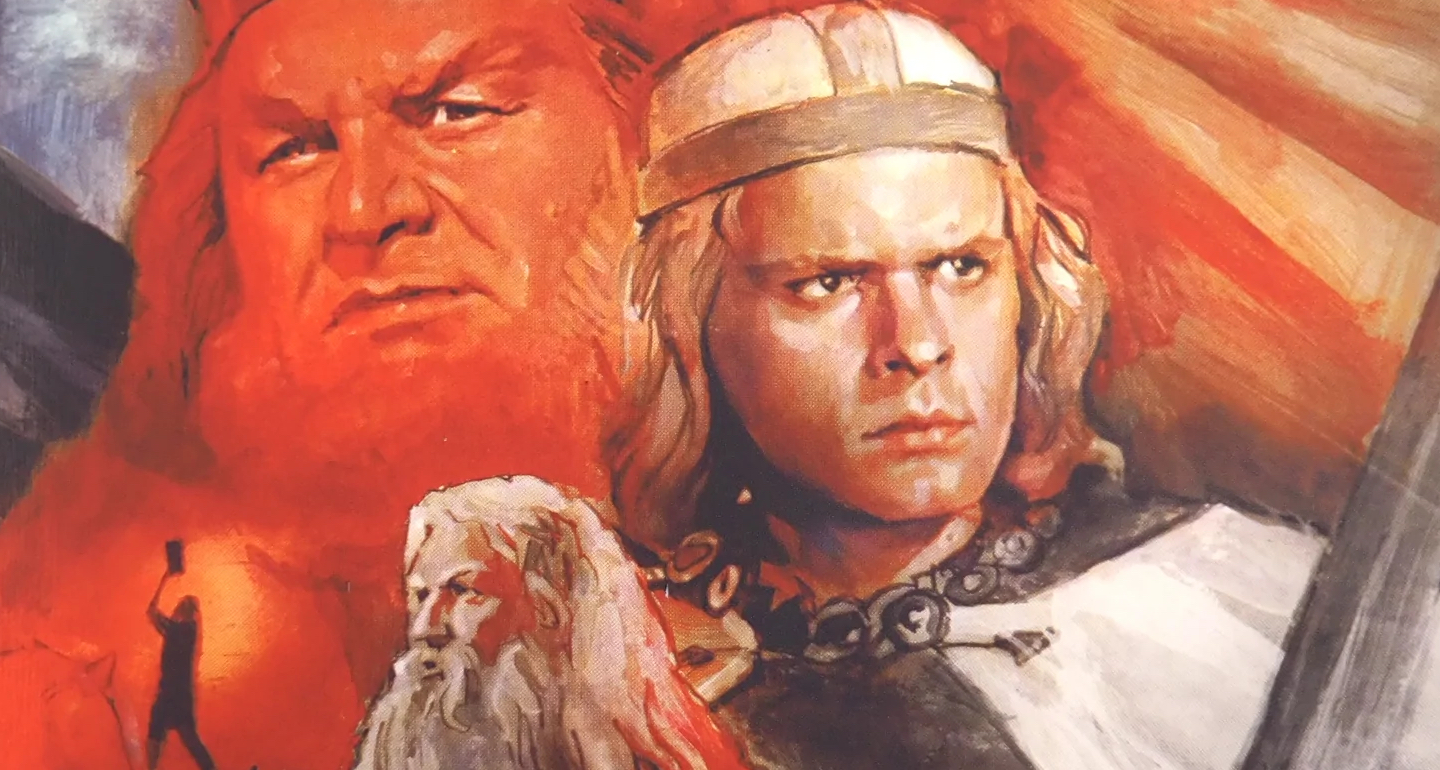 The fine folks at Deaf Crocodile have done it again bringing another cinematic jewel from Russian Director Aleksandr Ptushko.  This time it’s the visually hypnotic Sampo.

When Witch Louhi (Anna Orochko) kidnaps Annikki (Eve Kivi) the sister of Illmarinen (Ivan Voronov) it is to bargain with him to create a Sampo.  The Sampo is a magical windmill of sorts that can produce grain, salt, and even gold for whoever has it.  Illmarinen and Annikki’s paramour Lemminkäinen (Andris Ošiņš) attempt to rescue Annikki to no avail.  The only choice is to create the Sampo which sets off a battle of sorts between the wicked Louhi and Lemminkäinen that grows bigger and bigger until the unexpected “battle” between Louhi’s minions and the people of Kalevala.

Sampo is every part the superior film to Ilya Muromets.  It’s as beautiful and hypnotic but in the years between, Ptushko seems to have refined not only his style but the FX work here.  The widescreen composition here is jaw-droppingly good. The formalism of the compositions is even more elegant than in his prior work.  The work is even more stunning with the knowledge that Ptushko was filming two versions of the film (one in Finish and one in Russian) in two different formats (One was shot in Widescreen 2.35 and the Other was shot in Standard 1.33).

There is an artifice to the work that’s refined to the point of artful beauty with no regard for realism.  The film feels every bit the rival to the Technicolor work of Powell & Pressburger.  The use of primary colors like red, and green pop both visually and with meaning.  There is an elegance to the way that something like Louhi’s cape flies from the Northlands to Kalevala that never feels like anything but transcendently wonderful.

The entire film from the musical numbers to the feats of magic to the magical being of the mountain that helps save Lemminkäinen the final ending with the use of music to fight Louhi and her minions is wonderous.  At every step, Ptushko and cinematographer Gennadi Tsekavyj’s work is staggering big and breathtaking in their awe.

Sampo is a masterpiece of sound and vision.  There are few films that can compare with the spell that it will put you under.

The digital restoration done by KAVI – the Finish National Audiovisual Insitute – with additional efforts done by Deaf Crocodile themselves – is even more impressive than the one done for Ilya Muromets.  The widescreen cinematography is outright stunning.  The sharp handsome image is flawless in its reproduction of the 35mm cinemascope.  There isn’t a single scratch or image defect present.  KAVI has taken the time and detail to produce a stunning glowing transfer that translates to a reference quality Blu-Ray edition.

The all-new audio commentary track by cartoonist and film historian Stephen R. Bissette begins with his qualifications and gets right into this film.  Some of the details include the historical context of the Finnish folktale that this is based on, how the folklore from Finland has inspired many artists and continues even today, the differences between the US (called “The Day the Earth Froze” and the European versions, the two versions in Europe filmed in Finish (filmed in 1.33) and Russian (filmed in Widescreen), the fact the film was one of the first surround sound films ever produced (the 4-channel stereo has been restored and on this release!), the work and life of actors Andris Osins, Eve Kivi, Anna Orochko, the songs of the piece – and their omission in the US version, the work of screenwriters Viktor Vitkovich and Grigori Yagdfeld, the various characters in Finnish folklore that appear in the film, what is the Sampo of the title of the film, the difference between the Folktale and the filmed version, the context in which Roger Corman purchased this film for release in the US, the rise of Fairy Tales sub-genre around the world and specifically in the US, the distribution of Russian films during the time and the distributors, the effect that the Cold War had on Russian films and distribution, and much more.  Bissette’s track like the one he recorded for Ilya Muroments is a thoroughly and exhaustively researched commentary filled with great quotes from advertising, to Finish poems (translated to English), and other historical materials that give some great context and just entertainment (especially the Roger Corman produced EPK material that was just made up on the fly).

Interview with Michael J. Nelson of Mystery Science Theater 3000 (71:39) – this all-new interview is co-hosted by Deaf Crocodile co-founder Dennis Bartok and Comic Book artist Bob Fingerman is a Zoom-based chat (note that the video and audio quality is very good and not the usual fuzziness we’re used to in the teleconference app). Some of the details include Nelson’s history with film, how he joined the group that eventually became MST3K, how they chose The Day the Earth Froze (the US version of Sampo), a larger discussion of how they selected the movie for the show and how they fought with the executives as they developed the show, the way they wrote – he was head writer on the show – in the writer’s room, a discussion of the scripts they created for the show, how they produced the show, the various moments in MST3K of both Sword of the Dragon (the US version of Ilya Muromets) and The Day the Earth Froze, his transition from head writer to head writer and host during his time at MST3K, acting with Robot Puppets, and much more.  The interview is a great dive into the world of MST3K and their work on the US version of not only Sampo but Ilya Muromets.

Deaf Crocodile’s Blu-Ray edition of Sampo is out now