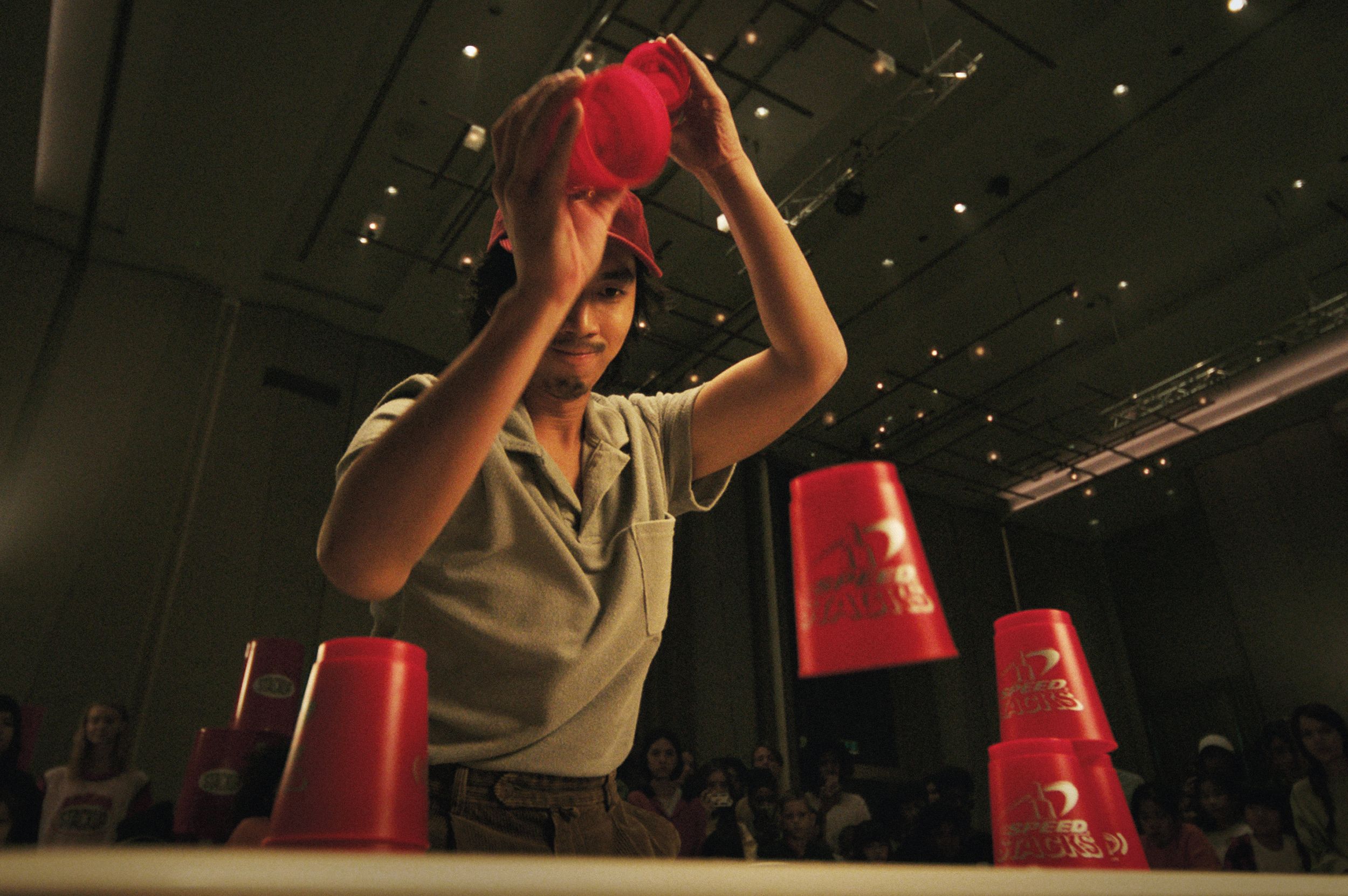 Writer/Director Nawapol Thamrongrattanarit’s Film is as much a coming-of-age film as it is a send-up of big-budget action films, romances, and sports films but done with a flair and sincerity that elevates beyond other films of similar ilk.

Kao (Nat Kitcharit) has done nothing but ready himself for his moment of greatness. That greatness you ask? Competitive Cup Stacking.  His long-suffering girlfriend Jay (Urassaya Sperbund) has done everything possible for him.  After more than a decade Jay has figured out that she’s better off without Kao and breaks off their loveless relationship.  This could not come at a worse time as Kao is preparing for the first-ever worldwide Cup Stacking competition.  Forced to deal with the impending responsibilities of adulthood, Kao will fail without Jay, or … will Kao come up with a plan to not only win at Cup Stacking but win back Jay’s affections.

Like any event summer blockbuster, Fast & Feel Love is overwrought in every way it could be.  From the visuals to the dialog to the score and editing.  Though this isn’t a criticism.  Far from it.  Rather it’s an acute and adroit understanding by writer/director Nawapol Thamrongrattanari of the story and film he is making.  This is the type of film where the opening titles don’t show up until 21-minutes in.  Though rather than being an empty stylistic void of noise, everything serves a purpose.

All of it gives us an understanding of the world that Kao lives in, deluded by too many movies and people taking care of him.  The film is sharp enough to critique this world Kao has created – who has been helped by Jay and his mother – and shows us just how difficult a path Kao will have.  It uses action troupes and kinetic editing to shed like on how simple things – like paying bills or washing dishes – are almost impossible tasks for Kao and as much of a challenge as the foes he faces in Cup-Stacking.

As the film begins to take shape and show Kao’s attempts to get out of the state of arrested development he is in, is where the film soars.  Something as simple as a Parasite parody becomes a meaningful part of the narrative with characters that are more than just part of a joke. That parody becomes one of the keys to Kao’s growth.  It’s this sort of layered approach to storytelling/visuals that Thamrongrattanari creates that makes the film seem so effortlessly entertaining and surprising at every turn.

Fast & Feel Love is the type of comedy we rarely get.  Visually astute, endlessly entertaining, constantly unpredictable, and emotionally resonant.  And one that can compete with any big budget blockbuster.