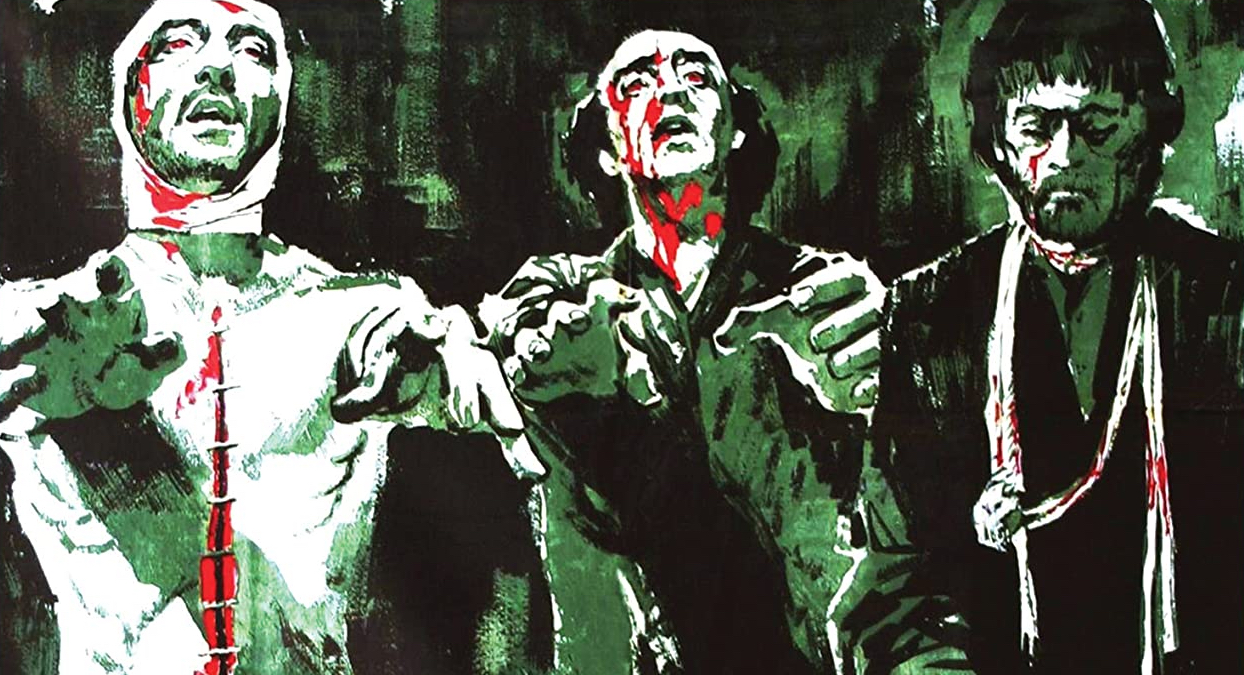 Jorge Grau’s The Living Dead at Manchester Morgue is more than just a riff on Romero’s Night of the Living Dead.  Synapse Films has given the film a new 4K restoration!

Sometimes a movie shocks you at just how good it is.  Jorge Grau’s seminal work The Living Dead at Manchester Morgue is one of those films.  From the opening moments to its final frame the film transfixes you with its tale of the dead rising from the grave.

Successful Art dealer George (Ray Lovelock) is on his way to finalizing a deal for an important piece that will set him up financially. Riding his motorcycle not a care in the world until his bike is hit by distracted Enda (Cristina Galbó).  Enda completely ruins George’s bike, which she assures him she will fix, but in the meantime, they strike a deal for Enda to drop George off at his destination.  Before any love bells can ring Enda and George arrive in the small town (at the time) of Manchester to visit Enda’s sister.  More than just sister await them as sinister fascist cops (played by screen legend Arthur Kennedy), electronic insect repellants, and of course, Zombies await them.

The shock of the film isn’t the gore (there’s plenty) or the higher budget (it’s wonderfully produced) but the sharp script by writers Juan Cobos, Sandro Continenza, Marcello Coscia, and Miguel Rubio.  The story’s full-on zombie attacks don’t happen until the third act but the film is so tightly constructed you will never mind.  As with the best Zombie films, they are never about the Zeds themselves.  Here with ecological concerns, police brutality, drug abuse, and more the film packs so more story and development for the better.

This isn’t your typical third-tier Euro Cult film as one can tell.  Grau working with cinematographer Francisco Sempere create a visual style that’s refined and accomplished.  The film never feels cheap or lacking in any way.  When the gore does begin the work is as good as anything in a Fulci film of the era.  It does help that the FX work was done by Fulci collaborator Giannetto De Rossi.

Make no mistake, The Living Dead at Manchester Morgue delivers the good and does so with intelligence and wit.

Note: The soundtrack – in all its forms – plays some pretty off-putting frequencies throughout.  So much so that I had to take a thirty-minute break because it was inducing a headache.

The Exclusive new 4K restoration from the original 35mm camera negative is outright gorgeous.  The 35mm shot lensed by Francisco Sempere is perfectly transferred to Blu-Ray with a beautiful patina of grain.  Not to be outdone by the grain structure the transfer’s sharpness and color reproduction give it looks like a freshly struct 35mm archival print.

The first Audio commentary featuring author and film scholar Troy Howarth begins with a very interesting opinion about European Zombie films and which was his favorite.  Some of the details include the shadow that Romero’s Night of the Living Dead cast over European genre cinema, the editor Vincenzo Tomassi and his illustrious career in Euro Cult cinema, the lead actors Cristina Galbó and Ray Lovelock as Edna and George, how director Jorge Grau got the financing of the film, the multiple titles that the film was released under in different territories, the themes of the film including environmentalism, the budget of the production, the filming locations in the UK, the work of actor José Lifante, the history of early zombie movies, a history or historical account of Spain’s political turmoil and how this created an exploitative entry way to the film industry, how Jess Franco opened the door for Spanish Directors getting into Genre filmmaking, the work of Arthur Kennedy and a discussion of the various Hollywood Actors with waning careers that went to Europe, the other work and an account of the life and times of director Jorge Grau and the lack of his films on home video in the US, a personal account of Arthur Kennedy and his work per-The Living Dead at Manchester Morgue, and much more.  Howarth gives us a solid informative track that’s a worthy companion piece to this film.

The second audio commentary featuring authors and film scholars Nathaniel Thompson and Bruce Holecheck begins with their love of the film and how the film’s had multiple titles and multiple opening sequences.  Some of the details include the work of director Jorge Grau in the film and his other films and how he got his start, the various production locations including some of the various iconic locations, the sound design of the film, the casting of the film and various actor’s work here and other films, the work of producer Edmondo Amati and his place in Italian genre cinema, the work of co-writer Sandro Continenza beyond this film, the screenplay and its intelligence in its themes and their delivery, the work of Arthur Kennedy, the swinging/hippie culture throughout film and how much it carried on for longer in Europe than it did in the US, the graveyard/church and its historical importance, the production’s troubles with that location and how it created between the crew and the local community, the trouble with make-up FX and actor’s issues with it, the zombies in this film and how they match up to others in filmdom, the supposed missing footage that has been historically known to be cut by censors, some fun and funny anecdotes from the set and the zombies, and much more.  Thompson and Holecheck deliver another winner.  Though both are in a relaxed conversation the amount of information about the production makes a perfect companion to Howarth’s track as there is not much overlap on information.

Jorge Grau – Catalonia’s Cult Film King (89 mins.) – This feature-length documentary explores the life and films of director Jorge Grau.  The doc is beautifully produced giving us more than just a talking head interview with Grau.  The documentary tracks Grau’s origins in the arts beyond cinema, how he got involved with “amateur” cinema in Barcelona, producing his first film, the lack of his films in circulation, the importance of The Living Dead at Manchester Morgue, and where it lines up of European Zombie films of the 1970s, and much more.  The doc really does a great job of giving us some context to how important Grau’s work is to European Cult Cinema.  The Living Dead at Manchester Morgue is the centerpiece of the doc, with good reason as you’ll have to watch the doc and movie to understand why.  There are plenty of behind-the-scenes photos, scenes from various films, poster art, and more.  Comments by Grau, academic Russ Hunter, FX artist Gianetto De Rossi, critic/author John Martin, critic/author Kim Newman, author/critic Rachael Nisbet, writer Calum Waddell, and others.  English and Spanish with English Subtitles.

The Scene of the Crime – Giannetto De Rossi in Discussion from Manchester (15:42) – the featurette/interview hosted by author/critic Eugenio Ercolani with make-up/special FX artist De Rossi was shot at the Fantastic Films Festival.  Ercolani discusses various topics like how he got the film, the production, the FX work and how it was achieved and much more.  Though De Rossi speaks English, there are subtitles during his portion of the interview.

Giannetto De Rossi – Q&A at the Festival of Fantastic Films, UK (42:29) – this Q&A – also hosted by Ercolani – is at post-screening of a documentary – doc’s title is not mentioned – about De Rossi that was recorded in 2019.  Some of the details include a great anecdote about Billy Wilder, how his effects work caused him to testify that the work was fake and not real, his collaboration with director Lucio Fulci, working with Arnold Schwarzenegger, working with Sylvester Stallone, and the differences between working with both and some anecdotes, working with the DeLaurentiis, transiting to American films, working with David Lynch (on Dune), and much more.

Original Theatrical Trailer (3:51) – the trailer looks to have been fully restored and looks gorgeous.

The Living Dead at Manchester Morgue is a great gem of the Zombie Genre.  Synapse has put together an amazing package.  Highest recommendations!!!