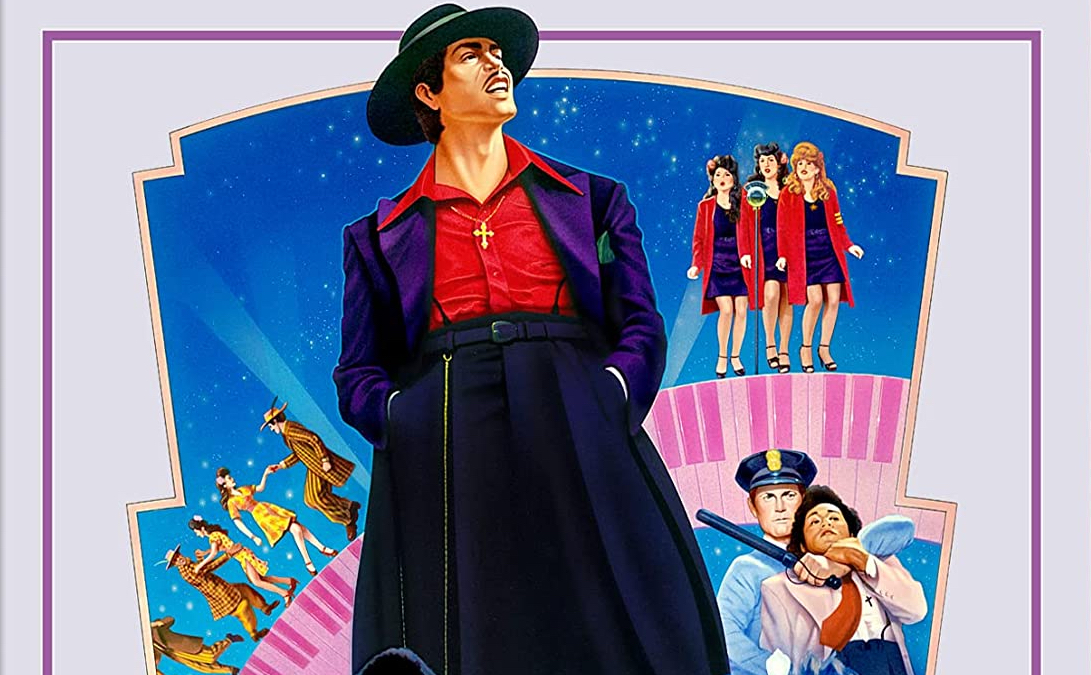 Luis Valdez’s Zoot Suit is as searing an indictment of systematic racism as it was when it was released in 1981.  Kino Lorber has given the Neo-Classic a new transfer and extras.

Let’s be honest… Lin Manuel Miranda saw and owes a lot to Luis Valdez and Zoot Suit.  Watching what Luis Valdez had done turning his powerful Musical hit into a similarly fashioned experience for movie theaters.  Zoot Suit feels like the blueprint used by Miranda who touted an\ “all-new experience” for what became Hamilton – The Movie (on Disney+).

El Pachuco (Edward James Olmos) is our guide of sorts for the journey we will take with Henry (Daniel Valdez) and his friends.  Like any other young man, Henry is recklessly enthusiastic about the life before him.  Though unlike someone like Danny from Grease or Jim from Rebel Without a Cause, Henry is Mexican and a Zoot Suiter/Pachuco.  This brings troubles in all its forms and doubly so with Law Enforcement (I mean those cops let Danny and Jim get away with literal murder so they have to find another target).  As Henry and his friends are indicted for the Sleepy Lagoon murders it is apparent to everyone except them they will do time.  Prison time is exactly what they do, even with the testimony exonerating them from the murder they’ve been accused of.  No matter to judge and jury who dole out their sentencing with barely a wave.  It is in prison that Henry comes face to face with the system that placed him there and the inner turmoil of his soul.

The Sleepy Lagoon Murders.  The Zoot Suit Uprising.  These are moments for the Latino population of Los Angeles that are things of nightmarish legend.  Latinos singled out by the media, police, and white Americans systematically abused in every way.  Zoot Suit shows these events and the treatment of Latino Youths.  Though not some sort of balancing the scales but a view of how Latinos were and still are currently abused by the system.

Not some polemic message movie, Zoot Suit is as thrilling and entertaining a movie musical as put on screen.  One that is as sharp and searing as the day it was released more than four decades ago.

Kino Lorber has gotten a beautiful transfer for this Blu-Ray release.  The handsome and sharp image’s colors pop off the screen.  The stage-bound film’s extreme use of lighting and gels is beautifully reproduced here.  Zoot Suit has never looked better on home video than it does here.

The all-new audio commentary by Filmmaker/Historian Daniel Kremer begins with discussing the vintage Universal Logo and being upfront that he “loves” this film and calls it one of the best musicals of the era (this reviewer considers this to be accurate).  He also considers this (and Cutter’s Way) the best film of 1981.  Some of the details include the unconventional manner in which they filmed the film, the choreography of Patricia Birch (who’s known for her theatrical and stage choreography of Grease), musicals at Universal at the time (there were a lot), the differences between the stage and movie adaptation, Olmos account of the development of what would eventually become Zoot Suit (it was initially called BABY ZOOTER), the stage play and how it went from LA to Broadway because of its success, Broadway opening, the structure of the musical and music, the personal and professional history of writer/director Luis Valdez, the historical figures and their parallels in the stage play, Henry Leyva who was at the center of the Sleepy Lagoon murders, various pieces of Latino culture that is imbued into the dialog and music of the stage play, a history of Zoot Suit culture, the personal and professional history of actor Edward James Olmos, and much more.  Kremer does a great job at giving us a detailed informational and entertaining commentary track.

Raconteur with Luis Valdez (15:47) – the all-new interview with the writer/director Luis Valdez begins with an explanation of the character Pachuco (Edward James Olmos) and his purpose in the story.  Some of the details include a definition of what a Zoot Suit was and the fad, what a “Pachuco” was, a historical account of the Sleepy Lagoon murders, the trail that ensued, the Zoot Suit uprising and Chavez Ravine, and the stripping of the Pachucos, the racial aftereffects in LA, how his theatrical work and working with Caesar Chavez, how he eventually developed the play, the massive success of the play, and eventually the movie Zoot Suit, and much more.  The 81-year-old Valdez is as sharp and adroit entertaining interviewee as directors half his age.

Zoot Suit is a truly great piece of cinema that deserves to be rediscovered.  Highest Possible Recommendations!!!