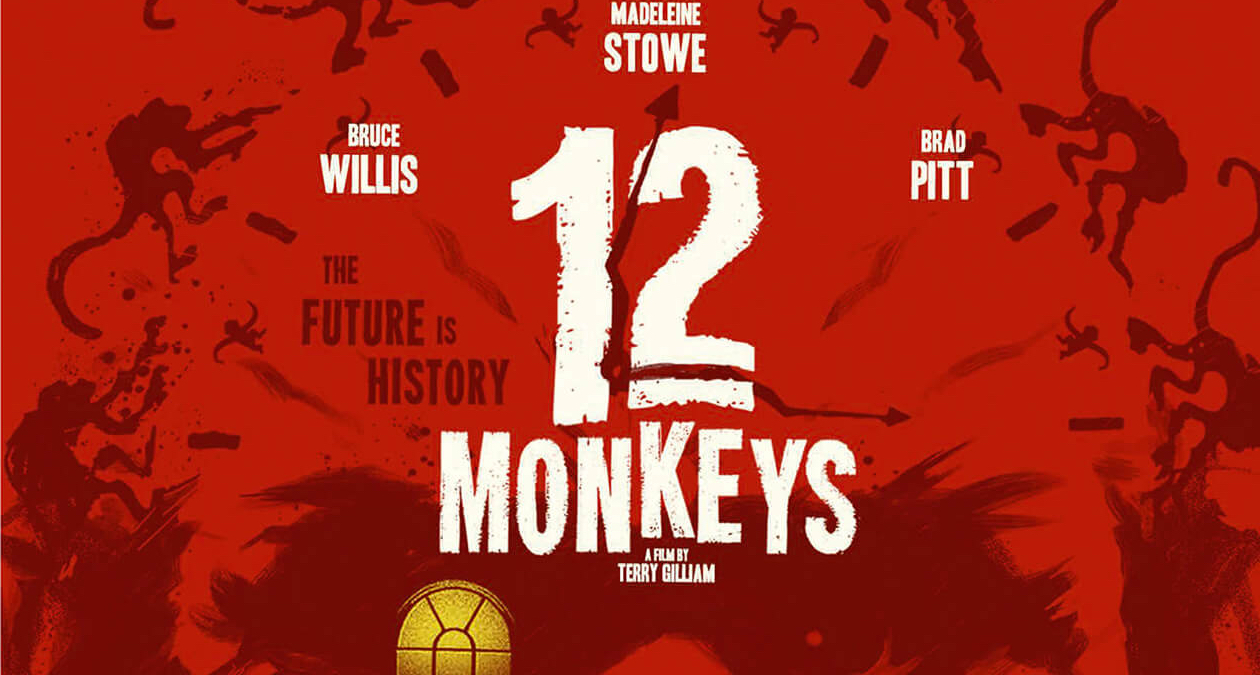 Terry Gilliam’s foray into Studio Filmmaking 12 Monkeys gets a new coat of spray paint – and new 4K Transfer approved by Gilliam – as it makes its 4K UHD debut along with Dolby Vision encoding, thanks to Arrow Video.

Note: this review was written before the announcement by Bruce Willis and his family that he was retiring from acting due to Aphasia Diagnosis.

12 Monkeys is a post-apocalyptic time travel movie that deals with madness and the elliptical nature of life.  Based on the Chris Marker short Le Jetée the film only takes the basic plot mechanisms with it.  Screenwriters David and Janet Peoples have created a dangerous and ultimately morose story that takes conventions of a sci-fi action thriller and purposely uses them for non-genre purposes.

When the Orwellian-style Government of 2035 sends James Cole (Bruce Willis) back in time to stop a plague that killed the world.  He is immediately placed, as he would in the real world, in a mental institution.  There he meets and befriends a true psychopath in Jeffrey Goines (Brad Pitt) and an empathetic Psychologist in Kathryn Railly (Madeline Stowe).  It’s in this institution where Cole’s real struggles emerge.  Trying to distinguish what is reality and what is physiological delusion folding onto itself.  Cole by going back in time becomes the harbinger of the end, possibly.

As Cole goes back and pulled back out of the past several times, he begins to question his reality and sanity.  Has he dreamed up the future?  Has he dreamed up the past?  Is this all really happening? Slowly each of those questions is answered with a finality that feels like a death march.  In the center of 12 Monkeys is a reoccurring dream that Cole has, a dream that sends him down a path of inevitability.  What makes the film so brilliant is the way that the film folds into itself in the most elegant of designs. As those final moments become crystalline to Cole and the audience hear Bernard Hermann’s fatalistic score from Vertigo.  A similarly themed fatalistic drama that deals with memory and reality in a similar way that 12 Monkeys does.

The fact that we have lived through a pandemic is not lost on this reviewer.  This viewing of 12 Monkeys (since the Pandemic) has strung this viewing with an even more chilling one.  One watching the final moments aboard a commercial airliner with a character releasing the virus is one that has added a sting to the already gut-punching moment because of the accuracy of how a virus travels… through ordinary non-symptomatic populations.

By its end at the point at which 12 Monkeys has revealed itself.  Terry Gilliam and the Peoples have done pulled off what one could consider the saddest and most elegant of cinematic magic tricks.  If one can get over the realistic sense of dread and helplessness that has been imbued into the film in a post-COVID world.  One will want to rewatch the entire film again from the new perspective they have given you.  That is the power of 12 Monkeys, in its ability to not only show you the beginning of humanity’s end but make an audience invest and care about its disparate characters.

The brand new restoration from a 4K scan of the original negative by Arrow Films and approved by director Terry Gilliam is nothing short of spectacular.  The film has always had trouble in every video format from VHS to Laserdisc to DVD and the earlier Blu-Ray edition.  The formats all had either too much DNR or too much grain to look distracting.  Here Arrow working with Gilliam has found the perfect balanced grain structure for the feature. The image is sharp with a great contrast level allowing for an image that reveals more image detail than any prior editions including the most recent Arrow Blu-Ray release from 2019.  The Dolby Vision encoded image is a dark lush nightmare dream come true.  With this UHD release, the film finally looks as it did when I saw it in the first week of January 1996. Much like their upcoming release for Robocop this home video iteration of 12 Monkeys is as beautiful and accurate presentation of this 35mm lensed film that has been produced.

The archival commentary featuring Gilliam and Producer Charles Roven like all Gilliam commentaries is a delight and one of the highlights of the disc.  Recorded in 1996 for the deluxe Laserdisc release the commentary has lost none of its informative and entertaining nature.  Most of the delight and entertainment comes from just how unfiltered, funny and keenly intelligent both Gilliam and Roven are during the commentary that’s brimming with entertaining anecdotes.

The Hamster Factory and Other Tales from 12 Monkeys This documentary by filmmakers Keith Fulton and Louis Pepe is a feature film in it of itself. In this reviewer’s estimation, The Hamster Factory is one of the top 3 documentaries about making film. In fact, Fulton and Pepe would go on in five years to write the best documentary about a failed movie in Lost in La Mancha. This film was commissioned by Terry Gilliam to document the filming of 12 Monkeys went wrong, it would show that he was not to blame. What we get is a fascinating look at a director at the peak of his powers and the challenges of making a film inside the studio system. The film is great because it details the minutia of a production and elements that are never shown during the entirety of the production. It features unguarded moments with some of the biggest stars in Bruce Willis, Brad Pitt, and Madeline Stowe. Especially of interest is the sections will be Pitt’s deep dive into his character Jeffery Goines, and a very honest look at the preview screening process.  Even now 26-years later it is still one of the best special features ever created.

The Film Exchange with Terry Gilliam is a 24-minute interview done during a BFI’s London Film festival with critic Jonathan Romey. The Q&A has Gilliam discussing his status in Hollywood at the time (which has never changed) as a true Visionary Renegade. Note that the film they are talking about and why Gilliam is there is not 12 Monkeys but The Hamster Factory which was shown. He also discusses how Bruce Willis was during the shoot (he’s known a notoriously difficult star). Gilliam is very jovial during the entire discussion.

The Archive looks at the various details, logos, documents, and design work that went into the production.

12 Monkeys is one of the best science fiction thrillers of the 1990s.  Arrow has done right by the film giving it an amazing transfer and special features.  HIGHEST POSSIBLE RECOMMENDATIONS!!!