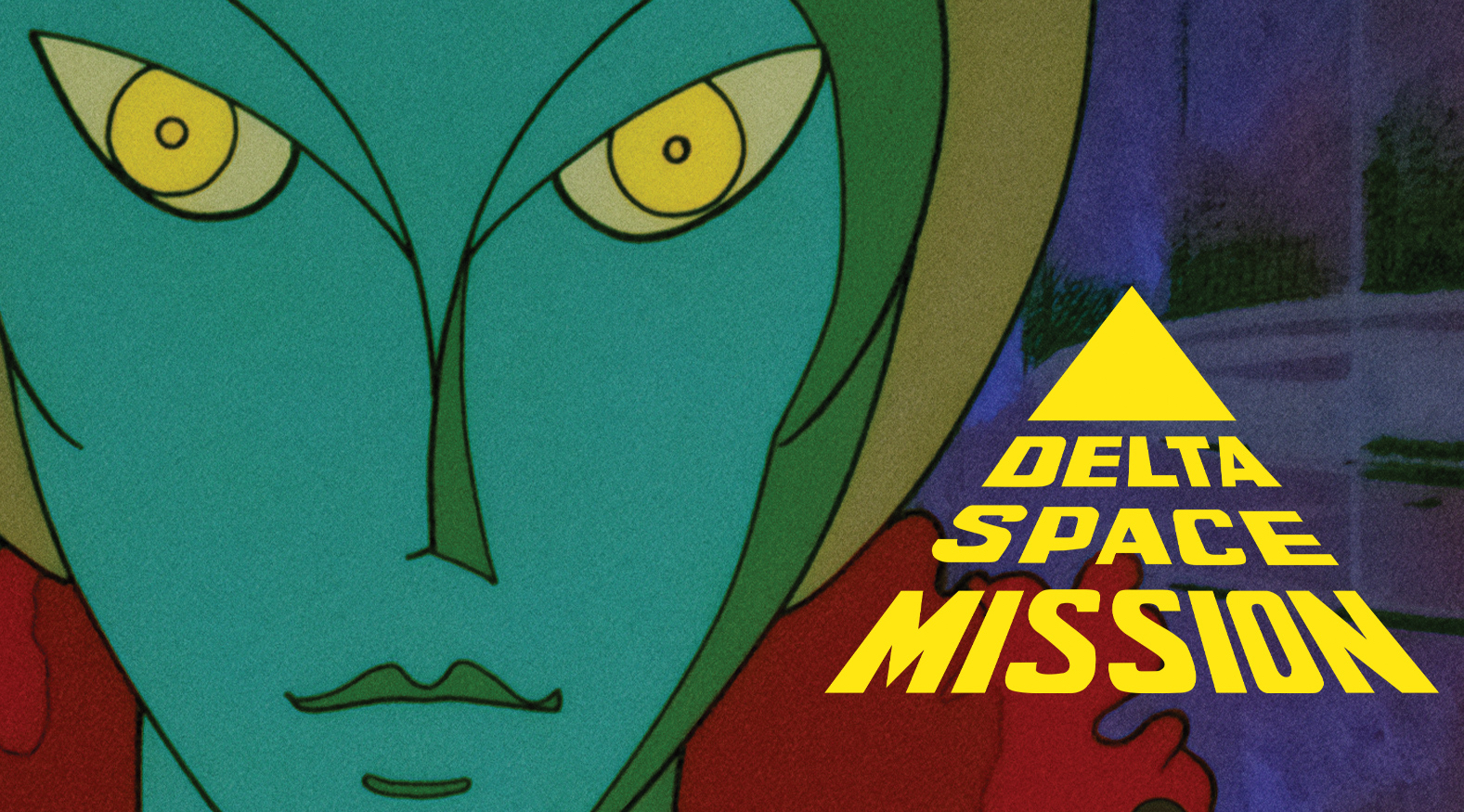 The Romanian sci-fi animated epic Delta Space Mission has never been released in the US until now.  Deaf Crocodile has armed it with a new 4K restoration and extras.

Delta Space Mission is the best kind of trippy heady Sci-Fi that was influenced by Kubrick’s 2001: A Space Odyessy.  A tale of obsession, robotics, AI, and teamwork.

The earth has created a new spaceship with the most advanced AI ever created.  To report on this massive breakthrough for earth is Alma, an intrepid adventurer/scientist/reporter.  The AI becomes self-aware as Alma admires the Diamond-esque structure of the AI.  The AI escapes and begins its obsession with Alma.  Alma being the good reporter she is cannot help but peruse this strange wondrous story.  Even if it means that the entire team that created the AI has to jump in to save her.

The above barely skims the surface of what is a wonderfully eccentric, fun, strange, and altogether fantastic piece of science fiction.  Steeped in fantasy and fairy tales as much as its pose and purpose are grounded in the Arthur C Clarke/Isaac Asimov critique of the advancement of technology.  There is a middle ground where Delta Space Missionresides that feels both adult and childlike.  It is a sweet spot that leads to some of the inventive speculative fiction.

Delta Space Mission assembled from multiple short films by directors Călin Cazan and Victor Antonescu.  The film could have been a messy mix of elements and tones never connecting.  The film is quite the opposite.  They have managed to adroitly put together the film to feel narratively and thematically cohesive.  Though not in the way that many would think.

Delta Space Mission feels like a teenage daydream of a forgotten Album or Book Cover.  One that mixes its love of those very specific influences along with Disney Animation and European folklore.  The concoction is a heady one.  One that by its end will have the most adventurous of views craving more.

The new 4K scan is nothing short of miraculous.  All one needs to do is go online to see samples of what Delta Space Mission looked like before the restoration and that’s all one needs.  The work here keeps within the boundaries of the original image and color grading (at least from appearances).  The sharp handsome image doesn’t have a whiff of the dreaded DNR, which gives us a beautifully accurate image that keeps the look without wiping it clean of any sort of film grain or affectations of film.  Bravo!!!

The all-new commentary by critic/author Kat Ellinger.  She begins her commentary with how obscure this film is and how it began as a TV series that was combined to create a film.  Some of the other details include the fractured narrative structure and the how’s and why’s this is, how post-USSR former Occupied countries how animation is much more adult similar to Japan and other areas including Romania, the oppression in Romania at the time and in the Eastern Block as a whole, a detailed account of how the film was produced by the company that eventually produced the shorts that Delta Space Mission was created, the other episodes from the series that the film was pieced together from, how Eastern Faire Tales, literature and more that influenced science fiction at the time but also in Delta Space Mission, a discussion of how different the Faire Tales are in Europe as opposed to the world large and Disney’s influence on that sanitizing the tales, Disney’s influence on this film, the “12 Steps of Animation” that was created by Disney, comparisons to the similarly themed Hayao Miyazaki Nassisaca that was released around the same time, a great parallel about Alma and Joe D’Amato’s Emmanuelle films, discussion of the Prometheus Myth and Frankenstein related to Delta Space Mission, the Romanian revolution that was occurring at the time of production and a detailed account and how it affected this film’s production, the soundtrack and how it changed from the initial score/soundtrack, and much more.  Ellinger’s commentary track is a wealth of deeply researched information about the production, Romanian films/history/politics, and just about everything pertaining to Delta Space Mission.  A must listen!!!

Interview with  Călin Cazan (41:34) -an all-new interview with DELTA SPACE MISSION co-director Călin Cazan. Interviewed by Deaf Crocodile co-founder Denis Bartok via Zoom Cazan makes sure to cover all the bases in this detailed long-form interview.  Some of the details include his personal history, his education in architecture, his eventual study in animation, how he was able to see so many Disney animated films in the Communist Eastern Bloc, how Delta Space Mission came to be feature-length, the various inspirations for the story of the film, the visual design of the characters, the design of space and other aspects of the animation, the process of animating the film, how their animation studio was able to move a bit more freely during Communist Era Romania than other studios, his immigration to the US and his work during the time, his return to Romania, his work in video games, and much more. Other than the quality of the Zoom video this is a great deep dive interview.  In English.