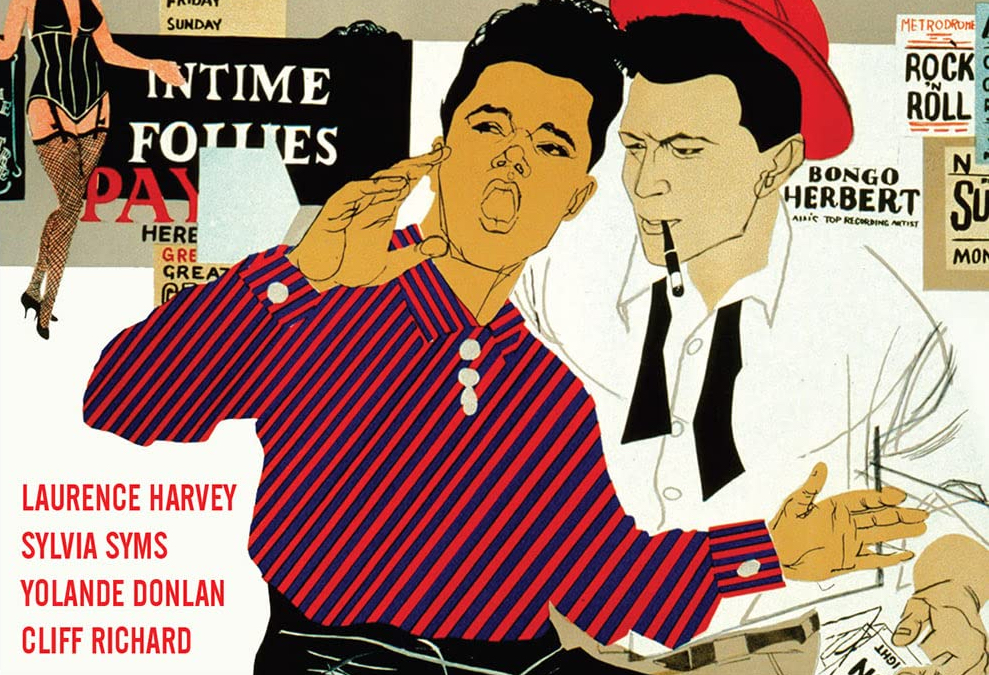 Expresso Bongo is the kind of film that shocks and delights cineastes.  A film as bitter pill as the free coffee in the cafes in Soho in the late 1950s is depicted.  Director Val Guest’s strong direction, a whip-smart adaptation by Wolf Mankowitz of the Julian More play gives us the musical companion piece to The Big Knife and The Sweet Smell of Success we never knew we wanted … but needed.

Johnny Jackson (Laurence Harvey) is the kind of fast-talking con man that’s fashioned himself into a “Talent Manager”.  He circles the cafés of London’s Soho district like a shark looking for blood (e.g. talent) in the water.  Jackson finds it in Bert (Cliff Richard) a young singer with a bit of a voice.  Renamed Bongo Herbert by Jackson the Singer and Manager begin their ascent the Show Business ladder with a mutual bit of manipulation and deceit.

There are moments, yes, that has become the standard of this sort of behind-the-scenes film.  Expresso Bongo luckily was done before these had become troupes had been ironed of all its eccentricities.  There is still a special kick one gets from those troupes/clichés in the movie. When they do appear they are done in the most unexpected of ways.

Everything is elevated even further because of Expresso Bongo’s gorgeous Black & White photography by John Wilcox.  The image and camerawork is artfully composed in a way that no modern film is.  The work by Wilcox and Guest with composing the frame for great emotional and artful effect.

Val Guest’s film is a slippery quick-witted shot of bitter vermouth that never stays cynical for too long to become overpoweringly oppressive.  With a pop-jazz soundtrack driving it every second, the film is breathlessly paced at 110-minutes.  Expresso Bongo has no problems with alternating between actual Musical flights of fancy that would make Vincent Minelli proud to Behind-the-Scenes Musical industry expose showing how the “sausage” is made.  A beautifully constructed piece of cynical entertainment that will have those adventurous enough to take the time converts to its brand of musical.

NOTE: This is the full and original 1959 theatrical version, which includes a number of songs that were cut out of the later and more commonly available 1962 version that was released at the time to capitalize on the popularity of Cliff Richard.

This 2K restoration from the original negative was done in collaboration with the British Film Institute and its Unlocking Film Heritage program.  The beautiful widescreen black and white photography by John Wilcox is perfectly rendered in High Definition.  The restoration done in collaboration with BFI is astounding.  There is nary a scratch or blemish on the image.  The contrast levels for this handsome sharp image are close to perfect.  Those that have a particular fondness for Widescreen Black & White films will want to pick up this film just for the image alone.