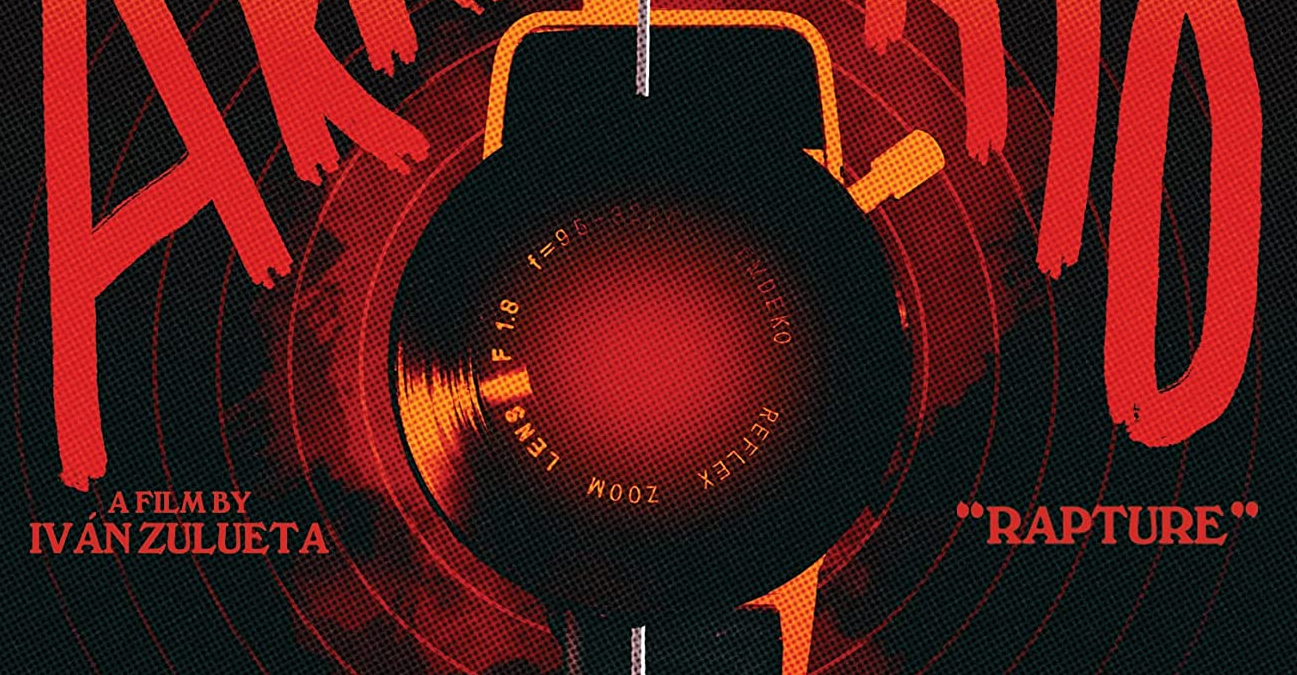 Director Iván Zulueta’s Arrebato is a masterwork of Art Horror.  Altered Innocence has done a marvelous job with their 4K Restoration with great special features.

Let us be clear.  Arrebato is truly a work of genius.  I have watched it multiple times since receiving my review copy.  Though Arrebato will frustrate many viewers, the film is both easily described and indescribable, obtuse, and clear. Like any good piece of art … challenge.

Writer/Director Iván Zulueta rather than creating a horror film of shocks and set pieces have created something more akin to Eraserhead.  A film that slowly but assuredly drowns you in the dense slippery black visagothic primordial ooze of a dense visual and auditory language that unsettles as much as it confounds.  Where the Lynch film was his response to the anxieties of fatherhood, Zulueta’s film is about sexuality, the spirit of art, the hold that drugs and obsessions hold onto us until we evaporate.

Arrebato never truly allows things to never truly settle into a conventional storytelling rhythm.  Shifting time without indication or the literal shift from reality into other states of being or shifting of filmmaking style.  All contribute to Zulueta’s film unbalancing an audience member forcing us to confront the darkness of art and addiction.  How the obsessive nature of both can easily send one to ruin.

Each of the characters José (Eusebio Poncela), Ana (Cecilia Roth), and Pedro (Will More) are all facets of Zulueta.  José the filmmaker struggling to make more.  Ana the lover and willing collaborator abused by the filmmaker.  Pedro is a true artist and addict whose prelections are not immediately present.

Zulueta’s film never truly allows them to be characters but rather pawns in a game that ends as nihilistically as any horror film can.  As Pedro begins to send films to José, everything begins to unravel at the cost of Ana.  There’s a cruelty present that feels real and isn’t for some sort of gratification.  There is a grime and ugliness to what Pedro and José become.  A slithering wilting piece of obsession.

That does not exclude Ana.  José drags her into the primordial because she loves him.  This relationship culminates with Betty Boop moment between Ana and José is some of the most harrowing and haunting scenes put to celluloid.  It isn’t violence against Ana that is so shocking. Rather how it stems because of the love and emotion behind Ana’s intentions.

Though by its very fitting end José cares nothing of the destruction and abuse his addictions have cost him.  The only thought is finding what Pedro had found with his final film.  That complete sublimation into art.  Complete and utter Arrebato.

Arrebato in Spanish means Rapture.  The definition of Rapture is either intense pleasure or the biblical end of days.  In Zulueta’s Arrebato they are one and the same.

The Brand New 4K Restoration is a beautiful minor miracle.  Having compared the other home video versions of Arrebato, this transfer is night and day.  The transfers prior to this restoration were faded, scratch-filled, murky nightmares.  Altered Innocence 4K restoration brings the image back to life.  The crisp sharp transfer is an upgrade in every aspect.  The image is brighter, vibrant color reproduction, and a beautiful grain structure giving the Blu-Ray a more Filmic look.

The newly recorded audio commentary track by Mike White discusses this cult classic.  Some of the details include discussion of Iván Zulueta personal history, the presence of Disney (and their characters) that are present and how they tie to the film beyond just visually, how Spain’s political and cultural atmosphere begat the film, Pedro Almodóvar work in the film, the drug use that was depicted in the film and also the real drug use of its cast and crew, the actors who eventually worked with Almodóvar, Zulueta’s personal/professional life, his first film he directed Un, dos, tres… al escondite inglés, the trading card books that featured prominently in the film, a making of Arrebato called Arrebatosreleased in 1998, other documentaries discussing the work Zulueta including the one that’s included on this disc from Duque, 8mm processing as a reality and onscreen, the cameo appearance of Almodóvar, the release of the film and Zulueta’s career post-release, how the release was very limited even in its native Spain, reviews at the time and recently and their anger at the dream logic of the piece, and much more.  White’s commentary is a relaxed affair that alternates from informational from the production (which info that’s available) and the critical account of the film.

Ivan Z (52:28) – is a short documentary subject directed by Andrés Duque focusing on the life and times of Arrebato’s director Iván Zulueta. The film allows Zulueta to warm up to discuss his art, film, and life in general by taking a tour of his home.  The art (he’s painted countless new posters for classic Hollywood films, some glimpsed even were criterion Collection covers) is the entry point as he begins to discuss his love of films and eventually making his way to the things he’s directed and the reasons why his career was so limited in film.  It’s a truly great piece of non-fiction that allows its subject to speak to their work and life even going into the darker demons that Zulueta has faced in his life.  The doc features some great footage from earlier work from Zulueta.  Spanish with English Subtitles.

US Theatrical Trailer (1:41) – The trailer has been fully restored like the film.

Arrebato is a challenging work of art designed to confound and elate.  Altered Innocence has given new life to the film with an amazing transfer and thoughtful extras. HIGHEST POSSIBLE RECOMMENDATIONS!!!