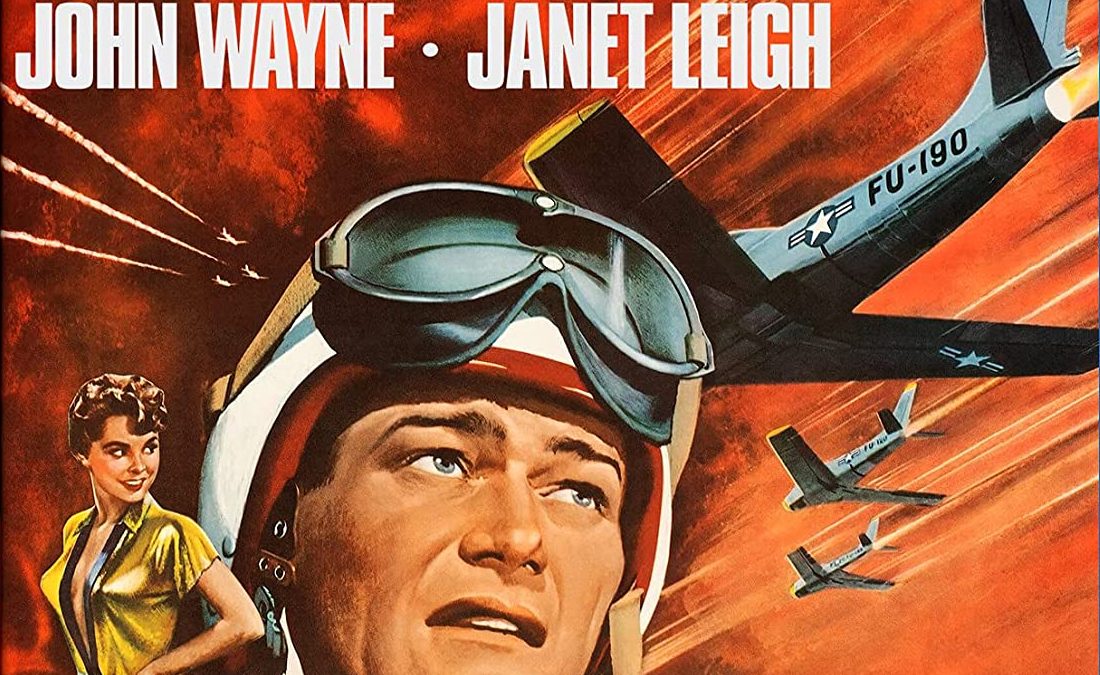 The Cold War gets hot with Wayne and Leigh in Jet Pilot the Technicolor Action Romantic by Joseph Von Sternberg and Howard Hughes.  New to Blu-Ray from Kino Lorber.

This is more Romantic Comedy than a highly accurate depiction of the Cold War-era espionage.  Though its faults with accuracy belie a rather charming piece of pop filmmaking by legendary director Joseph Von Sternberg.

A Russian Pilot Lieutenant Anna Marladovna (Janet Leigh) lands on US Soil (re Army Base) everyone is surprised include Air Force Colonel Jim Shannon (John Wayne).  She not only asks for asylum but charms Shannon into a tizzy.  This being the cold war Marladovna’s motives may not be as Andy Griffith as they appear.  The romance between Shannon and Marladovna is as whirlwind as the globe-trotting.  Double crosses.  Triple crosses.  A stripping nude Russian agent (happens more than once, surprisingly).  Steaks and rare roast beef.  Jet Fighter aerilbatics as foreplay.  Micro dosing LSD.

Jet Pilot is the kind of film that has Janet Leigh playing a Russian without speaking Russian or a Russian Accent.  Furthermore none of the actors that play Russian speak it or in an “accent”.  It’s also the kind of film has Janet Leigh disrobe and the sound fx of jets whistling by occur.  That is not to say the film is bad just … not your average film on the topic.  Which is to say both humorous and refreshing.

The fun is in the twisty script by Jules Furthman that keeps the propaganda to a minimum but also plays up specific plot points that one wouldn’t think of.  The script manages to be adroit at keeping you guessing as to where it will go next. Though the ending is something no one will be surprised by.  Though its focus is on the relationship between Shannon and Marladovna as pilots, combatants, and ultimately a couple.  The way that this relationship is earned through knowledge, skill, and trust is easily one of the best concoctions of the script.

Wayne and Leigh, though the age difference is HUGE, generate chemistry that’s tested and utterly perfect.  There’s a slow burn way that Wayne’s bemusement and eventually well-earned respect mirrors Leigh’s defensiveness to eventual warmth and understanding.  The script’s framework does some of the work and gives both actors great dialog and moments to play off one another.  It is the actor’s interplay and acting that brings this one over the top in the best way a romance can.

The vibrant Technicolor photography, the amazing aerial maneuvers shot up close and personal, and all of the other witty technical achievements would have been all for naught if Jet Pilot didn’t work as a romance first.  Thankfully, it does that with flying colors.  Yes, pun intended.

Kino has wisely chosen to include both the 1.85:1 Widescreen and 1.37 Versions of the Film.  Having watched both the obvious choice is the 1.37 Academy standard version of the film.  It’s what was theatrically shown and gives us the full frame as Sternberg had shot the film.  The image on that is beautifully glossy with a nice patina of film grain.  The Technicolor image does indeed pop when cinematographer Winton C Hoch’s image focuses on a streak of color, like Janet Leigh’s red lipstick.  The 1.85 Widescreen images may be more “comforting” to viewers that are used to the image filling up their screen.  The image still retains the luster of the 1.37 image.  Though because it’s reframed and essentially enlarged the image itself loses a bit of the definition of the image.  Though only a discerning viewer would notice.  Thankfully, no one has to choose as they have the option for both.

Jet Pilot is a keen romance that will surprise audiences.  Recommended.