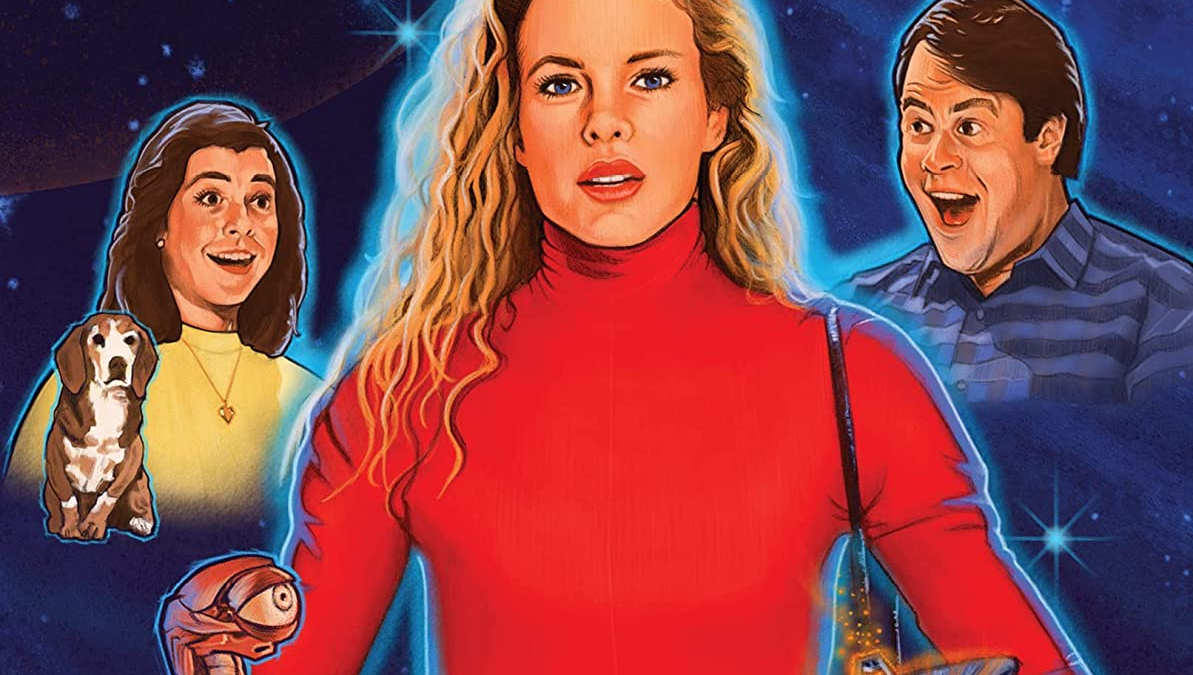 The Richard Benjamin directed cult classic family film My Stepmother is an Alien makes its way to Blu-ray with a new transfer and special features thanks to Arrow Video.

So… the 1980s were strange.  Having lived through them I can attest.  One of the signifiers is that My Stepmother is an Alien was a heavy-in-rotation VHS in my household circa 1989 when it was released.  The combination of Kim Basinger and Dan Aykroyd was too much to pass up.  Aykroyd because Dragnet was also a household favorite heavy-in-rotation.  Basinger because well for the two-one combination of 9 ½ Weeks and Batman.  Batman was in rotation with the family… 9 ½ Weeks was a part of my own personal collection.

The divide in those two films; 9 ½ Weeks and Batman, is where the PG-13 My Stepmother is an Alien lands.  It’s weirdly sexual because you know Basinger was the model of that paradigm in 80s Hollywood.  It’s crassly commercial wanting to be a blockbuster ala Batman.  It falls into the middle ground of wholesome and strangely inappropriate like the seduction and sex scene IN A FAMILY MOVIE!!  Then you have something as specific as referencing Jimmy Durante which even at the time was … strange.  Almost, as strange as referencing Dan Aykroyd right now in a film.

There has rarely been a stranger romantic duo on-screen than Aykroyd and Basinger.  One would think that it’s a disaster in the making.  It’s not.  It works like gangbusters.  Aykroyd’s generosity as a comedic performer helps Basinger with landing her comedic moments.  Basinger’s acting and genuine chemistry with Aykroyd give the boost to him as, dare I say it, a romantic lead against Basinger.  Together it makes sense during the runtime of the film as much as it does when you’re not watching the film.

Though directed by Richard Benjamin My Stepmother is an Alien feels like if Paul Bartel decided that he wanted to make a family film.  Benjamin was always a very commercial filmmaker that directed very straight-ahead films.  My Stepmother is an Alien feels like the strange outlier in his filmography.  It’s that incongruent sum of its parts and strangely out-of-place elements that give it an awkward, but highly enjoyable rhythm.  Though at its end the film is still a wholesome rom-com meets sci-fi family film mash-up.

The Brand new 2K restoration from the original camera negative is nothing short of fantastic.  Often with films like this, the upgraded and restored image is at the expense of the VFX work done but not here.  The work done by, amazingly, John Dykstra is actually enhanced by the clean and crisp image.  Arrow Video has really gone above and beyond with this title.

The newly recorded commentary by critic Bryan Reesman is the kind of rapid-fire deeply researched commentary that you’ve come to expect from Reesman.  Some of the details include the 50s Sci-Fi remakes and genre style homages in the 1980s, Tom Jones’ cover of Prince’s Kiss, the state of Visual FX work when this production started, how the Klystron is an actual machine, the work of Alyson Hannigan, the small visual homages to other Sci-Fi films, the work of VFX supervisor John Dykstra, what Siskel and Ebert thought of the film, the locations used by the production, the casting of the film, the work of Richard Benjamin both his directing and acting career, the work and career of Kim Basinger, the film’s release and box office, the script development and the writers that were involved, various casting possibilities for the Basinger role and Aykroyd, the production of the film and the budget, the work and career of cinematographer Richard Kline, Aykroyd’s thoughts on the movie, the house that was used not only this film but also in the original Candyman, Basinger’s thought on the film and her own performance, Aykroyd’s belief and research on extraterrestrial and ghosts, a side anecdote of Paul Rudd and his appearance on Conan O’Brien’s show, the use of Jimmy Durante and older comics status at the time, the significance of Princess Stephanie, the idea for the sequel they had in the early 90s, and much more.  Reesman also includes some great quotes from interviews from his research.

Cosmetic Encounters: Directing My Stepmother is An Alien (14:08) – an all-new interview with director Richard Benjamin begins with how oddly he got the script for the film.  Some of the details include Aykroyd had already been cast, was initially written as a horror film, the crazy ideas that they came up with for her first appearance and how she would show up, a funny story about the use of the Prince cover, the Christmas time release, and more.  As Benjamin doesn’t appear this is more like a micro commentary.

Image gallery – 12 production stills that can be navigated with your Remote’s Next and Back Chapter Stop Buttons.

My Stepmother is an Alien could have only existed in the 1980s.  Arrow Video has done a marvelous job in its restoration of this cult classic.  Recommended!!!!