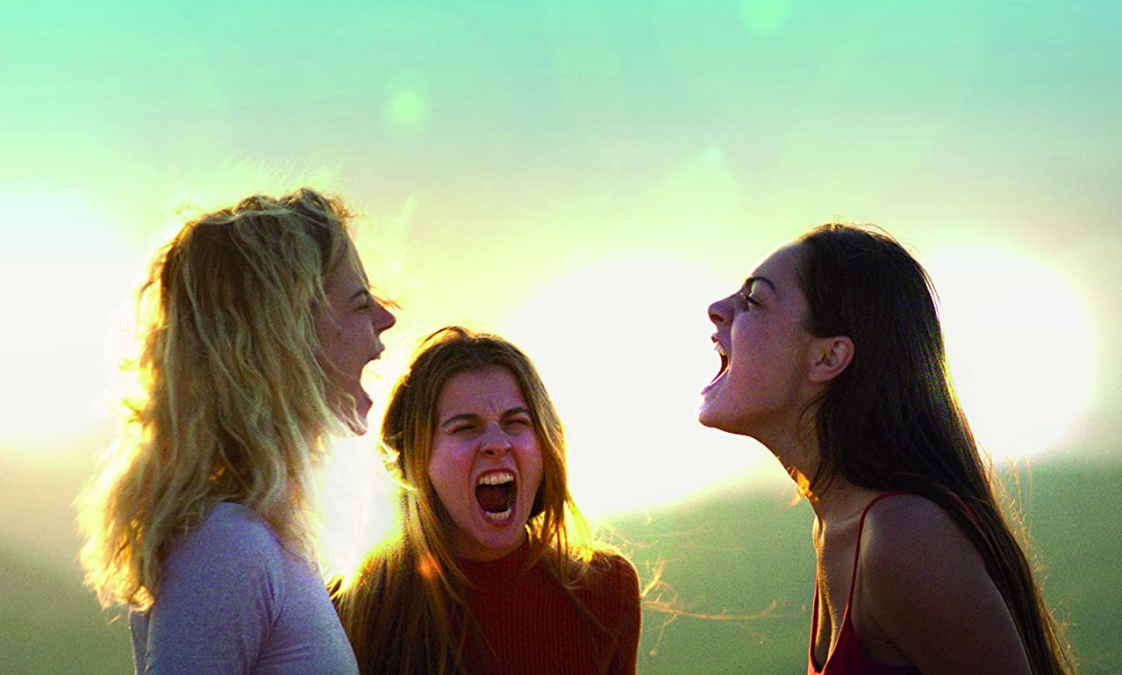 Three young women see their chance of independence slip from their grasp and decide to take matters into their own hands. There are, naturally, consequences. The Hill Where Lionesses Roar is an enticing directorial debut from 20-year-old French/Kosovar actor Luàna Bajrami.

I wasn’t sure that I had ever seen a film set in, or produced by, Kosovo and a quick visit to Letterboxd confirmed this for me. The Balkan country borders Serbia and Albania, and its independence is still disputed.

The fall-out from war in this area of Europe a mere 20 years ago is still very obvious in The Hill Where Lionesses Roar. There appear to be few older men around; buildings and roads remain in a state of disrepair; money, jobs, and prospects are limited.

The film focusses on three young women, friends who spend their time lounging in almost suspended animation on the mountainside near their home village. They are marking time until they can find out whether they have been accepted to university at the end of the summer – the route out of their troubled lives.

But as they realise that they may have to take things into their own hands to obtain their freedom, the lionesses Qe (Flaka Latifi), Jeta (Urate Shabani) and Li (Era Balaj) begin to roar and excitement temporarily enters their lives.

The film is written and directed by 20-year old French/Kosovar actor Luàna Bajrami, who is probably most memorable in the role of the maid Sophie in Portrait of a Lady on Fire. In this, her directorial debut, she also plays a small role – a young woman whose family emigrated to France and who has returned to visit her grandmother. The contrasts between the lives of those who stayed and those who left are touched on briefly, with each thinking the other has the better end of the deal.

As a debut feature, The Hill Where Lionesses Roar is full of many good things and much promise. Bajrami is clearly dealing with things she has experience of and works with the three main actors to convey a feeling of ennui, then injustice, and finally action. The early scenes where the young women are lounging in the grass or under a tree on the hillside are beautiful, and the stillness conveys the patience of waiting for something which is about to happen.

The first half is stronger than the second half though, when the narrative and visuals fall victim to a few clichés too many and, much like its three protagonists do, it loses its way before reaching its conclusion. Bajrami’s own character Lena just disappears from the story, and the presence of Zem (Andi Bajgora), the boyfriend of one of the gang, is a convenience that is unnecessary and which unbalances the group a little.

However, there is much to like about The Hill Where Lionesses Roar; not only does it present a relatively unknown part of the world to audiences, but it is definitely an announcement of a new directing talent.

The Hill Where Lionesses Roar plays at the Raindance Film Festival 2021.