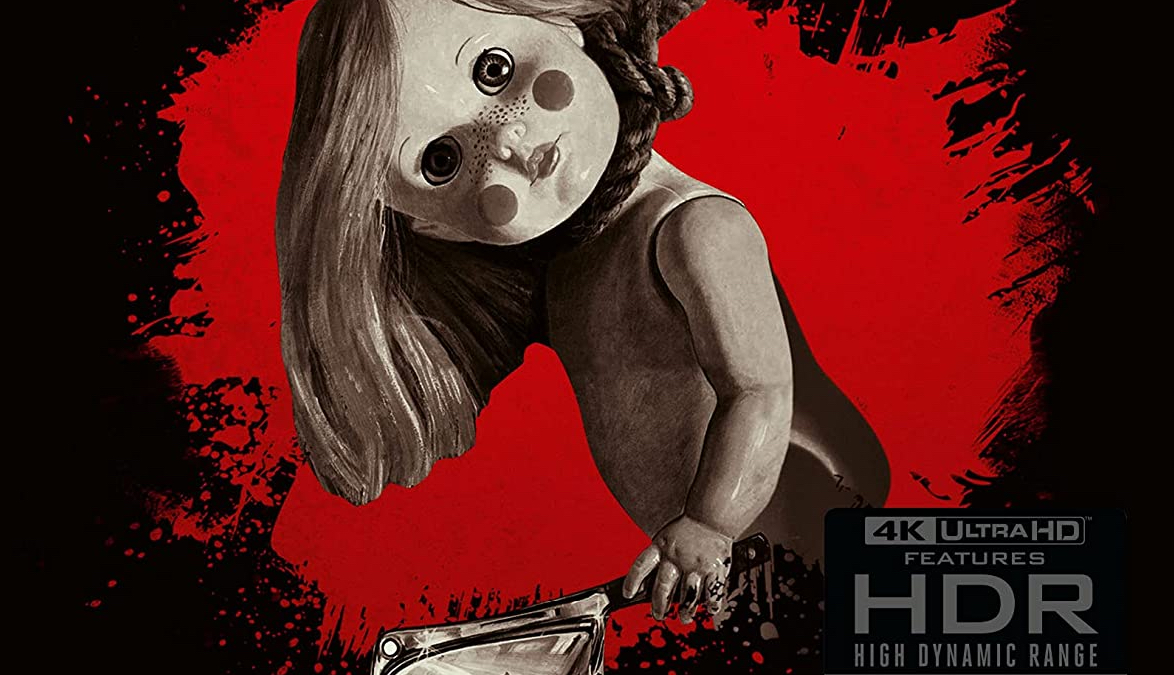 Dario Argento’s early career rise to director feels like one of the best career ascents since Billy Wilder.  In the late 1960’s Argento is a screenwriter for both Sergio Leone, and Umberto Lenzi.  One can imagine the lessons learned from two completely different masterful directors.  After a string of successful Westerns and War films, Argento goes on to direct one of the most audacious debuts in horror cinema with The Bird with the Crystal Plumage in 1970.  On the heels of that uber-successful film back directs back-to-back films in 1971; The Cat O’ Nine Tails and Four Flies on Velvet.  It would be three years and a failed historical epic (The Five Days) that would bring him back to his Giallo roots, with great success in Deep Red.

David Hemmings plays Marcus Daly a pianist living in Italy, whose life is upended when he partially witnesses the murder of a psychic.  This leads Marcus down a rabbit hole of murders, deceit, and a game of cat and mouse with a killer who is more the cat than Marcus realizes.  Marcus is aided by Gianna Brezzi (Daria Nicolodi) a reporter who seems to be fascinated, repulsed, amused, and charmed by the musician, oftentimes all at once.  Their investigation pushes the killer further and further towards the final third act conflict.

Anyone that has seen a few 1970’s era Giallo will instantly note the structural similarities almost immediately as they have been done to death and border on parody.  What Deep Red lacks in narrative originality and boldness more than makes up for in stylish direction, design, and execution.  Argento has created an angry film with conflicting almost contradictory viewpoints.  Deep Red seems to want to focus on counterpoints; progressive vs. conservatism, feminism vs. masculinity, homosexuality vs. homophobia.  All play out in the film in a very modern way.  Argento shows the unfiltered bigotry of characters in stark contrast to the progressive forward-thinking ones.  These counterpoints play out in the background never really becoming plot points rather it adds to the ambiance of the piece.

As directed by Argento the film is an amazing piece of horror mystery as there has been.  The director’s camera constantly roving as the killer.  Macro photography that details the killer’s charms and keepsakes. Much of the direction is similar to Jonathan Demme’s work with the subjective camera. Much like Demme’s filmography, the work here still feels fresh almost forty-five years later.  There is a sense of playful confidence in the work, a master knowing how an audience will react and subverting that.  There is an ornateness to the set pieces that recalls Hitchcock but never feels like he’s aping the master’s style.  In all Argento’s work, especially, Deep Red, he feels like he’s digested cinema and style and he’s truly processed it, to come up with his own style.

Deep Red is the filmmaker at the top of his game before the dream logic took over his work.  The story is still grounded in a world with normal conventions of the Giallo Film.  To put a blunt point on the matter Deep Red is, in fact, the best “Giallo Film” ever produced.  Its strict adherence to the rules and form of the genre brings something out in Argento’s direction and writing.  There is a focus to Deep Red that isn’t present in his later work.  The film is layered with subtext and super text in a way that still works today.  The direction is uniformly terrific, with as much style and thought given to even the smaller scenes that separates it from its peers.  It is fitting that this earmarks the end of a moment in Argento’s career.  He would return to Giallos of course.  A year later in fact.  But Suspiria is a new form of Giallo, with the adding of the supernatural element that is only hinted and flirted with in Deep Red.  Much of his later work (Post-Suspiria) within Giallo becomes an outright nightmare, hindering on dream logic and the supernatural more than reality.

Deep Red is one of the high watermarks of Dario Argento’s career and by default the Giallo genre itself.  Story, performance, direction, and theme all collude to create a potent cinematic experience.  If one has not seen Deep Red, you have missed out on not one of the great Giallo’s but one of the truly magnificent films ever produced.

Note that this is a new 4K restoration of both the original 127-minute Italian version and the 105-minute export version from the original negative by Arrow Films.

This new 4K Restoration created for this UHD 4K discs release truly shines.  The Dolby Vision and HDR10+ encoding give the transfer a lush layer of color, contrast, black levels, and all-around detail that even the 2018 Blu-Ray could never produce. With the advent of UHD, we have truly gotten to a point in Home Video where the transfers feel as good as watching the film on the big screen.  In the case of Deep Red this disc far exceeds any of the theatrical presentations I’ve seen (twice in the cinemas if you must know).

Rather than having one disc house the two versions, they’ve wisely chosen to spread the films over two UHD discs. This allows for both versions to have the largest amount of space on the disc.

Arrow has smartly included all the previous features included on their Blu-Ray edition of the film and added a few new ones.

The newly recorded commentary from Troy Howarth and Nathaniel Thompson is exactly what you expect from this dynamic duo that has recorded numerous deeply, pun intended, researched, and entertaining commentary tracks, here is no different.  Some of the details include both calling it one of their Favorite Argento Film and Giallo, the production length, the various versions of the film and a discussion about the subtractions, the progression of the style of Dario Argento, the style of Giallo, the fact that this is a non-anamorphic but framed perfectly and still composed, the work of cinematographer Luigi Kuveiller, the reason why the dubbing wasn’t done by David Hemmings in English, the work of Hemmings in the film, his thoughts on the film itself, Hemmings career on the stage and theater, the LBGTQ+ characters and stories in this film and in other Giallos, Argento wanting to make a Giallo centered around a gay couple, the score and the trouble with its production, the fall out between Ennio Morricone and Dario Argento, John Carpenter’s love of Argento and Argento’s influence on various Carpenter’s projects including Halloween, Halloween II, and The Fog, Argento’s learning from the various masters he worked with during his time as a screenwriter, the work of Nicoletta Elmi who eventually worked on Demons, the Deep Red musical that was a failure, the imitators and how Argento changed gears because of that, and how that begat the creation of Deep Red, the relationship Daria Nicolodi and Argento, Carlo Rambaldi’s Makeup FX work, and much more.  Cannot recommend this commentary track enough.

The archival audio commentary by Danish Filmmaker and Historian Thomas Rostock begins with discussing the opening moments.  Some of the details include the way that the opening title scene interrupts itself, the origins of the film and how Argento’s idea of a psychic in an opulent theatre for another film transitioned to Deep Red, how they achieved some of the macro look at the various serial killer ephemera, how the bar featured prominently in the film was actually a built set that the city asked Argento to not tear down because they loved it so much, the vagueness of the sexual relationship between Hemming and Nicoldi’s relationship and why it was important to the story, how the casting of Nicoldi came about, why he cast Macha Meril, the themes of fascism and violence in Italy’s past that plays out in Deep Red, the use of LBGTQ+ characters in Argent’s films, the development of the script and the massive assist by novelist and co-writer Bernardino Zapponi, how Argento has been compared to Hitchcock but how that is just not true because of his directorial style and his use of multiple subjective points of views, where Deep Red lines up within Argento’s filmography, Argento’s later era films and their less than successful attempt to have the director return to Giallo, the ending and how the film is wrapped up, and much more.  Rostock gives us a solid commentary track that does feature a lot of descriptions of what is occurring through … he manages to imbue these moments with information about what he’s talking about with some truly great insights.

Profondo Giallo is a 30-minute visual essay by critic Michael Mackenzie that takes an In-Depth look at Deep Red, its influences, and its place in Giallo history.

Rosso Recollections is a 20-minute interview with Dario Argento.  The director is still critical of his work here but it is nowhere near his criticisms of The Cat O’ Nine Tails.  Here Argento seems to have a genuine affection for his work (which good reason, it’s masterful), breaking down how the project came to be, and his history and future with it (he wanted to do a 3D remake which was cast aside once his terrible Dracula 3D was released).

The Lady in Red is a 25-minute interview with Daria Nicolodi about her role in the film, her career, and her time with Dario Argento.  It’s a great interview filled with interesting tidbits about the making of Deep Red and the personal drama that led Argento to make the film. Her comments about Argento’s remake plans are especially fun and pointed.

Music to Murder For! is a 15-minute interview with Goblin’s Claudio Simonetti.  The Keyboardist for the seminal Italian Prog Rock Band discusses how they became involved with Deep Red, their history with Argento, and their recent reunion tour.

Deep Red is one of Argento’s very best Giallo and Arrow has gone even further with their 4K UHD release!   Highest possible recommendations!!!!!

Note: Parts of this review were taken from the original 2018 Arrow Video Blu-Ray