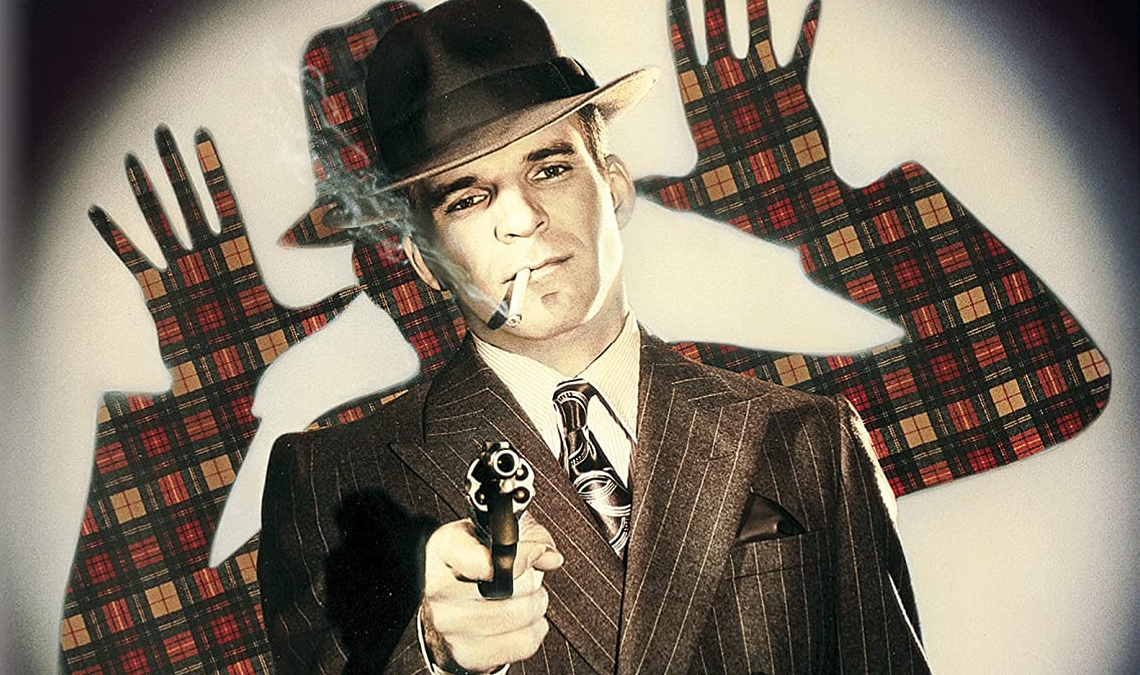 This high concept satire/love letter to Film Noir is as good as any of the Martin/Reiner collaboration got.  It may have to do with the fact Martin’s co-stars are Bogart, Davis, Bergman, Grant, and so many more.

Down on his luck, is there any other kind, PI Rigby Reardon (Martin) is brought into the missing case of Scientist and renowned Cheesemaker John Hay Forrest by Juliet Forrest (Rachel Ward), his daughter.  Missing persons, murders, cross-dressing, insurance fraud, and Nazis all play a part in a plot so convoluted that The Big Sleep looks like Good Night Moon by comparison.  Be sure whether it’s trailing Walter Neff (Fred MacMurray) or trying to get his drunk mentor Marlowe (Humphrey Bogart) to help him, Reardon will get the job done.  If he survives is another matter altogether. Just don’t say the words “cleaning woman” around Reardon.

One had wished that Martin had gotten his wish to be able to do more serious work because, beyond the layer of funny, he’s an adept dramatic performer.  As Rigby Reardon, Martin never really winks at us this is a comedic performance.  Martin is able to create a performance that’s both serious and funny.  It is both sincere and sarcastic.  It helps that Rachel Ward is as nimble a performer as Martin being able to toe that magical line.

The brilliance of Carl Reiner’s film is that it both loving homage and its own entry into the lexicon of film noir.  It isn’t just a perfect facsimile of a film of that era.  It’s a sly nod to the troupes and clichés in the genre.  Working with an impressive behind-the-scenes crew that includes cinematographer Michael Chapman, production designer John DeCuir, set decorator Richard Goddard, and legends composer Milkos Rozsa and costume designer Edith Head both of whom’s these were their last films.  Each of these department heads working with Reiner and Martin creates a magic trick that’s both the joke and a truly wonderful piece of high concept cinema.

The film has aged wonderfully and shows even greater skill with the advent of digital workflow would make this much easier but not quite as amazing as this film that was created at least a decade and a half before digital workflow became a working thing.  Though one would think that you would need a knowledge base of film noir that just isn’t the case.  Dead Men Don’t Wear Plaid, though very adroit at dropping in film clips to service the story, is funny on its own.  Yes, it does add a metatextual layer if you do happen to have seen The Big Sleep or Double Indemnity or Suspicion or The Bribe. It is a bonus the film has that extra layer of fun for cineastes.

Dead Men Don’t Wear Plaid is an amazing achievement in film and comedy as there has been in the last four decades.  Amazing because it works both as a satire of film noir and as a neo-noir.

The gorgeous black and white cinematography by Michael Chapman transferred to Blu-Ray wonderfully.  The transfer provided by Universal to Kino is a sharp handsome image.

The newly recorded commentary by director Allan Arkush and Historian Daniel Kremer was recorded a few weeks after the passing of Carl Reiner.  Some of the details include the opening titles, this being Miklos Rozsa final score, the high concept of the whole enterprise, how huge Steve Martin was at the time of the film’s release, the creation of The Aspen Group and what they produced (it was Martin’s company), the fact that Arkush was up for Pee Wee’s Big Adventure (his concept is very interesting), shooting black and white movies, production design for black and white movies, how the “color values” translate to black and white photography, how amazing Chapman’s work is at matching the various movies they lift from, the work of Edith Head and how fitting this was her last film, how there were no criticism from the actors about the pulls for this film (they were almost all alive at the time of release), an inventive brand that Edith Head created, just how impressive Head’s work was and how impactful her work was on culture, the development of the script which originally did not have the classic film noir clips inserted into the story, how the infamous Cary Grant scene was achieved, the career of Rachel Ward and her appearance here, the challenges that Michael Chapman went through to achieve the look, the solutions that Chapman came up with to be able to match, a great tidbit about film lenses and Stanley Kubrick, the career of Carl Reiner and Arkush working with him, the failure of Pennies from Heaven, and much more.  Arkush and Kremer do a great job of discussing not only the film but also the Film Noir classics the film lifts from.  There are some truly fantastic anecdotes and side tangents that are well worthy of this truly funny and intelligent film.

Buttometer Teaser Trailer (1:47) – a truly strange and hilarious teaser that doesn’t have a piece of footage from the film.  Much like a great teaser for Toys (with Robin Williams) it has Steve Martin doing a bit.

Dead Men Don’t Wear Plaid is as funny as it was the day it was released … though you won’t need working knowledge of Film Noir to truly enjoy this one.  Highest recommendations!