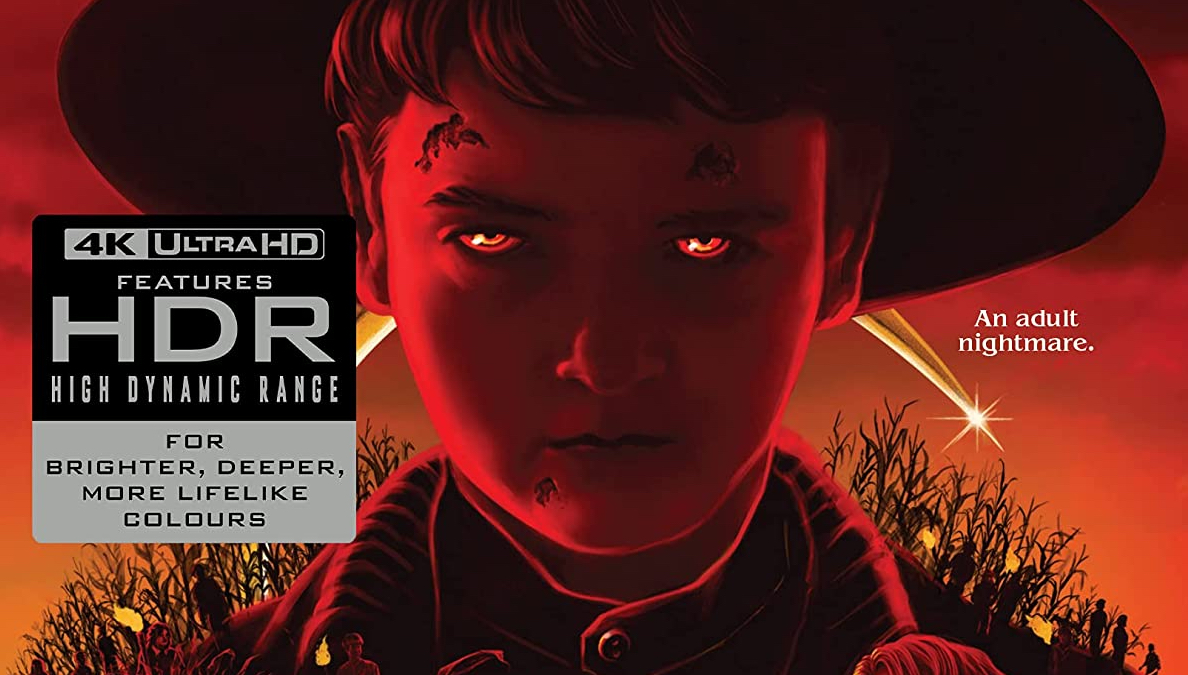 MALACHAI!!!! Arrow Video has reissued/updated their Children of the Corn release to a shiny new 4K UHD edition with Dolby Vision encoding!

What’s so fun about Children of the Corn is just how silly and lunatic it is.  From its opening moments of children taking over the two of Gatlin Iowa.  To the creepy one-two combo of main villains Isaac (John Franklin) and Malachai (Courtney Gains). To Peter Horton’s hair.  Everything in this film is designed in another world.  That world just happens to be the Stephen King-verse so it all kind of makes sense, all but Peter Horton’s hair.  Horton’s hair may actually go down as the most 80’s hair that ever did 80’s in the history of the ’80s.

What makes Children of the Corn so indelible and memorable is those very touches.  The fact that the film goes to the places you don’t expect it to with children murdering en masse an entire town in a very creepy and chilling opening scene.  Director Fritz Kiersch directs the film with zero irony or any sort of tongue in cheek. This benefits the film as a whole as it feels it takes it’s crazy (both intentional and unintentional) very seriously.

The film belongs to Franklin and Gains as the Alpha and Omega of this cult of kids.  Horton and Linda Hamilton (released 6 months earlier than her Star Making role in The Terminator) are essentially vacant vessels to push the plot along.  We really never care for these soon-to-be yuppies (Horton’s aptly named Burt) and their fight to get out of this Twilight Zone episode.  They’re literal fodder for the bad kids to chase and speechify in the general direction of.

It all ends as you expect it will but the package all together is surprisingly entertaining.  Gains in particular makes this a film that you can’t turn off.  His Malachai is so iconic that he’s literally spurned countless nightmares of cultish Red-Headed teenagers stalking innocents in the cornfields.  Children of the Corn isn’t the best Stephen King adaptation but it’s a lot more fun than most and with its R-rating isn’t afraid to show off the more lunatic it has on its mind. Mainly, kids killing adults… a truly terrifying albeit oddly surreal visual to be sure.

Brand new 4K restoration from the original camera negative by Arrow Films is an upgrade to the 2K restoration from the original camera negative a few years back with their initial release.  The upgrade and the Dolby Vision encoding do make the image a slight bit darker (e.g. greater contrast levels) but do not take away from how good this transfer is.  The color reproduction, grain structure, and sharpness all contribute to a truly beautiful release (especially with consideration to the low-budget origins of the image).

The first commentary is a fan/critics commentary by writers Justin Beahm and John Sullivan. Both do a good job of making the commentary a conversation about the history of the film and the context within film history and Stephen King’s career.  A solid track.

The second commentary track is an archival one with director Fritz Kiersch, producer Terrence Kirby and actors John Franklin and Courtney Gains who play bad kids Isaac and Malachai.  The track is a lively affair with everyone trading production stories and discussing the film’s history itself.  It’s more entertaining than informative.

Harvesting Horror (36:15) – is an archival featurette on the making of the film.  The detailed look at the production has most of the major cast and crew are involved minus both Peter Horton (who’s absent from all materials) and Linda Hamilton (who gets her own featured interview with It was the Eighties!).  Of course, Stephen King has disavowed all knowledge of this film, so he also does not appear.

Field of Nightmares (17:19) – is an archival interview (from the previous Arrow Edition) with screenwriter George Goldsmith discussing the adaptation process and his history with the material.

Return to Gatlin (16:29) – is an archival interview (from the previous Arrow Edition) that features writer John Sullivan going back to the Iowa locations the production filmed at.  Definitely seems more interesting than a trip to the Field of Dreams baseball field (also in Iowa).

Cut From the Cornfield (5:30) – is an archival interview (from the previous Arrow Edition) with actor Rich Kleinberg looking at one a missing scene that’s referred to in the film dealing with the Blue man or as he’s referred to by the kids The man who walks behind the Rows.  It’s an interesting look at these lifted moments from the actor’s perspective.

It Was the Eighties! (14:07) – is an archival interview with star Linda Hamilton.  Hamilton is both amused and slightly embarrassed by this low-budget horror film that was released only a few months before her breakthrough The Terminator.

Welcome to Gatlin: The Sights & Sounds of Children of the Corn (15:29) – is an archival interview with Composer Jonathan Elias and Production designer Craig Sterns on creating the score and creating the visual look (and what it took to find all that corn, of course).

Stephen King on a Shoestring (11:18) – is an archival interview with producer Donald Borchers on what it took to produce the film on a limited budget.  Though, it should be said that it was a different era, and this actually would be considered a bigger budget production in the independent filmmaking world now.

Disciples Of The Crow (18:56) –A short film made in 1983 of the original King story.  What makes this so fascinating is the fact that it was a part of King’s “One Dollar Deal”.  Any King fan will be delighted to dive into the short.  Non-Fans for more information just look up the terms on Google or your favorite search engine for more details.  The short is solid albeit different than the film and eventual series.

Arrow delivers another upgraded 4K UHD package too good to pass up with Children of the Corn. Recommended.