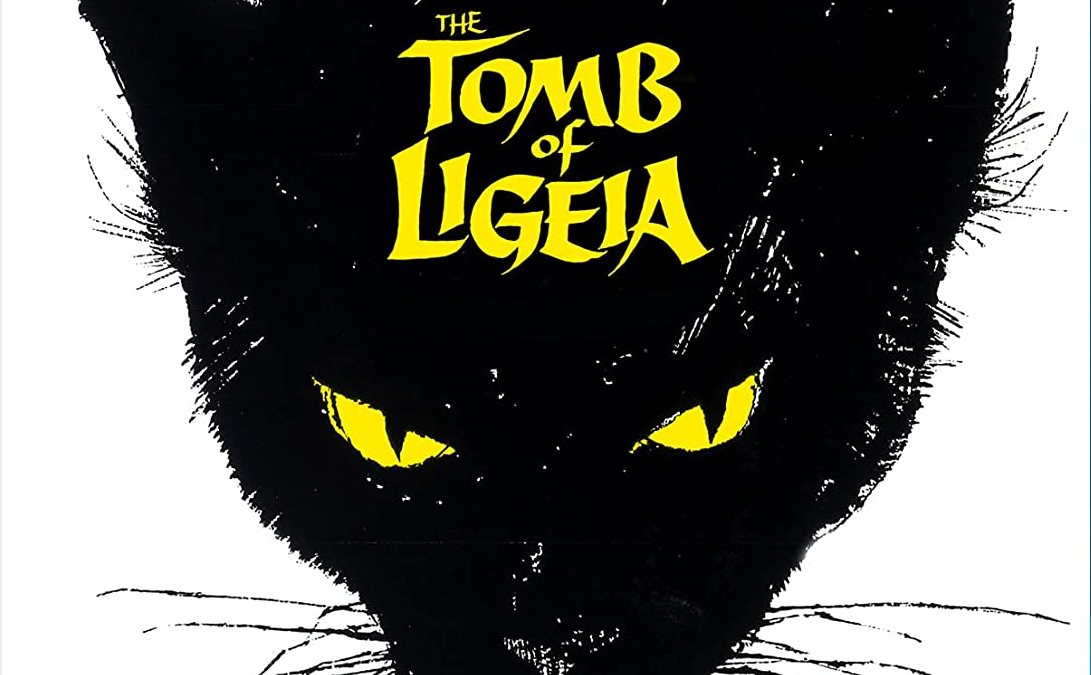 Roger Corman’s The Tomb of Ligeia is the last of his Poe Adaptations with Vincent Price and it’s a glorious gothic romance.  Kino Lorber brings this haunted romance to Blu-Ray filled with special features.

Many people think that Roger Corman only made cheap schlock.  Yes, he made shlock. Yes, it was also produced on the cheap.  What many do not understand that Corman also made truly wonderful films.  Fans will often point to Corman’s Edgar Allan Poe adaptations as their proof positive that Corman did and could make wonderful cinema.  Tom of Ligeia is the last of the Corman-directed Poe films starring Vincent Price and it’s a stunner.

Tomb of Ligeia feels as though Corman understood this would be his last collaboration with Price and his last Poe Adaptation.  There’s a go for broke attitude that everything is done with.  From production design, costumes, cinematography, screenplay, and acting is all elevated in a way that the other Poe/Corman films never were.  It is not a dig at the previous efforts they are still are the best of Corman’s work as a director.  Here it feels refined.

It helps a great deal that Tomb of Ligeia is the only of Corman’s efforts to be shot on location in England.  The films still feel hypnotic in the dreamy nightmare that the rest of the films do but less stage/set bound giving the film a grounding that the others did not have.

Center stage is Vincent Price as Verden Fell the doomed romantic lead of the film.  Part of what makes the film so good is Price’s understanding the chance he was given later in his career (he was in his early 60s by this point) to be a romantic lead.  Price along with Elizabeth Sheperd plays the gothic romance with subtle and passion you would expect from these types of films but not necessarily from a Corman production.

The Transfer provided to Kino from MGM seems to be the same one that was given to Scream Factory.  It’s a solid transfer.  The image is sharp, and the color reproduction definitely pops.

The newly recorded audio commentary by historian Tim Lucas is a deep dive into this AIP production and director Roger Corman’s production.  Details include how this was the last of the Poe adaptations and Corman’s transition to other fare, the difference between the story and the adaptation by Robert Towne, quotes from the story and other Poe work that informed the production and costume design of the film, the work of screenwriter Towne after this project and his renown as a “script doctor”, the work and career of Vincent Price, the work and career of Elizabeth Shepard, the Pan and Scan version of this widescreen film, the amazing vocal work and how it was achieved by Shepard (without any audio adjustments in post-production), how Corman and Towne met, Towne’s relationship with ghostwriter Edward M Taylor, the changes done to the third act, the way that Corman got around certain aspects of the film, and much more.  This deeply researched commentary track will delight fans of the genre and the film.

The archival audio commentary by director Roger Corman is a thoughtfully entertaining track.  Details include Corman’s thought on Poe and how that informed on his approach on other films and how he changed that theory for Tomb of Ligeia, having Price playing younger than he actually was, the black cat that appears in several of his adaptation, the opening title sequence, his time in England during preproduction scouting, some of the cost-saving tricks he used to make the production appear larger than it was, the trouble with working with animals, the work of cinematographer Arthur Grant, and some good anecdotes from the production.  Corman’s commentary does feature some sections of silence but it is well worth listening to because of the amount of just great information that he gives not just about the production and the work done but how he achieved such great work at low costs.

The final commentary track is also an archival one with Actor Elizabeth Sheperd hosted by Roy Frunkis.  Details include Sheperd’s recounting why the film was shot on-location and with many exteriors, her experience learning how to ride a horse, her discussion of her costuming, her familiarity with all of the actors involved with the production, the adaptation and some of her issues with it, her relationship with Vincent Price, her views on Price and what he did for culture in general beyond cinema, the script by Robert Towne, a hilarious tidbit about the cat wrangler on the film, her experience with head casting in this film and others, her first meeting of Roger Corman (including her diary entry at the time), her account of the cat chasing set piece, the look and how it was achieved by Corman and cinematographer Arthur Grant with their choices of film stock, working during Television in Britain in the 1960s, the changes they made to the hypnotism scene and the work that she went into making that scene, the changes that upset her that were made from Poe’s story to the screen adaptation, the dream sequences, the dangers that came about with shooting the finale, and much more.  Frunkis does a great job of prompting and discussing topics without taking over the track from Shepard.

TRAILERS FROM HELL with Joe Dante (3:13) – Director Dante provides a micro-commentary for the film’s trailer from the ever-popular Website Trailers from Hell.

Tomb of Ligeia is an unexpected bit of gothic romance.  Kino has given the film the deluxe treatment.  Recommended!!!!