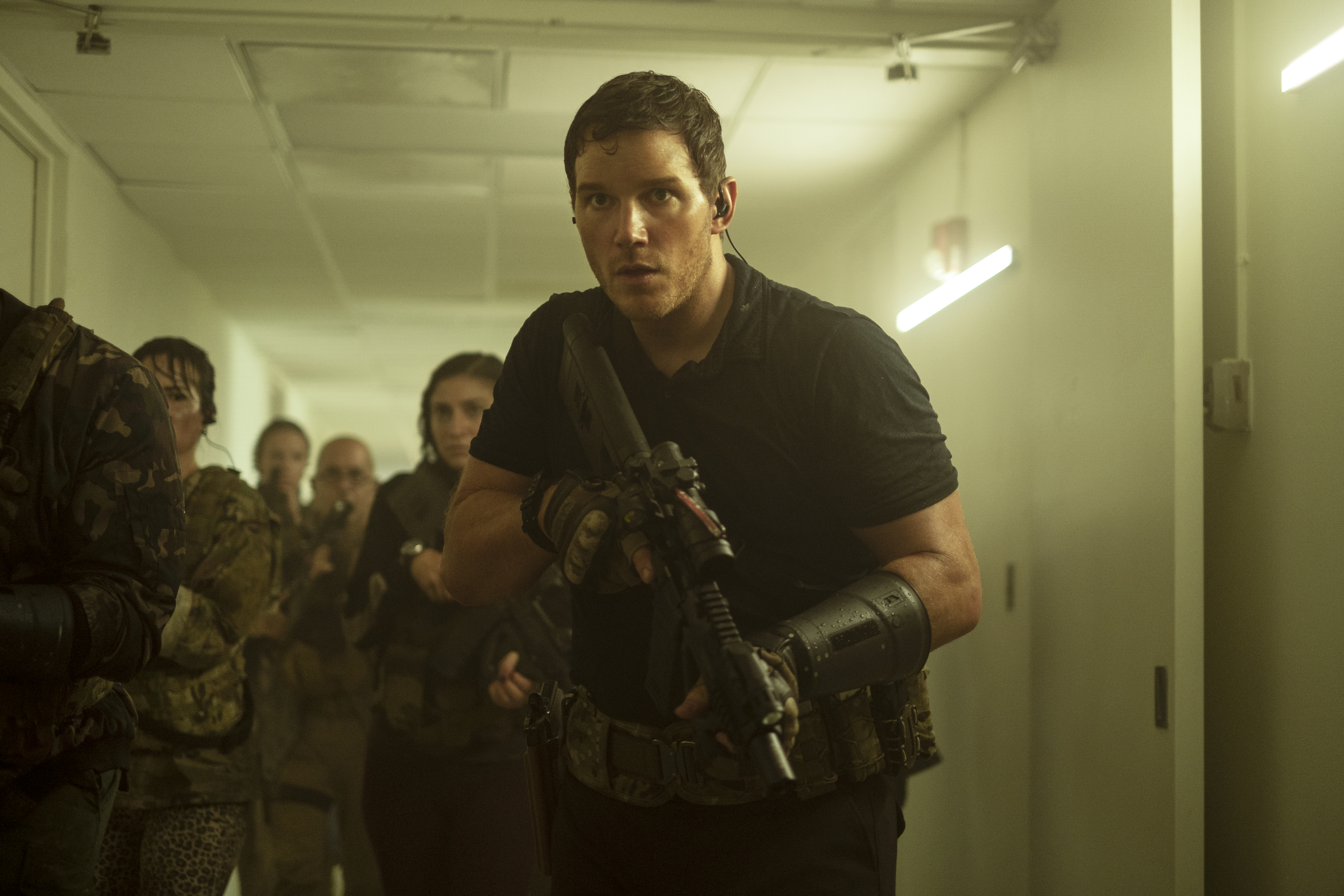 Aliens 28-years from 2022 invade the earth.  They quickly begin to eliminate the human species leaving only 500,000 left.  Earth’s only hope is to travel back in time to conscript people from 2022 to serve in the war against the aliens. Service is 7-days and only a 20% chance of survival.  As a draft is instituted it is only a matter of time until high school science teacher Dan (Chris Pratt) is conscripted.  A former member of Delta Force and a loving father the man promises his daughter and wife (Betty Gilpin) that he will return.  As a part of a rag tag group of conscripts (Sam Richardson, Edwin Hodge, Mary Lynn Rajskub among others) in the future everything goes wrong leading Dan and a few survivors a fleeting chance to stop … Tomorrow’s War.

On paper this should work.  Chris Pratt versus ugly mean aliens.  It only partially works.  The action and design of the world works.  Director Chris McKay working with cinematographer Larry Fong, production designer Peter Wenham, VFX Supervisor James E. Pierce and Special FX Supervisor J.D. Schwalm create a world of the future that feels tactile.  The action and set pieces are generally robust, albeit from the Call of Duty-style combat scenes.

It’s in the execution of the human story where the film does not live up.  The stories of parents, children and forgiveness is the sort of cliché plots that we’ve seen literally a hundred times before.  Tomorrow’s War does not elevate these contrivances beyond the standard-issue “let’s make the star look wholesome”.  Without ruining any plot details, many who have seen any sort of time travelling movie about family dysfunction (there are plenty) will see things coming from well before its revealed to us.

JK Simmons and Sam Richardson are the standouts in a cast of actors that are more stranded with the minimal character given from the script.  Simmons is incapable of a bad performance and would read the phone book and still be compelling.  As Pratt’s estranged father, Simmons brings his gravitas and dry wit to a role that could have been a bark-bark-snooze fest. The same for Richardson who is delightful as the man out of sorts.  His use of the work “shit” in an entire action scene is the highlight of the film.  The two are paired for the final third of the story to make for some of the best exchanges of the whole enterprise.  One only hopes that other filmmakers will pair these two together.

Much of the film revels in the spectacle of Aliens vs Human’s ala Independence Day or the often forgotten Battle: Los Angeles and other similarly minded big budget spectacle.  It is when it veers into the earnest family drama that the film stumbles, falling flat.  If one can look over some of the more derivative scenes of dramaturgy Tomorrow’s War is entertaining if not very inspired filmmaking.