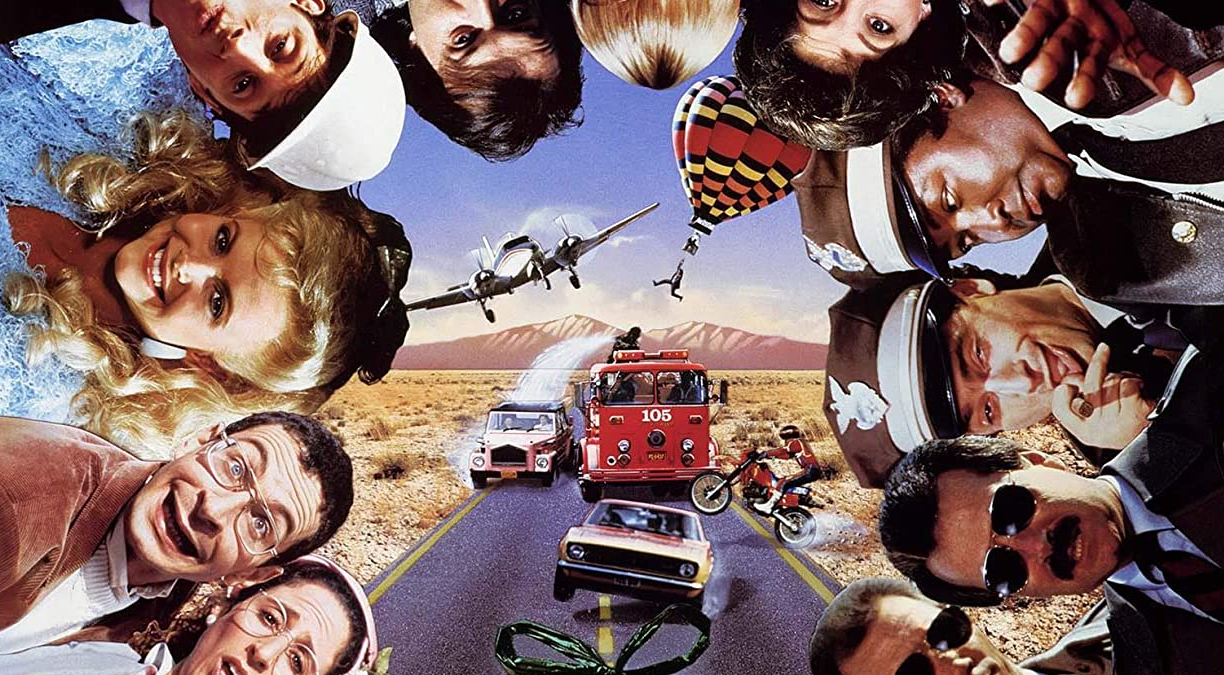 Million Dollar Mystery is a stunt-laden comedy that tries to harken back to It’s a Mad, Mad, Mad, Mad World.  New to Blu-Ray from Kino Lorber.

A supposed White House staffer Sydney Preston (Tom Bosley) steals $4 million in cash and proceeds to hide it in and around Arizona… in and around bridges.  You know because Arizona is known for all of its bridges and additionally had some great budget tax shelters (Dino didn’t love saving a buck).  As Preston is traveling back home he stops in a dive diner where the chili proceeds to kill him.  Before his death he tells the customers and owner of the establishment he hid the $4 million in $1 million caches around bridges, then dies.

Armed with this knowledge these greedy white Regan-naughts proceed to drive to the various locations.  Said greedy white people include; a family where the kid is smarter than the parents, a nerdy couple that has sex on the mind, a brother and sister restaurant owners, a pair of wrestlers, a future right-wing Capitol Storming nut (who’s a park & game employee who fits himself as a Rambo tyle), a “talent manager” and his four blondes “singers”.  This crafty lot move from clue to clue finding the money and managing to destroy each of the caches.  It all ends in a big to-do at the London Bridge (yeah the fake-ass one that Arizona has because if you read your history you’ll know that the original one was destroyed).

What is essentially a riff of It’s a Mad, Mad, Mad, Mad World is as crass as it sounds.  There is nothing wrong with a crass remake.  This reviewer loves all things rip-offs made by the Italians in the 70s and 80s.  In order to properly rip off, one must actually do what was intended in this film… which is to be funny.  Unfortunately, mildly amusing is what was the outcome.

Million Dollar Mystery’s version of comedy is during the credit sequence, Preston stuffs different receptacles full cash while smart enough to steal from the White House (where I guess in the cocaine-fueled 80s they kept caches of cash to no doubt pay of the Contras, Iran, and General Noriega) does various “funny things” like cut $100 bills or get his thumb stuck as he’s closing a lockbox.  It’s also the kind of film that thinks that it’s HILARIOUS (all in caps) to have some rando eat toxic waste and the only side effects … FUNNY FACES (all in caps)… wah-wah.  These are the kind of “funny” moments that Fleischer and the screenwriters thought would guarantee laughs.  They do not. Even the best moments of comedy will only bemuse at best.

What Million Dollar Mystery lacks in laughs makes up for in stunt work.  It is too sad that this production was ankled by the death of legendary stuntman Dar Robinson, as it is a showcase for the work done by Stunt Coordinator George Fisher and Second Unit Director Vic Armstrong.  The action here is on the next level.  The car stunt work is gorgeous and outrageous with multiple chase sequences with cars moving in and out barely dodging each other by inches.  The moment when the groups get into their respective cars and attempt to get out of the diner parking lot is of note as it’s a beautifully dangerous choreographed chaos.  They have large buses doing drifts, take that Fast and Furious, planes landing in the middle of a street, and so much more.  Armstrong’s keen eye for geography and camera placement is on display here making some of this work truly amazing and big-screen ready.

One just wishes that Million Dollar Mystery as a whole lived up to the amazing stunt work and action.

The transfer provided to Kino Lorber for Million Dollar Mystery is generally a clean and handsome image. It does appear to be an older transfer but nothing that KL could do about that as they’ve put the film’s best foot forward with modern compression technology.

The newly recorded commentary track by Bryan Reesman is the kind of informative track we come to expect from the author.  Beginning with the film’s partnership with Glad Bags which things only get stranger and funnier (than the movie) as it goes on.  Details include details on how there was a give-away prize from Glad for the movie, the career of screenwriters Rudy De Luca, Tim Metcalfe and Miguel Tejada-Flores, the influence of Cannonball Run and It’s a Mad, Mad, Mad, Mad World, the career of Richard Fleischer of which this is his last film, the career of Tom Bosley, the films of 1987 in the midst of Regan Era that were released during this time (including Wall Street and The Secret of My Success), some great interview quotes from stunt coordinator George Fisher who Reesman interviewed, a side conversation about the vehicles of the film and modern cars, the career of actors Roy Applegate, Pam Matteson, and Rich Hall, Hall’s career with Not Necessarily the News, the career of Kevin Pollack, how the Glad Storage Bag company negotiated ads with De Laurentis Company, how product placement worked in other films in the ET, The Goonies, Gremlins, which leads to discussion toys licenses and the inverse where toys became movies and cartoons, discussions of the various lesser known comedians and character actors careers, the politically incorrect nature of the comedy and comedies in the 1980s, the work of second unit direct Vic Armstrong and the stunt work and stunt people in the film, the death of legendary but very young stuntman Dar Robinson, the history of London Bridge that features prominently in the film, and much more.  As with his other commentaries like The Secret of My Success or The Hot Spot Reesman is able to bring the same sort of deeply researched, fast paced, and entertaining track that he is known for.

Million Dollar Mystery is short on comedy but long on truly great stunt work and action.