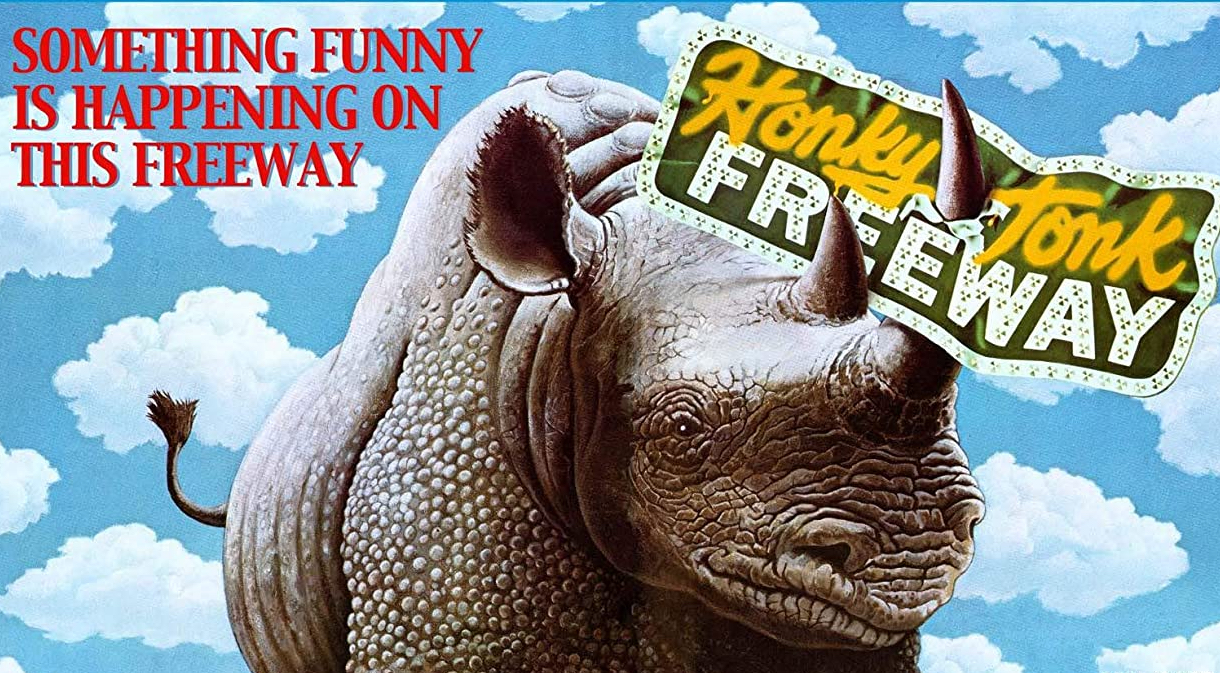 Honky Tonk Freeway could be called Florida: The Movie.  In a good way.  The film makes its Blu-Ray Debut thanks to Kino Lorber.

The multi-tapestry storytelling device works perfectly in Honky Tonk Freeway.  The film is equal parts Robert Altman and Carl Hassan in its way that it interweaves styles, stories, and tones to much success.

The Mayor of Ticlaw Florida (William Devane) sees his town going extinct because he did not pay off the right officials to ensure that the new freeway being built had an exit for the town.  Thinking he’s paid off the right government official, which he hasn’t, the town goes about preparing for the “Tourist Boom” that will no doubt come.  As the road has been constructed and no exit has been made, the Mayor attempts to figure out, in true Floridian fashion, a solution for this issue.

Honky Tonk Freeway is more than that plotline.  The film is a kaleidoscopic dramedy with multiple disparate storylines that come together by the end in the way the Magnolia or Nashville does.  Like both of those films, Honky Tonk Freeway is more of a mood and of a place than it is a story.  Of course, there are various plots like a drug-addicted hitchhiker trying to get to the Superbowl or a family taking an RV vacation, or two Nuns trying to make it to Miami.  These are threadbare and only take minutes of the plot but summed the entire running time creates a milieu that is very Florida.

The cast is populated by a who’s who of early 1980’s actors.  People like Academy Award Winners Jessica Tandy, Hume Cronyn show up as what else… an elderly couple.  Howard Hessman shows up as a lecherous version of Clark Griswold before Clark Griswold.  Speaking of the Griswold’s Beverly D’Angelo has a truly great unique role as a woman who loves sex.   Daniel Stern goes HAM as the aforementioned drug dealer.  On the opposite side, Geraldine Page shows her pious side as a very strict Nun.  And so many more that it’s almost dizzying how many people actually show up.

Director John Schlesinger shows how adaptable he was as director here.  The director of Midnight Cowboy, Marathon Man among others shows just how adept he was at the calamity of human nature.  Working from a script by Edward Clinton the film is able to move from the various storylines always keeping the lighter tone but at times being darkly comedic.  The script and film play to Schlesinger’s greatest strength as a filmmaker; his inane ability to display empathy even for the profane of characters.

One will find Schlesinger’s uncommon touch along with some seriously Florida-wild moments in Honky Tonk Freeway.  It is that balance of crazy and sensitivity that makes the film work as well as it does.

Plus this film has one of the most Florida things ever to grace the silver screen; an Elephant Waterskiing.

The Brand New 4K Master is beautiful and sharp.  The image definitely reproduces the John Bailey early 1980’s hazy cinematography perfectly.  There’s a great patina of grain that runs throughout that makes the transfer looks like a beautiful archival 35mm print of the film.

The new commentary track by historians Daniel Kremer and Nat Segaloff is an insightful look at the production with the film’s producer Don Boyd.  Kremer and Segaloff begin the discussion of this dark comedy.  The details include Boyd talking about Schlesinger casting William Devane a number of times and casting in this film, EMI’s trying to cast alternate leads that include Walter Matthau and Paul Newman with more money, discussion of Devane’s career up until that point and beyond (including a discussion of Schlesinger’s great Yanks), the cast of 113 speaking parts, the importance of casting directors especially this film, a side conversation about the word “director” to other behind the scenes crews and the clash with the DGA’s head (who will remain nameless unless you listen to the commentary), the style that evolved from the original script and how Schlesinger evolved, the Elephant, Rhino and other animals in the film that heavily take part in the film’s plot, the involvement of George Martin (the famous Beatles producer), the work of Beverly D’Angelo in the film, the work of multiple styles of acting and how Schlesinger wrangled that, the complexity of shooting with this many actors, the work of Hume Cronyn and Jessica Tandy, how the film’s themes were misunderstood, the building of the sets and how the rushing of them created issues with the production, how they brought Schlesinger, the costume design of Anne Roth, Boyd’s working with various legendary directors and actors both as a producer or director (including some good anecdotes about Richard Harris), the preview/advanced screening process including the Universal’s thoughts on the film, longer cuts of the film, Schlesinger’s final cut of the film, the massive budget of the film and the failure at the box office, a competition between Boyd and John Landis, and much more.  Boyd is a great commentator with Kremer and Segaloff prompting some great conversations.