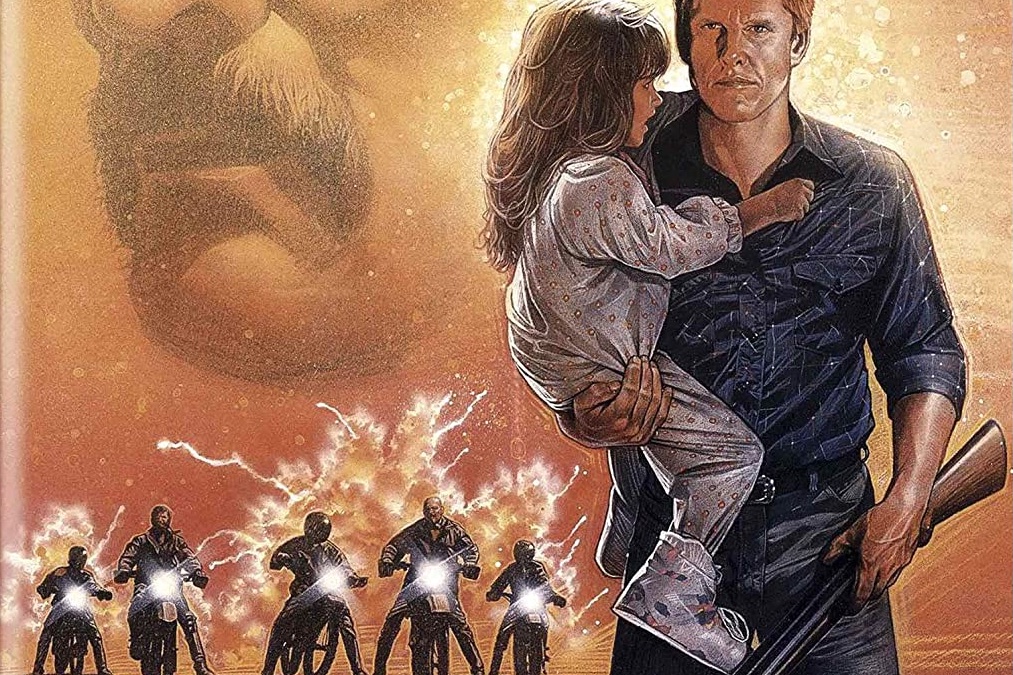 Gary Busey goes to war with William Smith (playing what else… a biker) in Eye of the Tiger.  This 80s cult piece of action lunacy is being released on Blu-Ray thanks to Scorpion Releasing with their new 2K Master.

In answer to your first question… yes, they use the Survivor song (just watch the trailer above).  In answer to your second question, yes, this fucking movie rules.  Grade A aged Cheese never tasted so ridiculously good as it does in Eye of the Tiger.

War Vet Buck Matthews (Gary Busey) returns home after serving a 5-year prison sentence.  He’s just planning on starting over with his wife (Denise Galik) and their daughter (Judith Barsi).  Beginning with the sheriff (Seymour Cassel) things just are right.  When Matthews comes in contact with the local biker gang no one wants to help him.  When tragedy strikes still no one will stand up to the gang led by the evil Blade (William Smith).  Matthews with help from a fellow ex-con who owes him a favor (help in form of what is possibly the most 80s help a white dude taking on gangs in the 80s could get) begins to exterminate the gang in the only way he knows how.  With only his James Brown loving Pilot buddy JB (Yaphet Kotto) they take on Blade and his gang until the climatic apocalyptic showdown.

Eye of the Tiger never blinks at taking everything in this film deathly seriously and never blinks or winks at anything.  Director Richard Sarafian approaches this as though this was a sobering indictment of small-town America and biker gang culture.  The problem is that the script by Michael Thomas Montgomery is none of those things and is literally a straight-ahead actioner about street level justice.  That fight between what the script is and how the direction of that script is executed.

Every performance is taken with the same sort of pitch and tone that the film is.  Busey is the perfect lead as he has zero sense of irony when approaching playing Matthews.  There is this dead eye stare that Busey brings to the entire film.  That stare even in normal scenes, before vengeance becomes an fulltime obsession, makes one think that the performance is predicated on just waiting to go full-on kill-killer and the gang is the excuse to go full Death Wish.  In this era there was something about Busey’s performances that feels like a feral animal that’s a few months outside of being domesticated.  At any provocation that feral animal will unleash the sort of fury one expects.

One thing that this film does right regardless of your thoughts on the film itself, is the unleashing of action fury.  Once Eye of the Tiger shifts into Action Revenge mode the film does not stop until the job is finished. This included car chases, motorcycle stunts, ariel bombings, explosions aplenty and a fisticuffs battle between Smith and Busey.  Sarafian approaches these set pieces with the sort of clean eye for geography that many will appreciate stunt work especially the type that was so prevalent in the late 1980s.

Eye of the Tiger may have your standard-issue revenge plot, but it’s done with an overwrought and overheated seriousness you can’t help but appreciate.  Its inability to wink and node knowingly that we’ve seen this all before is an asset rather than disadvantage.  This one is a Cult Action Classic just waiting to be rediscovered.

The only extra included is the Theatrical Trailer (2:15).

Eye of the Tiger is sure to please fans of cult action films.  Scorpion Releasing has created a beautiful transfer to put the film’s best foot forward.  Highest Possible Recommendations.