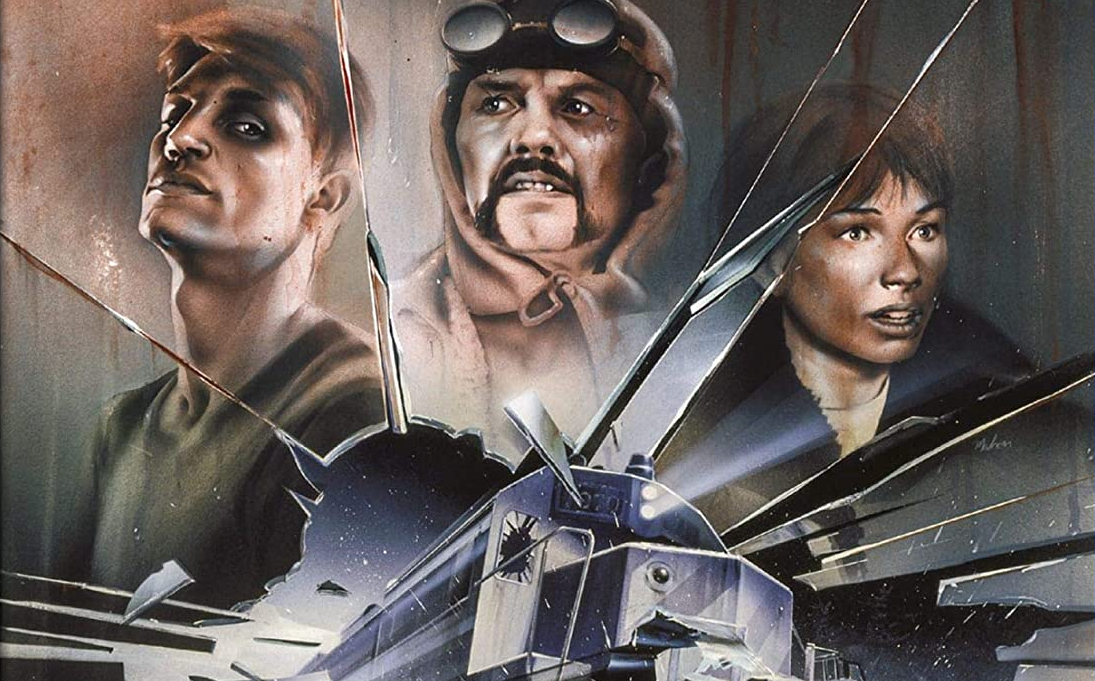 One of the best movies of the 1980s, Runaway Train, returns to Blu-Ray thanks to Kino Lorber.

Cannon Films made some truly terrible albeit entertaining films.  Though as with all things a few good films managed to escape.  Though, only one truly great film managed to be created, Andrei Konchalovsky’s Runaway Train.

The most legendary of Convicts in Alaska’s Stonehaven Maximum Security Prison Oscar “Manny” Manheim (Jon Voight) has been welded into his solitary cell for three years.  After a court victory Warden Ranken (John P Ryan) must release him.  Thus, begins the battle of wills; Manny vs Ranken.  Ranken quickly tries to have a Prisoner and Guards kill Manny to no avail.  Manny has his own plans.  Escape.  Freedom.  In the form of a train.  Taking Buck (Eric Roberts) along with him both get more than they bargained for as the train through a series of mishaps barrels down the tracks towards inevitable destruction.

The barest of plot outlines does not do the film justice.  With a script originally by Akira Kurosawa and rewritten by Eddie Bunker is a deft amazing piece of narrative.  One would think that Kurosawa and Bunker making strange bedfellows, actually turn out to be the best choices to handle scripting.  Both share a common trait.  Which is their interest in societies treatment of humans.  Specifically, the outcasts of society.  As a result, the film’s script nimbly moves from prison film, to escape film, to adventure film, to eventually social commentary.  All the while being a cohesive whole rather than a disjointed narrative one would think.

The film never diverges into cartoonish buffoonery that many of the Cannon Films do.  The 83-year-old Konchalovsky who career is as diverse as having directed the recently released DEAR, COMRADES! to much acclaim, to being one of the 18 noted directors on the infamous Tango & Cash.  This film feels as though it is a bridge between nonsense like Tango & Cash and his screenwriting work with Andrei Tarkovsky.  The film is as visually impressive as anything he’s done.  Working with cinematographer Alan Hume is jaw dropping in its execution and delivery.

Not to be outdone by the visuals, Konchalovsky’s real power is in his actor’s performances.  His direction so good it led to both Voight and Roberts being nominated for Academy awards.  Both actors find the perfect rhythm to bounce off one another.  Voight and Roberts ebbing back and forth and playing the reality of the “friendship” is one of the strongest threads in the film. One that both actors get to respectively take center stage during the course of the film.

Not to say that the film is a two-hander.  The work by Rebecca De Mornay and John P Ryan is as good as both Voight and Roberts.  Ryan’s warden is as quietly menace a character as put on screen.  De Mornay is short changed but it doesn’t take away from her excellent work.  Even smaller roles filled by Bunker, TK Carter, and Kenneth McMillian are textured and fully realized.

Runaway Train is the rarest of all films a socially aware popcorn film of the highest order.  One that any action fan will want to revisit again and again.

NOTE: As much as I love Tony Scott, he stole liberally from full section of Runaway Train for his Unstoppble.

The Brand New 2K Master is nothing short of amazing. The original Twilight Time Disc is from an older transfer that had its issues because of that.  Kino Lorber has done the film justice with this new Master.  The image is sharp with a beautiful grain structure.  Cannon films often times were never the best shot films but here the image photographed by the great Alan Hume is dynamic and robust.  The resulting transfer is beautiful representation of the film giving it the look of a freshly struck 35mm archival print.

The archival commentary by star Eric Roberts, historians David Del Valle, and historian C Courtney Joyner is an informative charming delight.  Roberts is very forthcoming, charming, and very informative about the production (and does a great Golan impersonation).  Details include the production moving from Montana to Alaska, Jon Voight’s body suit, a great Eddie Bunker story about Danny Trejo being his boxing coach, working with director Andrei Konchalovsky, working with John Ryan, the differences between the film and Kurosawa’s script (which was 300 pages), the shock of being nominated for best supporting actor, Robert’s work in Star 80, the Cannon films of the era, Faye Dunaway, working with the late Tiny Lister, the tough on location working conditions, Roberts getting his Stuntman Union Card and keeping it for years, the reasons why he stopped doing his own stunts (it was here), Rebecca De Mornay’s first day on set, the real-life 40-mile stretch of train track they used, the train set they built, the use of Video Assist (which was a newer technology), the difficulty shooting in Alaska where it never got dark, the script work that Eddie Bunker did, the difference between working with Mickey Rourke and Jon Voight, a great tidbit about Michael Cimino, John Ryan’s career after the film, filming the final confrontation between him and Voight, the score by Trevor Jones, later era Roberts’ films post Runaway Train, a prediction from Roberts that proved unfortunately wrong, and much more.  Roberts is an utter delight as he recounts making the film and discussing the production with Del Valle and Joyner.

TRAILERS FROM HELL with Rod Lurie (2:49) – Lurie gives an entertaining micro-commentary on Runaway Train and Cannon Films (including Golan and Globus).