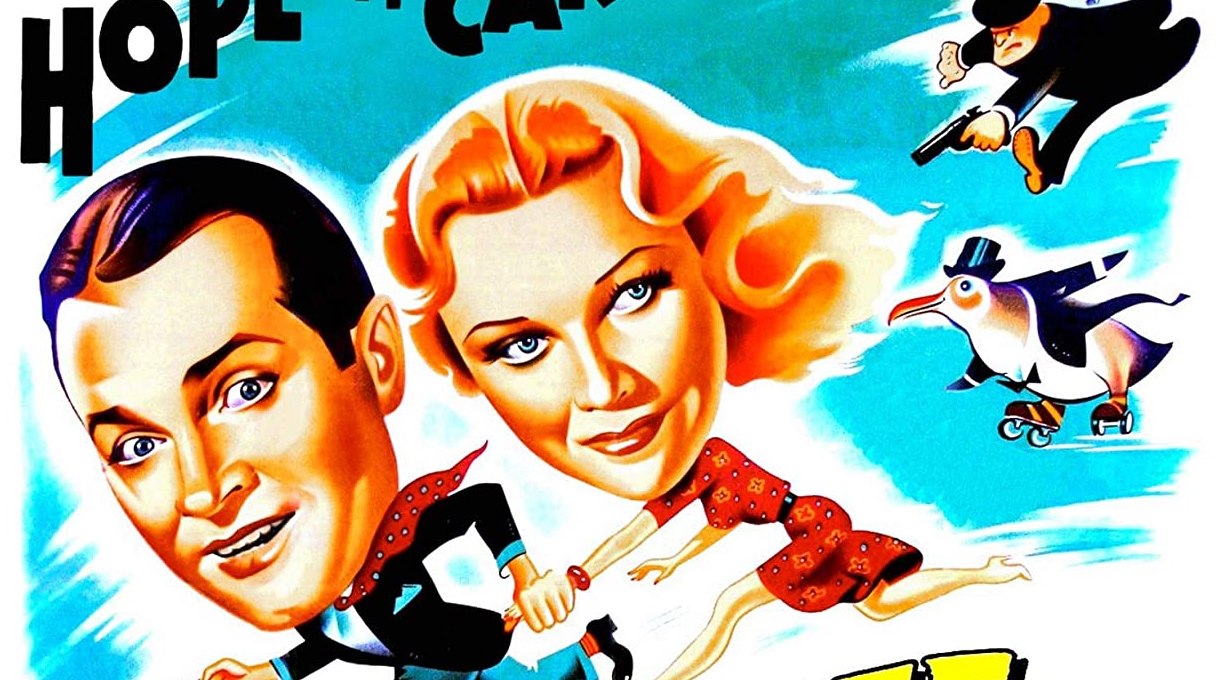 Hope’s effortless charm and comedic sensibility are showcased in My Favorite Blonde.  Madeleine Carroll is equally as good as the Spy that chooses Hope’s hapless actor (and penguin) as her mark/decoy.

A British Spy is killed by no-good Nazi son-of-a-bitches (their official names) the fate of a secret operation hangs in the balance.  Karen Bentley (Carroll) is dispatched to ensure the safe delivery of the operation.  To help her on her way she finds the perfect decoy in struggling actor Larry Haines (Hope) and his partner Percy (a penguin).  Karen and Larry on their way to California are mistaken for Honeymoon killers, shot at by the Nazis, and much more.  Though it all ends as it should and would think with Karen and Larry winning one for our boys and the Brits.

Part of the humor of the piece comes from how much the film apes the Hitchcock style of wrong man movies.  From the trains to going on the run, to the wrongfully accused of murder, to the finale.  It’s all very accurately created here with Hope standing in for Henry Fonda or Cary Grant.  The funniest thing is that Hope does Hitchcock hero as well as anyone and one wonders if he could have been cast by Hitch what magic could have been done.

Carroll is the real secret weapon here playing a very capable Spy who as an actor has to do most of the heavy lifting.  Thought it is not to say that Hope gets all the spotlight.  The crafty moments of Carroll working her trade are pretty convincingly tense.  Which is to say that the Spy moments work as well as the comedic moments, thanks in large part to Carroll’s work.

My Favorite Blonde is a winner, comedy, and thrills.  Plus, one thing that Hitchcock never had.  A Penguin!!!

The Brand New 2K Master is another winner from Kino Lorber.  The black and white photography is glowing.  The grain structure and sharpness make this one a winner.

The newly recorded commentary by historian Samm Deighan gives us a great informative contextual track similar to her commentary track on the amazing film Mephisto. Details include the great context of the time and political atmosphere at the time the film was produced and released, the anti-war sentiment before Pearl Harbor, Anti-Semitism, the parallels to current times, the outspoken nature of Comedians and others being Anti-Nazi and Anti-Fascist, how My Favorite Blonde ties thematically to Casablanca, Propaganda films (not just the ones made by the Military), how the Spy Film and Romances were able to relay the anti-Fascist messages, Bob Hope’s history from Vaudville, Stage, Radio, and then Film and more, Hope’s involvement in the USO for decades, how this film separates from other Hope’s film, Hope’s Filmography with Carroll, Crosby and others, the style and seriousness of the film and how it mixes with comedy, director Sidney Lanfield’s career and work with Bob Hope, the work of the screenwriters and their relationship with Bob Hope, Madeleine Carroll’s career, work with Hitchcock and how it tied to My Favorite Blonde, how Carroll helped with the War Effort and post-War effort in Europe, the Bing Crosby Cameo, how The 39-Steps relate to this film, how the road part of this film relates to Hitchcock’s Saboteur, a surprising dive into the racism of Hollywood (though it completely ties to the film and the deep dive into movies of the time), the interesting and sometimes crazy history of the supporting European actors (that appeared here and elsewhere) that worked in Hollywood and immigrated pre-WW2, how these actors who escaped Fascism to only often times to play Fascists/Nazis, and much more.  Deighan gives us a truly wonderfully detailed and fascinating look at not just My Favorite Blonde but the socio-political context in which this film was made.

KLSC Bob Hope Promo (4:18) – A series of clips from various different Hope that KL Studio Classics is or has released; My Favorite Burnette, Road to Rio, Lemon Drop Kid, Road to Bali, Son of Paleface. Note that each appears to have been wonderfully restored giving us a taste of what’s in store for you if one decides to jump into the Hope Filmography.

This clever play on Hitchcock’s wrong man troupes is a fun time for all.  Kino Lorber has stacked it with a great transfer, commentary, and a plethora of Bob Hope Trailers (you’ll want to see if you find this the least bit of your “cup of tea”).  Highest Possible Recommendations!!!