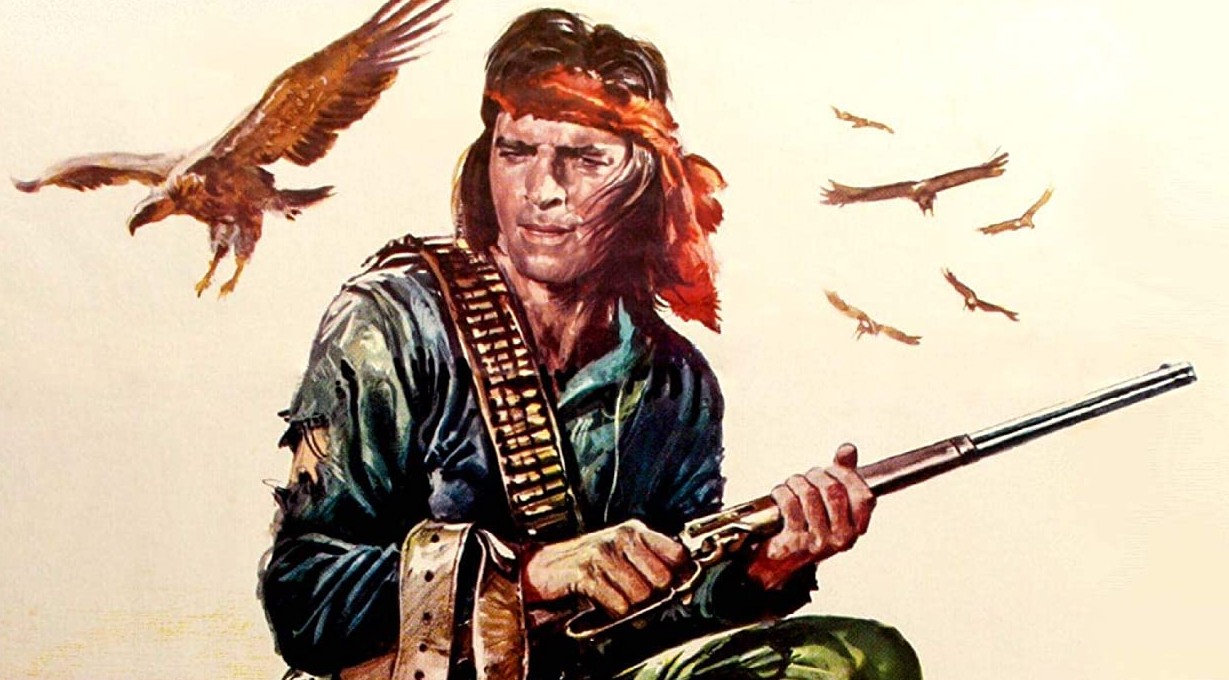 If one looks at Aldrich’s Apache from a lens of the era the story and its focus on the Western Genre are quite progressive. Unfortunately, the “brownface” is unsettling and may have many viewers unable to get around.

Set during the Western Expansion and the US Government’s genocide of the Native American tribes.  Specifically, the US Army’s fight with Geronimo, his surrender, and eventual move to Florida.  As the Apache people begin their long arduous journey to their encampments a few of the tribe continue to right against the Government.  Massai (Burt Lancaster) leads these rogue Apache.  Soon, Massai is caught and put in prison… I mean transported with Geronimo and the rest of the Apache men.  Not having any of it, Massai flees and begins his struggle for freedom.  A struggle that is impeded by Army Officials, hired guns, and even his own people.

In 1954 Aldrich’s lean and mean Western must have felt as progressive as any Western produced.  Lancaster playing a Native American folk hero after Hollywood spent countless entries in the genre using them a gunfire fodder.  The skewering the death and genocide of the first people of the Americas into a game that kids could play in Ike’s America.  The film is definitely siding with the Apache but with caveats.

Those caveats are part of the issue.  Having Burt Lancaster, Jean Peters, Charles Bronson (at the time credited as Charles Buchinsky) all play roles in “brownface” is yes of the era.  It was designed to make this message of “Americans were basically murderous assholes” a bit more palatable and commercial.  It is still shocking that a film in this era has a Native American Massai killing the White Soldiers as the Hero in the same way that White Soldiers were the heroes killing Native Americans.

Credit must be given for Lancaster, in the prime of his career, taking on this kind of film.  It does not seem a coincidence that he produced the film with Harold Hecht.  Lancaster was one of the actors in Hollywood that wanted to make meaningful pictures.  This film does matter as it shows during an era of “whitewashing” there was some push back.

As a film, Apache is a great little convention twisting Western. Lancaster and the cast are great in this film that’s more chase thriller than conventional genre entry.  Aldrich’s lean economical hard-edge direction puts this in the top tier of the era.

Kino Lorber has brought this Technicolor Filmed Western to vibrant life in high definition.  The Transfer for Blu-ray retains the beautiful grain structure without any loss of clarity.  There isn’t any hint of DNR or Digital clean-up that gives a film of this era a terrible look on Blu-Ray.  Rather we have KL presentation of the film looking like a freshly struck 35mm Archival print.

Apache is a Recommend with the caveat that mentioned above in the review.

KL Studio Classics Blu-Ray of Apache is out December 1st