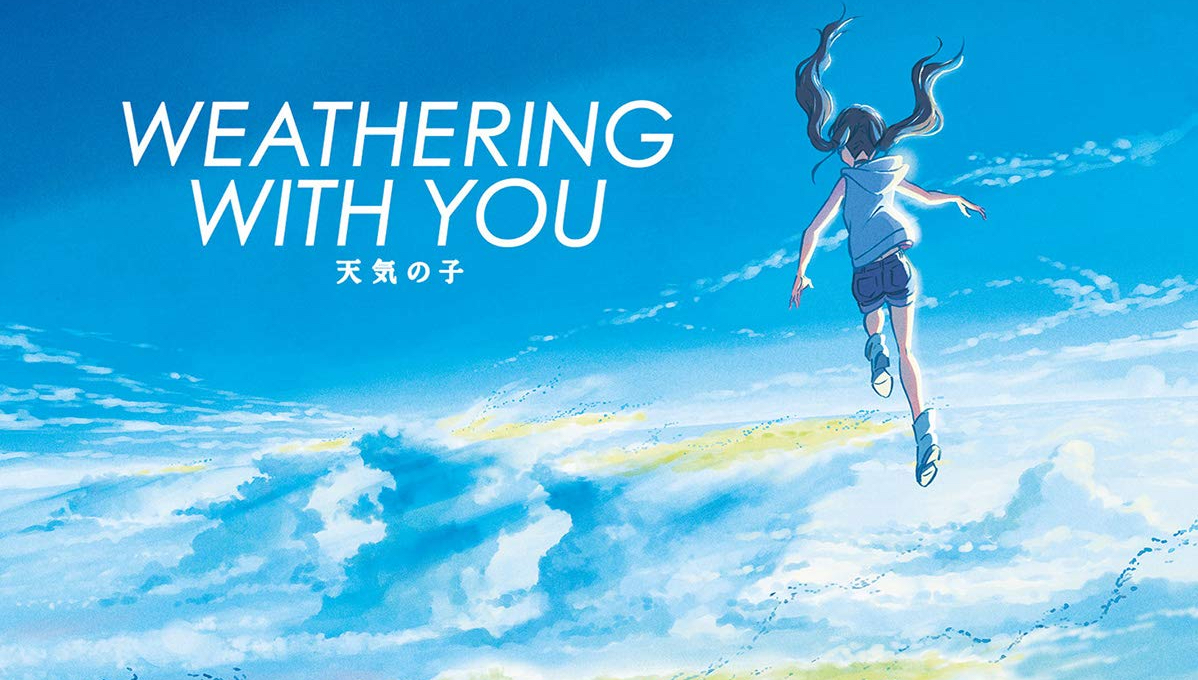 Weathering With You Writer/Director Makoto Shinkai’s follow up to his wildly successful Your Name gets the deluxe treatment by Shout Factory/GKIDS.  This Limited Collector’s Edition comes with UHD Disc, CD soundtrack, a book, and poster.

Makoto Shinkai with Weathering with You confirms that he is one of the premiere writer/directors working in the world today.  The film much like Your Name is a beautiful hybrid of multiple genres that defy your expectations at every turn.

Hodaka a High School freshman has run away from his small hometown to Tokyo.  Two chance encounters save his life.  Keisuke the editor of a Urban Legends magazine.  The other Hina a fellow high schooler and McDonald’s employee who gives him a burger.  Soon, Keisuke and Hina become a make-shift family for the young trouble teen as he gets his barings in Tokyo.  No sooner than he does that is it’s revealed the Hina is a Sunshine Girl.  A mythic figure who can will the sun out from the gloomiest of rainy days.  As Hina and Hodaka learn about her powers and the myths behind them larger forces seek to separate the two and seal Hina’s fate as a Sunshine girl.  A fate that could say Tokyo from being drown in water.

Weathering with You is a crowd-pleasing blockbuster because it deftly plays with conventions and the troupes of myth, love, and teenage runaways.  Every piece of storytelling in the script written by Shinkai is a recipe for a cliché eyeroll inducing moment of saccharine.  Every one of those moments adroitly fashions a different path, a more interesting and daring bit of storytelling.  Rather than having Keisuke tell child services where Hodaka is, he gives him a job and allows the teenager his freedom.  Wildly inappropriate?  Yes.  Biting with realism?  100%.

The world of Weathering with You isn’t one that’s a made-up fairy tale.  It is one where people make terrible choices.  Where there is as much apathy as there is sympathy.  By making the smart choices and the ones that have consequence, Shinkai creates a film where the magical and real comingle with great effect.  The film makes smart choices through its entire second half that will have most thinking that the film is over when it is just starting to get moving.

There is a sense of daring and implicit reckless youth throughout the film but not so more than the ending of the film.  Some will delight and revel in and others will be angered and frustrated by this unique ending.  Though one could never accuse Shinkai of pulling his punches.  In fact, Weathering with You has the director leaning into them.  Daring you to not only care about these complicated figures but actively rooting for them.  Rooting for them when their actions are recklessly selfish.

The 4K UHD Presentation is nothing short of astounding.  The image is reference quality.  Color, Contrast Levels, Image Sharpness are all perfectly rendered here.  There is not a frame of this film that isn’t perfectly realized without a speck of imperfection.  The work done on the HDR presentation is shocking, even when compared to Blu-Ray Edition (which is included here).  The image is sharper and the colors pop in 4K they do not on Blu.  Bravo to Shout/GKIDS for releasing this in UHD as it has paid massive dividends for fans of Shinkai’s work.  One can only hope that Shout/GKIDS will get a chance to release Shinkai’s other work with this kind of image quality.

Interview With Director Makoto Shinkai (11:14) – the director of Your Name discusses his origins and the origins of this project.  Shinkai relays anecdotes about the importance of a background animators, stealing TV animators from Studio Ghibli, how climate changed inspired both Your Name and Weathering with You, how time consuming animated the rain was, working with RADWIMPS (the Band scores the entire film), the connection to Your Name, how they strayed from the Mayazaki style, and much more.  Title Cards on the Screen are similar to prompts for questions.  The interview is intercut with various scenes from Shinkai’s other films and shorts along with other interview sources.

Exploring Makoto Shinkai’s Filmography (13:00) – the featurette is a compilation of trailers with a Text Screen introduction.  The introduction not only gives a plot synopsis but gives contextual information about the film and production itself and where it lines up in Shinkai’s filmography.  The films covered; Voices of Distant Star, The Place Promised in our Early Days, 5 Centimeters Per Second, Children who Chase Lost Voices from Deep Below, The Garden of Words, and Weathering with You.

Weather Front (24:08) – A TV Special from Japanese television covering various aspects of the film commemorating the release of the film around the world.  There is an interview done by director Shinaki with the bad RADWIMPS that discusses their involvement with the project. A backstage video that voice actor Nana Mori shot during the premiere of the film. An interview with the voice actors from Your Name.

Talk Show: Makoto Shinkai And Yumiko Udo (70:02) – The TV show hosted by Yumiko Udo is an interview with Makoto Shinkai that covers every aspect of making the film.  Udo appears to have had access to the filmmaker and the production giving us a glimpse at how the film was made.  The show begins with Shinkai and Udo sharing a beer and beginning to speak about the film.  It’s an interesting way to discuss the film and a look at the film from the director’s perspective.  The interview covers how Shinkai wrote a sci-fi version of the film, interest in making zeitgeist films rather than a film that will stand the test of time, how the amazing detailed backgrounds are made, how details begin during the storyboard process, how Shinkai works from home, the creation of certain characters, the decisions of characters in the film, a visit by the leader of the musical group RADWIMPS, and much more.

This 90-minute making-of documentary is a thorough account of the process to make Weathering with You.  The crew appears to have been given unfettered access to the production allowing for a great walk through something we rarely see, Production of an Anime feature.  From first audition of the voice actors, to cast and crew working with the director, to the animation process like compositing, background, temp work, 3D Modeling, Computer Assisted animation, to production meetings, to working on the Songs with RADWIMPS, to finally the promotional tour of the final film this documentary covers every strep.

Shout Factory/GKIDS have included the full 31-Track CD Soundtrack by RADWIMPS both the songs used in the film and the actual compositions.

Shout Factory/GKIDS have really outdone themselves giving Anime fans the deluxe edition of Weathering with You they deserve.  This 4K UHD comes with the HIGHEST POSSIBLE RECOMMENDATIONS!