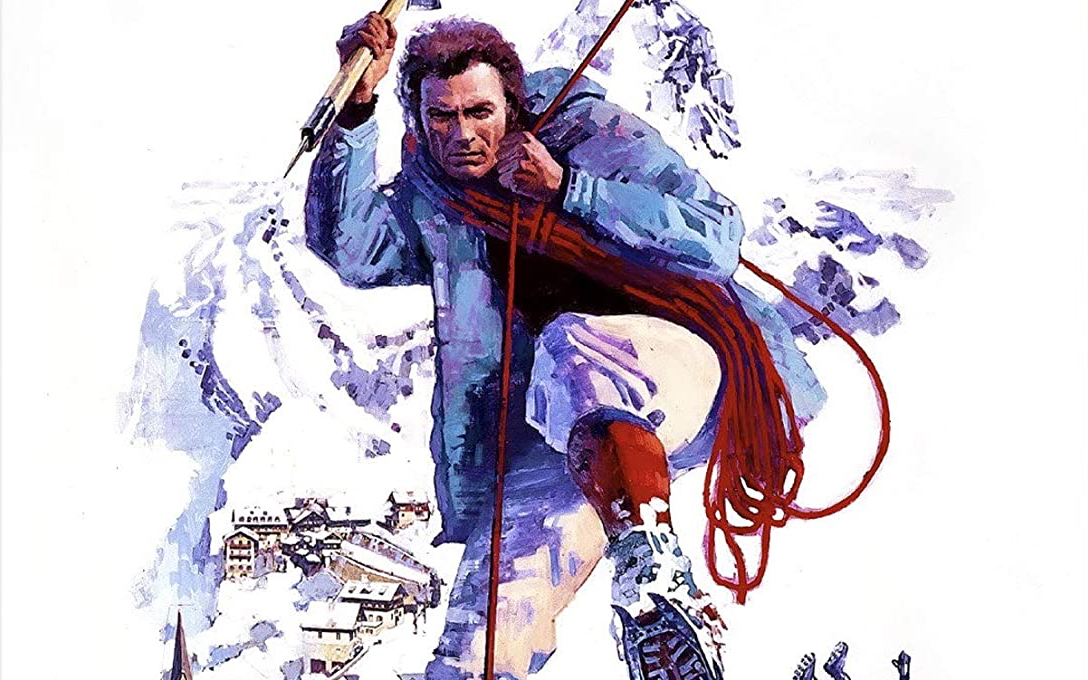 Before Cliffhanger (but well after German Mountain films) and Matt Damon as Jason Bourne, there was Eastwood’s The Eiger Sanction.  Kino Lorber’s KL Studio Classics Blu-Ray gives us a new 2K Master and a wealth of extras.

Much like Eastwood’s later Spy Thriller Firefox, The Eiger Sanction is front loaded with lots of plot before you get to the actual good stuff.  The good stuff being the Mountain Climbing.

Professor Hemlock (Eastwood) is your average Art Professor.  By Day he wows his college classes with his artfully dissection of art.  By night marvels over his Black-Market collection of rare Paints and Sculptures.  He financed his luxurious ill-gotten art by being a former government assassin.  So, we know it’s only a matter of time that Hemlock is pushed back into duty.  Which he is.  Two Targets.  One easily done.  Another that he’ll have to Sanction (a term for kill) atop the Swiss Eiger Mountain.

The Eiger Sanction spends the first 95-minutes of its 129-minute run time finally getting us to the mountain climbing. Eastwood slow rolls this one, filling the narrative with leisurely walks, bedding all the women in the film, and training montages.  Slow roll may not be accurate.  The Eiger Sanction feels like spinning wheels until the actual reason we’re here: Climbing the Damn Mountain.

Though, it should be noted that it’s a fascinating lead up to the actual climb.  Enlightening as Eastwood fashions himself as some sort of James Bondian type figure that’s at both anti-authoritarian and pro-government.  The first two thirds are filled with scenes of Hemlock/Eastwood wooing and bedding women.  If not bedding women or training in the Zion’s National Park for his climb, he’s being slightly racist, homophobic, or just generally a malcontent.

By the time the protracted third act does occur we are definitely not on board with Hemlock but are watching for the sheer spectacle.  This is where Eastwood and Company deliver a truly harrowing experience.  The climb looks every bit of death-defying as one would expect when filmed on the Swiss Alps.  The stunt crew should be commended for this truly amazing footage.  The scenes of daring climbs look dangerous because they were.  Unfortunately, one stunt climber actually lost his life during filming.

The ending is a confused bit of narrative hubaloo with a character coming forward as the assassin but the realization that Hemlock’s mission was all for naught.  If one looks too closely at the end of The Eiger Sanction, frustrations abound as everything was for nothing.  If one squints the patented Eastwood squint they will be able to overlook some truly baffling storytelling decision in the first two thirds to find a truly well executed adventure in the last third.

The Brand New 2K Master is nothing short of gorgeous.  The widescreen canvas vistas and framing, Eastwood and cinematographer Frank Stanley, implore throughout the movie are beautifully reproduced here.  The film looks sharp and color reproduction is stunning.  Many scenes are filmed in red light or low light or the harshness of outdoor light, nothing this transfer cannot handle.  Best of all KL’s transfer has a health amount of grain ensuring The Eiger Sanctionlooks like freshly struct 35mm archival film print and not DNR’ed to death Digital

The newly recorded audio commentary by Pinkerton does a great job of giving us production and critique of the film.  The film critic dissects what Eastwood and screenwriters brought to the adaptation and what was left out of the Best-Selling Novel, the novelist Trevanian (aka Rodney William Whitaker) and his writing, wither or not the material was satire, Eastwood’s approach to film, his politics that come into the film (and specifically this film), his persona throughout his career, how the production came together and the details of Eastwood’s Universal years and how they transitioned into his Warner Brothers years (which is where he’s been for the last forty-five plus years), George Kennedy and his late age career bloom, the other actors that worked on the film, John Williams score and what Eastwood thought of working with the Composer, the shoot moving from Northern California, Monument Valley, Zions National Park, Zurich, tragedy during the production, one of the most wildest facts being an actress that’s apart of Eurovision, snippets of the American Cinematographer article on the production, and much more.  Pinkerton’s commentary is very informative and highly entertaining as the man does give us context to what he feels like Eastwood’s approach is (a satire).

Frytag’s Ascent – An Interview with Actor Reiner Schöne (13:15) – a new interview with the actor who plays Frytag one of the mountain climbers in the last third of the film.  Beginning with part of the audition being that he had to perform like a professional mountain climber the actor’s discussion of the production is great.  Tidbits include the production searching for specialized shoes for him (he wears a size 15), Eastwood’s directorial style, nicknames during the production, just how difficult the production was, the fatal accident that occurred on set, and more.

Archival Interview with Actress Heidi Brühl (9:29) – This archival interview from the time of production performed by Pepe Ludmir (who hosted Charlas del Cine, which this interview appears to be from).  The German actress discusses her role in The Eiger Sanction, some of her personal life, and where she got her start.  The interview is in Spanish/English/Italian with Subtitles.

Vintage 8-Minute Promotional Reel (8:19) – is an EPK making-of featurette.  The piece put together during the time of release is a great old-fashioned look at the film itself.  Intercutting film footage is a slick and polished old school promo/extended trailer.  Though there is a sheen of cheese to the whole proceedings with an omnipresent voice over.  This reviewer’s favorite voice-over line is (Of Eastwood’s character) “Glamourous women move in and out of his orbit… he loves them frequently and well”.

The Eiger Sanction Radio Spots (2:45) – 5 Radio Spots play over a Production still from the film.

The Eiger Sanction TV Spots (2:16) – 4 TV Spots.  Anyone that loves vintage trailers are going to love these overheated TV Ads.

Rounding out the special features are trailers for The Eiger Sanction (2:45), Coogan’s Bluff (2:12), and Thunderbolt and Lightfoot (2:10)

The Eiger Sanction’s Blu-Ray from KL Studio Classics is filled to the mountain top with extra features. RECOMMENDED for the Eastwood fans!