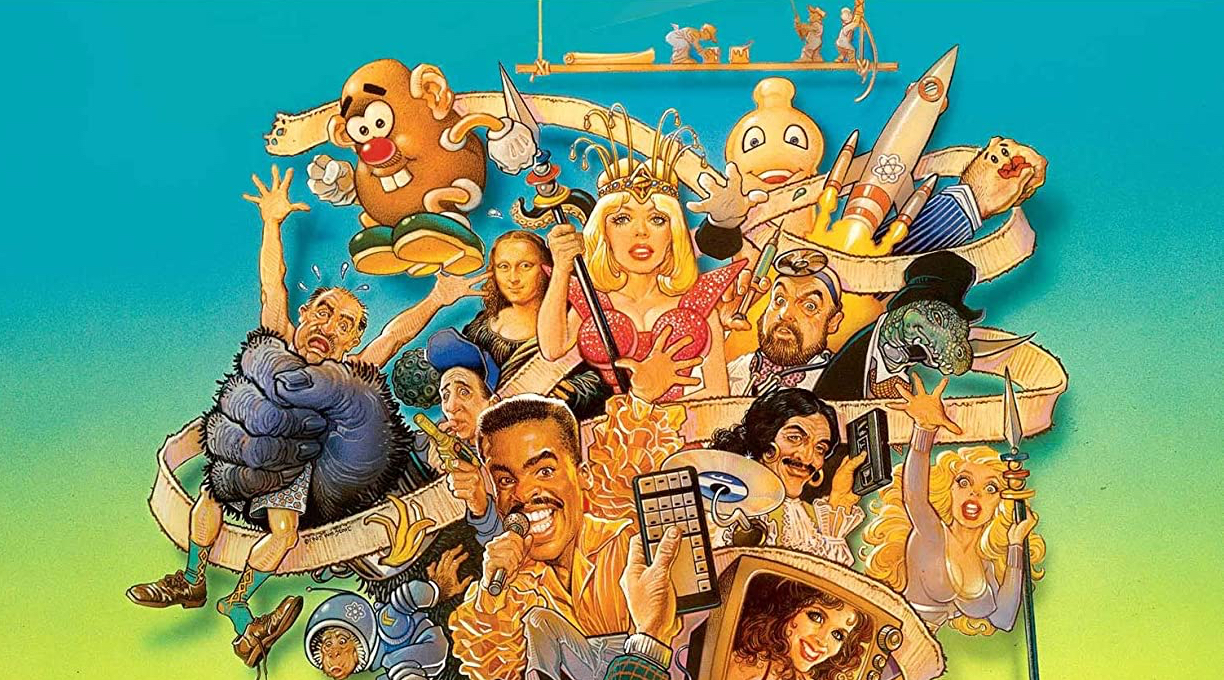 The Cult Comedy and almost Kentucky Fried Movie Sequel… Amazon Women on the Moon makes its Blu-Ray debut.  Thanks to Kino Lorber it’s filled with cheese… I mean special features you’ll go over the Moon for.

It has been since my childhood since I’ve seen Amazon Women on the Moon.  If I am honest, I wasn’t sure what to expect.  Revisits are always tricky things.  It turned out to be a great return as it was funnier than I remembered and of course, a lot of the humor is better this time around.

Truth be told, I had no idea that both John Landis and Joe Dante were involved with the project but it makes complete sense.  The funnier thing was that the segments I had expected Dante to direct he did not.  The ones that Landis directed I completely knew were his.  I am still shocked that the actual Amazon Women on the Moon segment was not directed by Dante as it feels completely his.  Or the Son of the Invisible Man not done by Landis or Dante.  It does not take away from these segments.  Directors Wiess and Gotlieb handle those respectively.

Part of an anthology like this is that some segments will not work, and others will but on the whole Amazon Women on the Moon works surprisingly well.  There is some tone-deaf stuff like Blacks without Soul which Landis shouldn’t have directed, even back in 1985.  Though Video Date was ahead of its time by twenty years with the advent of checking your prospective date via the internet (though here it’s a service that looks oddly like what someone would have described the internet like during the Victorian era).

It should be noted that the best segment is not even in the film rather a post-script mid-credit sequence.  Reckless Youth directed by Joe Dante and starring the indomitable Carrie Fisher is a play on the 30’s Dangers of … Exploitation films.  Dante and Fisher get the tone, pitch, and style of those films so perfect that it feels like it was released during that era.  It’s hilariously profane without being such.

Amazon Women on the Moon is the right mixture of 80s talent and comedic premises.  It’s not perfect but none of these types of films are, no matter what super fans of Kentucky Fried Movie say. With tempered expectations, it’s a blast.  Just remember…

THERE AIN’T NO THELMA HERE!

The transfer provided by Universal to Kino Lorber is top notch. There are a few minor scratches and blemishes but nothing that could be helped with other than a very costly and time-consuming restoration.  The color reproduction, image sharpness, and contrast levels are great.  All which leads to a pleasing image, better than the film has ever looked in any home video iteration.

The newly recorded audio commentary by Ellinger and McPadden is informative and entertaining.  The two talk continuously about the film’s history, their history with the movie, explaination of some of the cultural references (Ellinger, who’s British asks McPadden a few times for context), the casting and production, the legacy of the film, and much more.  The two bring a lively discussion about the film, making sure to bring up even some critiques of the film, which makes for a great commentary track and well worth a listen.

Bullshit or Not: The True Story of Amazon Women on the Moon – is an all-new 24-minute making of featurette with Directors John Landis, Joe Dante, co-editor Marshall Harvey, casting director Julie Selzer and more.  The featurette is as funny as the film with many of the participants contradict one another often times leading to some great unintentional comedic moments, primarily by Dante and Landis.  The featurette goes over, with great honesty, how the film was developed, produced, released (or the lack of one), and eventually its cult status from its rotation on Cable and the VHS market.

Reckless Youth Dailies (11:46) – VHS copy of specific dailies for the Dante Directed segment that comes midway through credit sequence.  The dailies show alternate takes from the short and also a few flubs.

Roast Your Loved One: Rip Taylor Deleted Act (4:09) – a VHS rip of the original footage put together by Joe Dante.  If you love Taylor, you’ll love this artifact.  Hearing Dante trying to direct Taylor is as much fun as the act itself.  Most of the Jokes are not related the film segment.  It’s great they have this footage someplace for historical purposes.

Roast Your Loved One: Jackie Vernon Deleted Act (3:47) – a VHS rip of the original footage put together by Joe Dante.  If you love Vernon, you’ll love this artifact.  One thing of note, Vernon has a “slide show” that you do not see.  It’s great they have this footage someplace for historical purposes.

Roast Your Loved One: Henny Youngman Full Act (4:57) – a VHS rip of the original footage put together by Joe Dante.  If you love Youngman and his deadpan delivery and his specific oft-told jokes, you’ll love this artifact.  It’s great they have this footage someplace for historical purposes.

Original Opening (1:05) – This opening recalls the Sci-Fi films of the 1950s where to lend “creditability” to their “science” they’d have a “Scientist” introduce the movie.

Unknown Solider (8:55) – directed by Peter Horton, this military satire may have been too intelligent for the crass and bawdy Amazon Women on the Moon.  The film is much more in line with something like Dr. Strangelove than anything broad.  Starring Robert Loggia, Bernie Casey, and Ronnie Cox as Military Officers trying to convince a Private to “take one for the team” is as good a short film that’s been produced.  Horton’s direction is on target as are the trifecta of amazing actors.  It is just unfortunately that Horton’s work went unseen until the original DVD release.

Roast Your Loved One (2:35) – an additional scene directed by Joe Dante.  It’s an alternate introduction of the Celebrity Roast of Harvey.  Look quick to see a very young Bryan Cranston.

The French Vantriquilist’s Dummy (4:20) – directed by Joe Dante and starring the late-great Dick Miller as a Vantriqulist who’s Dummy gets mixed up at the airport for a French Dummy.  Hijinks ensue.

Amazon Women on the Moon (0:48) – directed by Robert Wiess a small moment between Sybill Danning and

Peter Pan Theater (1:30) – directed by Carl Gottlieb does an Ad for a new Anthony & Cleopatra.  If you see the title you’ll know what the joke is.

Kino Lorber’s special edition of Amazon Women on the Moon is a definite RECOMMENDED!