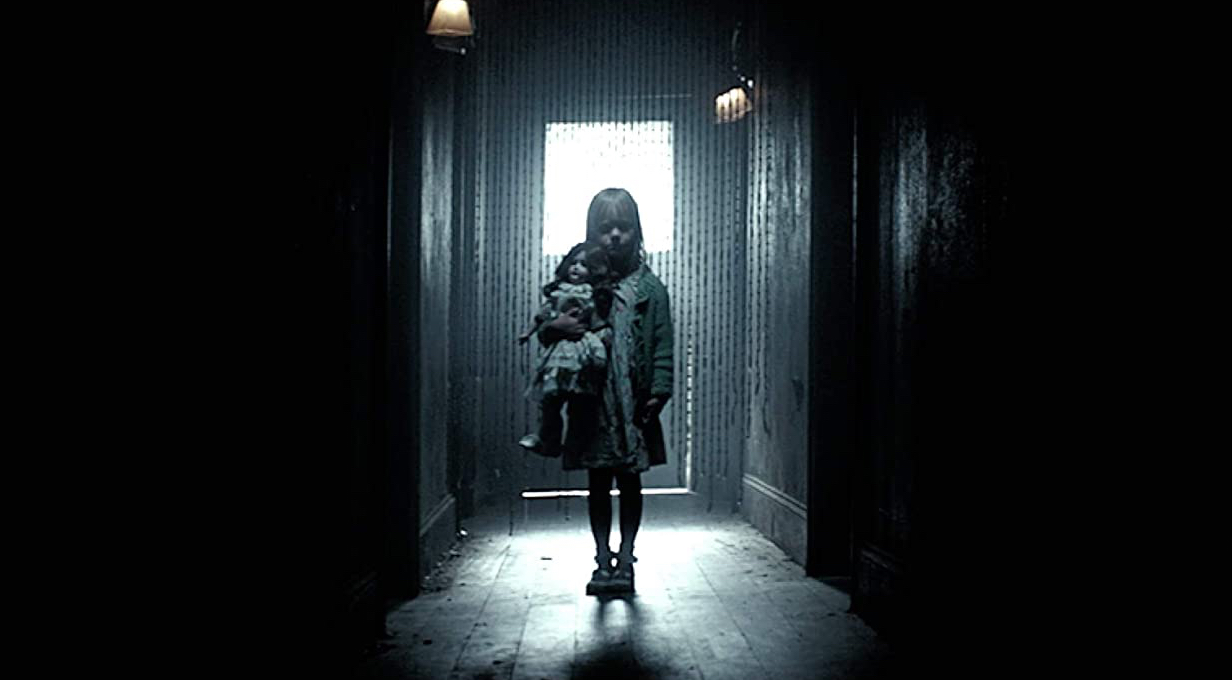 The Veil is one of the many forgotten Blumhouse films that went straight to streaming.  Kino Lorber has wisely released this effectively creepy film on Blu-Ray via KL Studio Classics with some great extras.

Phil Joanou’s effective horror mystery is subtle in its scares and story of a Jim Jones-like cult-leader, a great Thomas Jane.  The Veil may not be your Blumhouse film but it’s bound to make a lot of fans.

A charismatic leader (Jane) of a cult leads his followers to their death right before an FBI raid leaving a single survivor.  30-years later a documentary crew begin to investigate the death cult and its lone survivor (Lily Rabe).  The crew heads to the site of the compound with the director (Jessica Alba) hoping to find answers for more than just why.  As the film crew begins to realize they are not alone strange mysterious supernatural occurrences make them realize there is more going on that at first appeared.

Much of the effectiveness of the film comes from Thomas Jane’s performance as Jim Jacobs the enigmatic Cult Leader that is the central figure of the film.  He is the boogeyman of the piece.  Jane is as magnetic as ever, creating a figure that’s part Charlie Manson and part David Koresh and a little but not a lot like Jim Jones (the person that it’s based on). Even when Jane is not on screen the film seems to pull towards his character and the death of his followers.

There is a formula to what Blumhouse does and I can easily see why this wasn’t a tentpole release from them.  That said, The Veil is a highly effective creeper of a film.  A slow burn that in today’s era of overstimulation that may not work for younger audiences.  Rather than centralize around the scares and a slasher the film is a mystery.  The mystery of a cult leader and his followers.  Joanou does a great job of building this mystery and suspense until the final act.  The Veil may not have been Blumhouse formula but it’s definitely worth diving into.

The film has been transferred beautifully to Blu-Ray.  The transfer does a great job of moving between multiple image types (16mm, Digital, Faux-16mm Digital, Cannon D5) giving it an image that’s sharp, consistent, and pleasing to the eye.

The new commentary by Joanou is aces.  The director wastes no time in beginning to discuss just about everything that took place during the production.  This includes and not limited to the shift from a “Found Footage” film to a traditional Horror film, working within Blumhouse machine, the technical details regarding shooting with different cameras (both digital and traditional film), working with the various actors (including some great comments about Thomas Jane), a State of Grace connection (one of this reviews favorite films), his shooting with wide-angle lenses and how that affected the film (eg making it a one-camera shoot which is very different for a Blumhouse production), working with practical FX work, Jump Scares, not being able to do additional photography, how it did not work as a horror film, discussion of what went wrong from his perspective, not being able to film 15% to 20% of the script, how much of the VFX he did with After Effects (you’ll be surprised when he discusses it), the ending and how it was formed, and much more.  Joanou is very honest about the production during this track about the difficulties of making the film even with the problems.  It’s a great track.

Interview with Co-Star Thomas Jane and Director Phil Joanou (19:00) – the newly recorded interview with the Actor and Director.  Starting how they first met over a different project years prior written by David Peoples both Jane and Joanou are right at home with one another.  The two recount the production, the script, changing from found footage to traditional horror, the work that Jane did to change his character, Jim Jones, some great back and forth about the rushed production, how Blumhouse releasing worked, and how it went straight to Netflix, and more.  I cannot stress how much fun this interview is with Jane and Joanou having a great time talking.

KL Studio Classics brings The Veil, a smart horror film into the spotlight with a great edition featuring some solid extras.  Recommended.