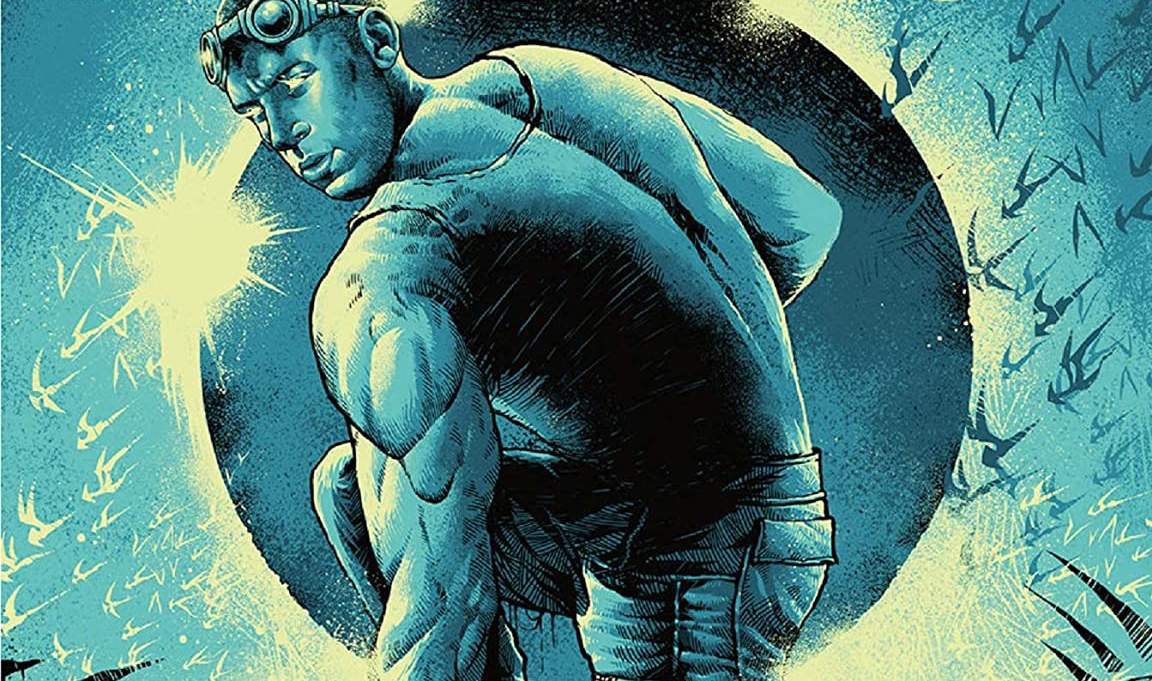 Arrow Video releases one of the best home video editions of the year with the UHD 4K Disc release of Pitch Black. Armed with a beautiful new 4K restoration and a wealth of extras.

Note: All features are on the Blu-Ray Release as well.

What many people forget is just how great a film that Pitch Black is.  What the film lacks in budget more than makes up in storytelling and characters.  David Twohy’s film isn’t just Vin Diesel’s star-making performance.  It’s his best film.

Deep in the backwaters shipping lanes of intergalactic space travel, the Hunter-Gratzner is put in front of a rogue comet causing the ship to crash on an unknown planet.  The survivors; Caroline Fry (Radha Mitchell) the pilot, a Holy man on his way to New Mecca (Keith David) with a few of his charges, Two Settlers (Claudia Black), an Antiquities Dealer, An orphan boy named Jack (Rhianna Griffiths), Johns – a Cop (Cole Hauser), and the convict he is taking in Richard B. Riddick (Diesel).  As they attempt to scavenge what is left from the flight, they find themselves in the most inhospitable of planets.  With Riddick, a known killer, with a propensity for escaping, they find a killer amongst them.  Riddick is not the most dangerous entity on the planet.  With an eclipse that will last a millennium, they are on a race against time having to make an unsteady pact with Riddick if they’re to survive this planet and its inhabitants.

Pitch Black is both sci-fi, western, horror survival, and oddly social commentary all rolled into one.  The adroit script written by Jim and Ken Wheat along with Twohy makes all the right decisions when world and character building.  Riddick is the wild card in this group of archetypes and the way that he plays off of each of the characters is what elevates the film from your standard “aliens vs humans” genre piece.

Twohy as a director and co-writer plays the long game and knowing we will be invested in Riddick as we’re unsure if he’s friend or foe.  Through the entire piece, Riddick is the film’s greatest source of tension; will Riddick or has Riddick killed someone in the group.  The way that how that dynamic plays out between the various characters but specifically Johns, Fry, and Riddick is a small morality play is Pitch Black’s most noteworthy feature.

Much has been said and criticized about Vin Diesel in the two decades since Pitch Black but one thing remains true; his performance as Richard B. Riddick stands as one of the great star-making performances.  Like Stallone’s Rocky or Schwarzenegger’s Conan… Diesel’s Riddick stands as a singular character that defined the actor.  The look, the voice, the dialog… it is uniquely Diesel.  Twohy completely understood that he had written the character, but Diesel was/is the character.  So much so, that other characters who normally are the leads, like Mitchell’s Caroline take a backseat.

One cannot help but note that Pitch Black at its end and the surviving members of the ordeal is are anything but standard issue.  No spoilers here, even for a twenty-year-old film.  In fact, the film may have greater appeal two-decades later because of this kind of progressive thoughts from the writers, director, and more than likely Diesel. Who was notorious for pushing productions to do more much to the chagrin of Executives.  The result is that Pitch Black still remains vibrant and fresh as the day it was released.

The brand new 4K restoration by Arrow Films of the Theatrical and Director’s Cuts of the film, approved by director David Twohy along with the Dolby Vision (HDR10 compatible) picture is nothing short of miraculous.  The Dolby Vision should be noted is good but comparisons with the HDR10, the preference will definitely side with the HDR10 picture.  The colors pop a little bit more with the HDR10.  Though the contrast on the Dolby Vision is far greater.  So much so, one will want to watch this in a very low light situation to truly appreciate the picture.  Comparisons to the older Blu-Ray release are night and day difference with the Sharpness, Contrast, Color, and Grain Structure all getting a huge boost in the UHD Disc.  Bravo to Arrow Video for doing an amazing job.

The archival commentary between director Twohy and stars Diesel and Hauser is okay.  Much of the run time is spent with the guys, specifically Diesel and Hauser, joking around and making references to inside joke and reference.  Ported over from the original DVD release.

The second archival commentary featuring director Twohy and producer Tom Engelman and visual effects supervisor Peter Chiang is the one you’ll want to listen to.  The three gentlemen discuss the nuts and bolts of making the film and bringing this lower budget sci-fi film to the screen.  All three men are quite proud of their work and should be.  Also ported over from the DVD release.

Nightfall: The Making of Pitch Black a newly filmed 24-minute interview with the director. Beginning with how he started his directorial career that leads him to Pitch Black (originally called Night Fall). Director Twohy discusses how he created the character, Riddick. Great tidbits include a certain A-Lister that was almost cast (and the story behind it), how Vin Diesel came to be cast, where they filmed and the great story about the movie theater with a specific sign that warned them about not bringing “something in”, the fight for bleach bypass on their original 35mm negative, getting behind schedule, what was filmed on location and what was stage-bound, and much more. They cut in scenes, script segments, photos, and b-roll behind-the-scenes footage making it a hybrid/making-of.

Black Box: Jackie’s Journey is a newly recorded 12-minute audio interview with Rhiana Griffith who played jack. Beginning with modeling that lead to acting and casting in Pitch Black. She discusses how the character evolves from being named Audrey to hiding her genre as a character named Jack, working on her American accent, working with the other actors, working with Vin Diesel, and much more. The interview is an audio recording they’ve added scenes, script segments, photos, and b-roll behind-the-scenes footage for visuals making it almost a micro commentary.

Black Box: Shazza’s Last Stand is a newly recorded 7-minute audio interview with Claudia Black who played Shazza. Beginning with her auditioning for the lead role and how that got her the role of Shazza. Interesting tidbits include a negotiation over her hair because of her role in Farscape, working in the sci-fi genre, the cold weather in the desert, and how that effected shooting, the difference between Australian productions and this production, and more. The interview is an audio recording they’ve added scenes, script segments, photos, and b-roll behind-the-scenes footage for visuals making it almost a micro commentary.

Black Box: Bleach Bypassed is a newly recorded 10-minute audio interview with David Eggby the cinematographer. Beginning with how Eggby met Twohy on the 80s cult classic Warlock Eggby discusses the visual look of the film. Tidbits include the technical details of bleach bypass, how unique it is to do this to the negative, the work on stage, and more. The interview is an audio recording they’ve added scenes, script segments, photos, and b-roll behind-the-scenes footage for visuals making it almost a micro commentary.

Black Box: Cryo-Locked is a newly recorded 13-minute audio interview with the special effects supervisor Peter Chiang. Chiang begins with how Star Wars inspired him to go into FX work. Discussion points include the design work and how it translates to the VFX work, how the production effected the VFX work, shooting color tests to help the production determine what was best for the bleach bypass, and more. The interview is an audio recording they’ve added scenes, some great preproduction designs/sketches, photos, and b-roll behind-the-scenes footage for visuals making it almost a micro commentary.

Black Box: Primal Sounds is a newly recorded 11-minute audio interview with composer Graeme Revell. Talking about the wild route he took to get to composing (that included work in a mental Asylum). Revell’s discussion includes how he started composing through music, how he came late into the production of Pitch Black, his low-fi, and sampling approach helped to the sound of the score and notes from Twohy, and much more. The interview is an audio recording they’ve added scenes, some great preproduction designs/sketches, photos, and b-roll behind-the-scenes footage for visuals making it almost a micro commentary.

Making of Pitch Black is a 5-minute archival making-of from the original release. It’s more of an EPK with some great b-roll footage. It’s so old it introduces Vin Diesel last.

Behind the Scenes – ported over from the original Blu-Ray release it was originally a PiP feature that shows you cast and crew interviews and b-roll behind-the-scenes footage. The great thing is that they’ve not made it on the film but rather it’s the whole 18-minutes of footage combined.

Pitch Black Raw – ported over from the original Blu-Ray release it was originally a PiP feature that shows you preproduction footage, raw footage, VFX progression, and a lot more. This 12-minutes of footage is scored to Graeme Revell’s score.

Note: Amazingly, this is why one LOVES Arrow Video they have included Dark Fury in 4K!!! Yes, it has been uprezed and maybe even native 4K. A very nice touch by the label.

The Trailer Gallery includes no less that 6 trailers. The trailer’s quality Baruch but none are terrible.

Arrow Video’s Pitch Black is a contender for one of the best Catalog titles of the year.  Arrow has gone the extra mile by placing all the bonus content on the UHD Disc.  Let this just be a preview of the standard that other Boutique labels will follow. HIGHEST POSSIBLE RECOMMENDATIONS!!!!