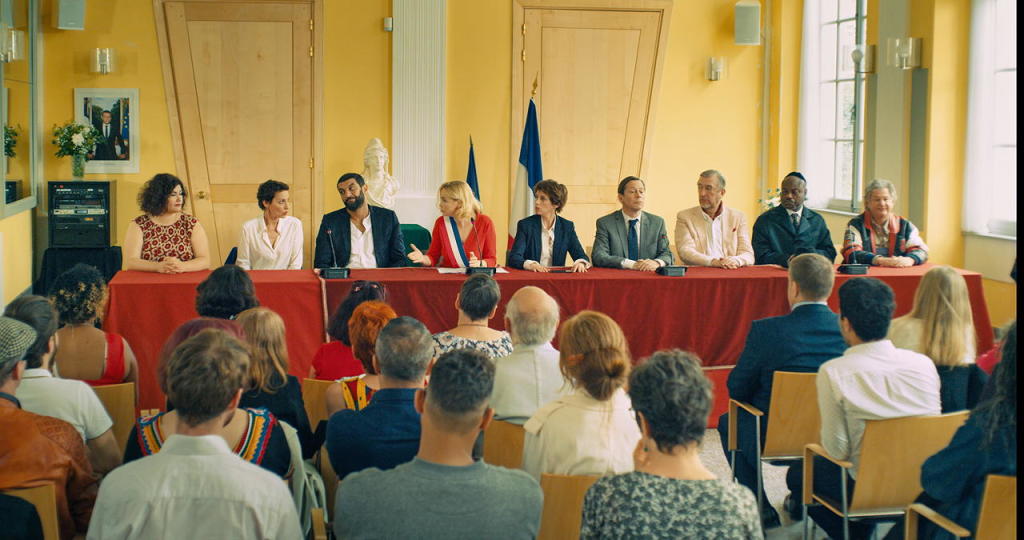 Eclectic French humour, quirky romance and chaotic satire collide in Jeanne Balibar’s Wonders in the Suburbs, which features some of France’s top actors.

Acclaimed French actress Jeanne Balibar not only stars in Wonders in the Suburbs (Merveilles à Montfermeil), but also writes and directs a bizarre re-romance of a divorcing couple unwittingly falling in love with each other online, played against a not-so backgrounded environment of a chaotic farce of local political ambition. There’s an awful lot going on; the newly-elected council won on a manifesto of creating a local school for 67 languages, crops on the rooftops, naps for all, the harmonisation of human breathing, and a raft of new ‘days’ – Kilt Day and Brioche Day among them.

Utilising a cast of highly-regarded French actors (including Mathieu Amalric, Emmanuelle Béart and Ramzy Bedia), Balibar has assembled a collection of caricatures and eccentrics to inhabit her story, all members of the newly-elected municipal council. The stand-out performance is probably Béart, playing a slightly unhinged Madame Mayor gradually realising that things are getting out of her control – her stairwell melt-down is a definite highlight. Ramzy Bedia exudes everyman-style charm as Kamel, the divorced husband, and the only one who appears to be operating on standard parameters.

To be kind to Wonders in the Suburbs, it probably plays significantly better to those who have some knowledge of the workings of French (and particularly Parisian) municipal councils. For those of use less acquainted, much of the satire is unfortunately lost. Its humour is also something of an individual taste; if you enjoy chaotic French humour then it’s highly likely that you will enjoy this more.

Wonders in the Suburbs is now playing via the Kino Marquee platform in NY’s Symphony Space Virtual Cinema, and opens on 21st August in LA’s Laemmle Virtual Cinema. It is also currently available on Mubi in the UK.