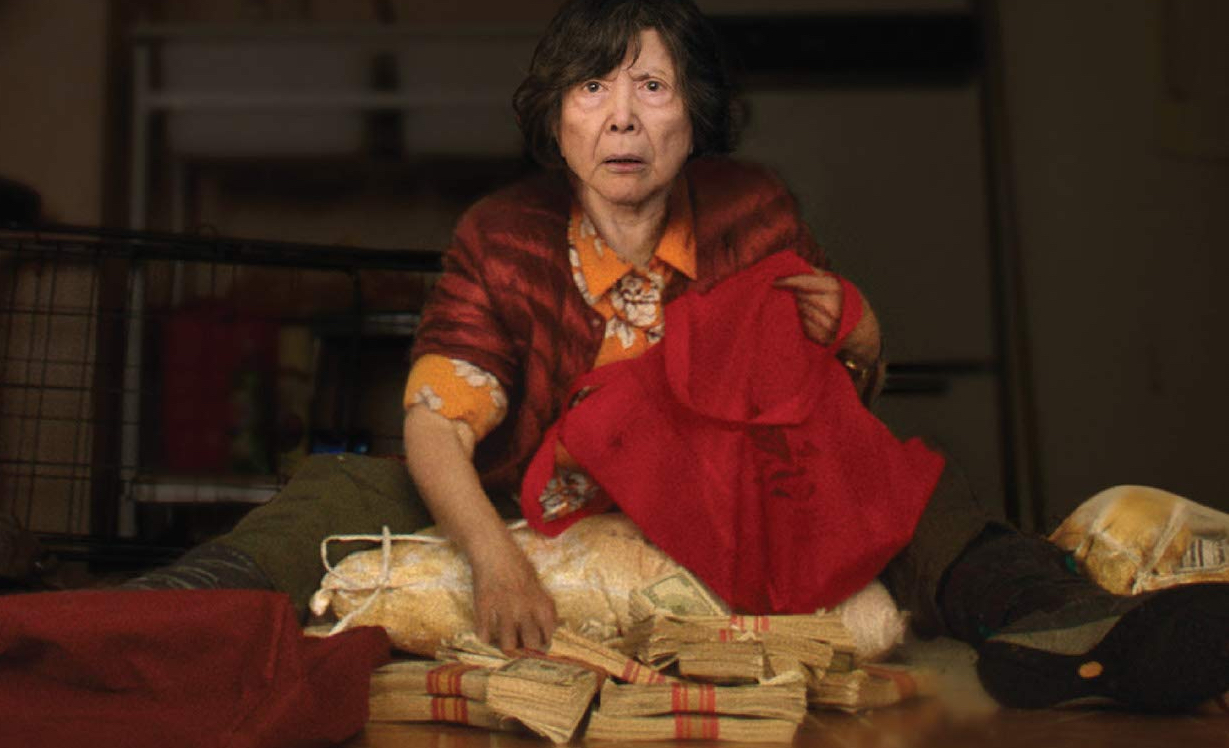 Step aside John Wick there’s a new badass in town.  Her name is Nainai (Mandarin for Grandma) Wong.  Lucky Grandma one of the delights and genuine surprises of 2020 makes its home video debut courtesy of Kino Lorber.

The delight in watching Lucky Grandma is how Sasie Sealy’s film challenges your expectations of what an 80-year-old Grandma is capable of.  The results turn into one of the surprising and effective films of 2020.

Nainai Wong (Tsai Chin) is told by her fortune teller that on October 28th her luck is going to be huge.  As it stands her luck isn’t the best; recently widowed, living in a small apartment by herself, her son wanting her to move into his house.  With nothing left to lose Nainai empties her bank account and heads with a tourist bus to Atlantic City.  Her luck does change but maybe not in the middle.  With a simple act, she has put herself in the middle of a Chinese Gang War.  Crafty and very capable can Grandma get out of it unscathed.

Tsai Chin is a revelation as Nainai Wong.  Tough as nails, smart as a whip, a determined she seen on screen.  Writers Sealy and Angela Chen create a complex woman beyond just some sort of action cliché. Grandma does not wield a weapon but rather uses her smarts to find her way out of situations that are straight out of a Johnny To film.  Part of the delight of the role is how Chin plays Grandma with a mixture of moxie and an I don’t give a fuck attitude that if anyone that has had an Asian Grandmother will know is more accurate than you could ever imagine.

Lucky Grandma is sure to gain a following with its adroit use of conventions from action and gangster films.  More than just a fun exercise in genre, when the film makes its third act turn, it goes effectively for an emotionally resonant ending.  What makes Lucky Grandma special is that it lands that turn and earns every bit of emotional payout.

Lucky Grandma comes armed with a beautiful transfer.  The digitally shot film looks amazing on Blu-Ray.  The film taking place in the low-light neon-soaked corners of New York City’s Chinatown is filled with colors that pop that could have been an issue. The transfer has no problems with handling any of the darker high contrast scenes and color reproduction.  Kino Lorber has given us a sharp transfer.

Behind the Scenes Featurettes

Asian Influence (5:12) Discusses the development of the story and how they found the funding for this unique film.

Why is this Important? (1:52) A promo from AT&T (that funded the film) and how the film came to be and how representation is important.

Unfiltered with Tsai Chin (3:15) Another Promo from AT&T that focuses on the very charming and as they say “unfiltered” Tsai Chin.  She discusses how she became an actor and how she came involved with the film.

Meet the Characters (2:32) Another Promo from AT&T that introduces each of the characters in the film.

Tribecca Premiere (1:32) Another Promo from AT&T this one featuring the Premiere at the 2019 Tribecca Film Festival.

Supporting Underrepresented Stories (1:30) Another Promo from AT&T that discusses how the Program “Untold Stories” from the company that grants one winner $1 million budget to produce their film.

Women in Film (2:22) Another Promo from AT&T that focuses on how Untold Stories help women in film.

Rounding out the special features is the theatrical trailer (1:43)