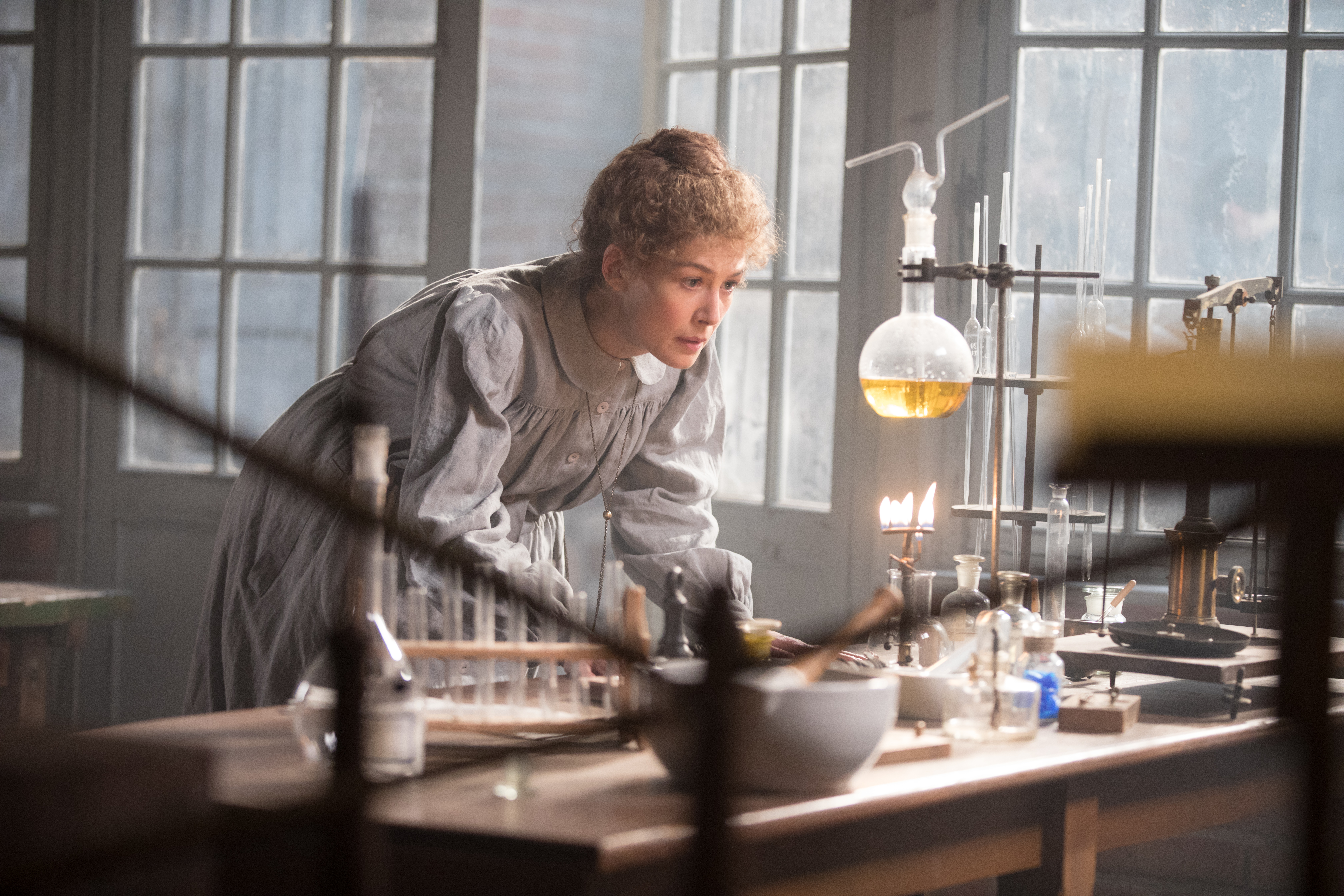 Cineastes had to wait 5-years for Marjane Satrapi’s follow up to The Voices.  Radioactive gives us a visually arresting albeit straightforward biopic.

Radioactive is the newest film from director Marjane Satrapi.  Like the director’s previous work, the Rosemund Pike starring biopic is as visually inventive as anything you will see in 2020.  You must forgive its script that is almost breaks the film entirely. Almost.

The life and time of Maria Skłodowska-Curie aka Marie Curie the two-time Nobel prize-winning Scientist is enough to fill a dozen movies.  Her work with Uranium and its radioactive set in motion most of the best and the worst of the science and invention of the 20th Century.  The film focuses on Curie’s (Rosemund Pike) relationship with her husband (Sam Riley) and the eventual fallout from society’s favor only to do some of her most renown work.

As a visual entity the film is a marvel. Satrapi’s inventiveness as a director has only gotten more refine with every passing film.  Radioactive builds an early 20th Century Paris that is filled with wonderous lights, sights, and sounds.  Working with cinematographer Anthony Dodd Mandel, the camera is always in search, like Curie, for the wonders of the world.

The film is at its best when Curie is either working or discussing the effects of her discoveries.  Satrapi intercutting both discovery and its application later in the Century is one of the best pieces of direction this year.  These setups and payoffs of the causality of Curie’s science are so elegantly and emotionally direct that one wishes that Satarpi had a better script that focused more on these motifs and story elements.

Rosemund Pike’s work matches Satrapi’s ounce for ounce.  The actor gives a complex portrait of Curie.  A woman who even in our modern times is a staggering powerful figure.  Pike excels at playing these types of roles supposed difficult women who know exactly what they want and are held back by the men they are entangled with.  Even in the most troubling parts of the script (there are quite a few), Pike rises above them to create a part that is always magnetic and engaging.

Jack Thorne’s adaptation of Lauren Redniss’s novel is what hobbles the film.  Thorne’s script makes Curie’s life some sort of love story. A love story that weakens who Curie was.  Someone who is and always will be more fascinating than her husband, and her lover, ever was.  But Thorne’s script by making the emotional component about the two men Curie has a relationship with completely cuts its main character agency to nothing.  Thorne’s script is an insult to Curie the scientist and her struggle in the field dominated by men, including her husband who took her rightful credit.

Radioactive pushes beyond its script’s shortcomings to be one of the better films of 2020.  Leave the script but take Pike’s superlative performance and Satrapi’s creative direction.