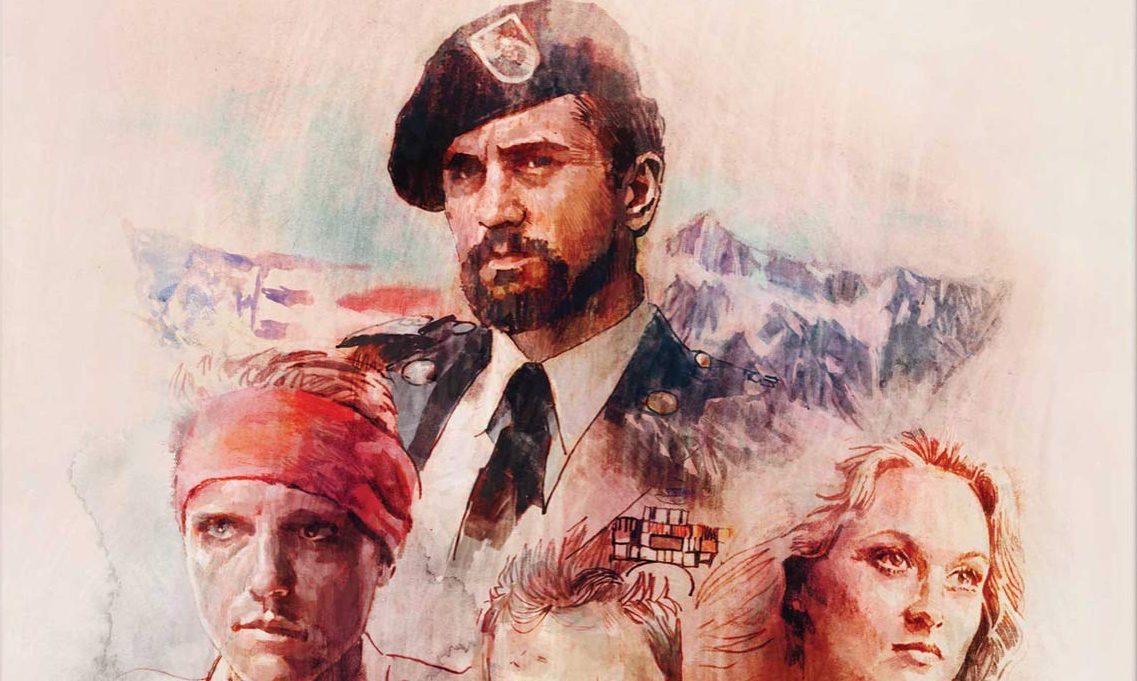 It cannot be understated, The Deer Hunter is one of the last great films of the 1970s.  Michael Cimino’s drama is as beautiful as it is horrifying.  A film as much about how men change because of war as it is about how we try to heal ourselves and others.  The unconventionally told tale of friends who go off to war the day after one of their weddings.  Cimino explores the machismo amongst men and the cost of that when faced with unsurmountable violence.

Michael (Robert DeNiro), Nick (Christopher Walken), and Steven (Jon Savage) are Pittsburg Steelworkers who have enlisted to go to Vietnam.  They leave behind Nick (John Cazale), John (George Dzundza), Axel (Chuck Aspegren), and Linda (Meryl Streep).  Michael talks of heroics and manhood in an ineffable way that beleaguers and entices Nick and Steven.  Michael thinks of himself as a man out of time, as though he missed his calling by 200 years, a Colonial Western Expansionist and Pelt Hunter.  He and his friends are tested in the most horrific of ways, ways that even test Michael as they’re captured in Vietnam.

Michael and Steven come home both broken in very different ways, leaving Nick, who they think is dead.  The men come back to a modern world that has not changed but they have.  Michael having seen real violence and the courage it took to do the most inhumane things is sickened by his friend’s flippant drunken behavior.  It his attempts to “save” Steven that leads him back to Nick and Vietnam.

Cimino’s film is one of unique grandeur.  Like a Tolstoy novel, one does not enter the 185-minute film lightly.  This is not something you inactively watch.  This is a film that envelopes you.  It upsets you.  It makes you hate it as much as you love the characters you meet.  The Deer Hunter cannot be simply classified as a drama, or a war film, or an anti-war film, or a film of brotherhood, or a tragedy.  The Deer Hunter is all those things and none of those things.  Cimino’s understanding of the human condition in all its shades, light and dark, good and evil are on display here.

There is no “badassery” in his film.  There is no epic war action scene.  Cimino makes sure that the Vietnam scenes are a horror film.  Every moment is a shot of adrenaline that comes from an act of violence so repulsive you want to look away.  The power in the film is how Cimino may hate the violence but he has made you care so deeply for Michael, Nick, and Steven that you want to ensure their safe return.  Safe being a relative term.  No one survives The Deer Hunter unscathed.

The irony of the final song being God Bless America, is that Cimino both loves his country and is sickened by its actions. The director loves the people of his country but is incensed they were shattered by a war that their government sold them.   The Deer Hunter is one of the greatest American films because it scars you. It cares noting about grand gestures or ideals like heroism or patriotism.

The Deer Hunter is a great American Film because it cares about the people they are showing being torn asunder by the country they love so dearly.  Few films of the any era can say that, especially dealing with the subject of war.

The new 4K Transfer is as stunning as The Deer Hunter has ever looked.  Sharp in the way that a 35mm print is.  The film looks like a freshly minted archival print shown at your favorite repertory theater.  The grain structure on the UHD disc is nothing short of astounding.  The Contrast levels and Color Grading from the Dolby Vision and HRD10 (both which I tested on my Sony 4K capable Monitor). The Blu-Ray is an entirely different experience with a little less sharp and not as beautiful as a grain structure.  All that said it’s a wonderful Blu-Ray that fans will be delighted to experience.

One thing of note, you may have adjust your monitor’s brightness as the image is a bit dark (I adjusted by two notches and it was perfect). I am unsure if this is an affectation of the Disc or my Sony 4K Monitor. For reference, I have a Sony XBR Z9D.

Audio Commentary with Cinematographer Vilmos Zsigmond and Journalist Bob Fisher which appears on both the UHD disc and the Blu-Ray.  The commentary is fabulous with the late Zsigmond discussing the filming, working with Cimino, the style, the acting, and just about everything you could possibly want.  The one minor issue is that they have not included the Cimino Commentary that has appeared on the UHD Disc from Europe and European DVD releases.  This commentary is as great and not to take anything away from this

We Don’t Belong Here – is an all-new 8-minute Interview with actor John Savage.  Savage discusses his origins as a theater actor in New York which paved the way to seeing Cimino and DeNiro and casting in The Deer Hunter.  Savage discusses his role as Stephen and working with Michael Cimino. The actor does definitely discuss the infamous Roulette scene in detail, the personal reaction his father had, and more are discussed in this very personal interview.  An onscreen title card prompts the questions Savage discusses.

The War At Home – is an all-new 11-minute Interview with actress Rutanya Alda.  Alda who played Angela, Stephen’s (Savage) wife, quickly discusses how she was cast and immediately flown off to Pittsburgh. Alda discusses how Cimino basically locked up the cast in a hotel in order to make them bond, filming the lengthy Wedding scene, working with Cimino as a director, and much more.  An onscreen title card prompts the questions Alda discusses.

A National Anthem – is an all-new 14-minute Interview with Producer Michael Deeley.  The producer discusses how he got the script originally titled “The Men Who Came to Play” and attempted to find the budget for the script. All of the studios turned him down because the film dealt with Vietnam something they felt audiences did not want to see. It was only after EMI purchased Deeley’s company that he got the budget.  It was Cimino who was brought on board to do scripting and it was only after that work that Cimino got the job.  The budget overruns, how the first act was formed, a joke about Cimino’s ego about the length and comparing of a specific “classic film”, Robert DeNiro’s casting and his acting process, Meryl Streep’s casting,  the production in the jungle, the release, the Best Picture win are all discussed in the interview.  An onscreen title card prompts the questions Deeley discusses.

This Is Not About War – an all-new 13-minute Interview with Post-Production Supervisor Katy Haber And Universal Marketing Executive Willette Klausner.  The two discuss their very different origins in the industry, one worked as a Model before going into Marketing and Advertising and the other working with Sam Peckinpah as an assistant Editor.  The two filmed together discuss their respective work on The Deer Hunter.  It’s a fascinating look at positions often not discussed on-camera, the “Shitkicker” story Klausner is hilarious and fascinating as she was one of the first female executives at Universal.  Additionally, hearing Haber discuss a meeting between Peckinpah, Cimino, and Deeley is as infamous as it sounds.  An onscreen title card prompts the questions Haber and Klausner discusses.

Interview with Film Critic David Thomson – is an archival 24-minute interview with the critic.  The critic discusses his first viewing of the film, how divergent opinions of the film have come up more recently, the cast, and everything you’d want from a critical perspective.

Deleted and Extended Scenes amounts 40-minutes of deleted and extended/alternate scenes.  All of these were from the Vietnam section of the film.  The scenes are fascinating but would definitely take away from the power of the film.

Rounding out the special features is a Theatrical Trailer (2:47), 2-minutes of 30-second Radio Spots (an image of a deer display), 22 images that consist of Behind-the-Scenes photos, posters, and stills in the Still Gallery.

The Deer Hunter is a cinematic masterpiece.  Shout Factory via their Shout Select label has given the film it’s just due.  An amazing transfer, great informative extras, and both a UHD disc and a Blu-Ray Disc option. HIGHEST POSSIBLE RECOMMENDATIONS!