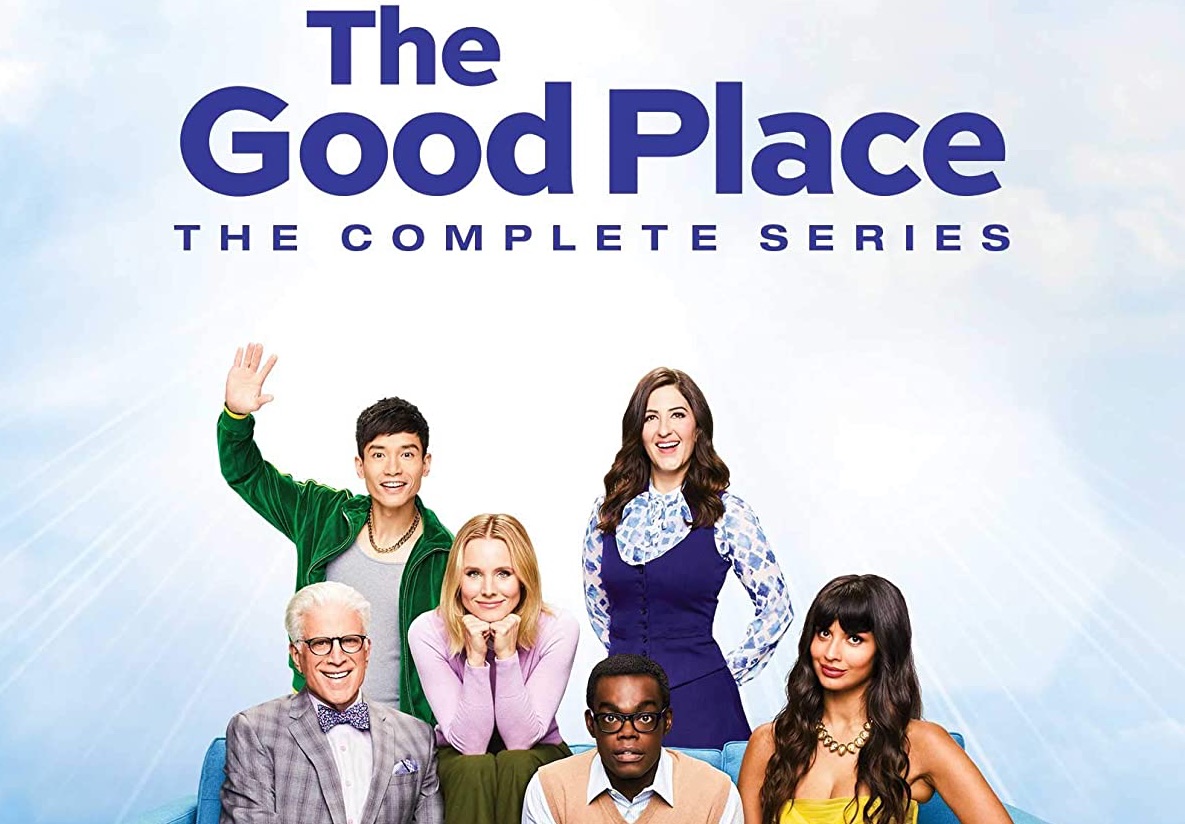 What’s the best way to wrap up a TV show? With a great Blu-Ray Box Set edition of said Series. Shout Factory has done just that for The Good Place.

Many shows only push themselves once or twice a season.  One can set these pushes or twists like clockwork during the mid-season break and the Season finale.  The Michael Schur created show, The Good Place manages to push itself continually forward into new areas and storytelling arenas through the entire series till the very last episode.  Schur and the writing staff have managed over the 50-episodes of this series to push beyond conventional TV narratives.

The Good Place finds its home in comfortably and confidently pushing the story forward beyond conventional episodic Comedic TV series becoming one of the best TV shows ever produced. Statius is the bread and butter of any comedy series.  The hardest work to do for any show but especially a comedic one is pushing into new territory of any kind.  Watch any standard popular comedy series and you will notice a pattern of the characters never changing or evolving.  You will see the same storylines pushed again and again.  The Good Place takes those dictums and shatters them with a sledgehammer.  Schur and Company have dared to be better at storytelling than few TV Series think of or even dare to dream.

This is not because of the continual shifting of and pushing the storytelling into new avenues.  Anyone could do that.  It’s how The Good Place does this and with style, humanity, emotion, and wit, that makes it special.  Landing a high concept comedy is hard enough but to imbue it with those attributes and have it evolved in a way that feels more like the best of cinema rather than the worst of Television is a feat that’s nothing short of miraculous.  The Good Place is the type of TV show that not just demands to be watched but repeated viewings.

Shout Factory has given all 50-episodes the best transfers possible.  The Episodes have been given healthy space on each of the 8-discs (a 9th disc holds most of the special features).  The result is a beautiful and healthy image that’s razor sharp and robustfully colorful.  Fans of the show will delight that their show has been treated with so much respect.

The Commentary on Everything is Fine/Flying AND Mindy St. Claire/Michael Gambit features Creator Michael Schur, Executive Producer Drew Goddard, And Co-Stars Jameela Jamil And D’Arcy Carden.   The 90 minutes of commentary spread across the opening and ending of the season is a lively affair. Creator Schur and E.P. and Pilot Director Goddard have a great back and forth (including Goddard discussing having never seen any of Schur’s work). Both Jamil (who plays Tahani) and Carden (who plays Janet) are on the commentary and bring as much information as both Schur and Goddard do. Though lively and funny the four manage to give out some great information about the show’s production and writing. My favorite being Schur went to Damon Lindeloff for advice on the script.

The commentary on Dance Dance Resolution is the season two episode featuring Creator Michael Schur, Executive Producer Drew Goddard, Producer Megan Amram, And Actor Ted Danson.  They discuss everything that went into making the second season. It is spoiler filled please be warned to NOT watch this before watching the entire season because they do in fact give away a lot of the plot points in the season

Season 1 Gag Reel – is a 10-minute gag reel that is completely uncensored.  This is definitely worth watching just for flubbing and the series of curses spouted out by the actors.  Adam Scott, who hosts/intros, saying “fucking Pokémon, or whatever you do” is worth it.

Season 1 VFX Reel – is a little over a minute and is a split/slide screen reveals of the difference between VFX and the plates they shot them.

112 Mindy St Claire Table Read (28-minutes) – the production’s table read of the final episode of the first season is a single camera take of the read.  It’s shot to show the cast as they read the script.

Season 2 VFX Reel – is less than a minute and similar to Season 1’s VFX reel split/slide screen reveal of the VFX and plates they used to shoot them.

Season 3 Gag Reel – is a 9-minute gag reel that may be the best of the gag reels, hosted by Sean (Mark Evan Jackson).  Note, the gag reel is very uncensored.

Season 3 VFX Reel – like its predecessors in the first two seasons is a 2.5-minute VFX reel split/slide screen reveal of the VFX and plates they used to shoot them.  Of note, they do show how they did the Multiple-Janet FX work.

2019 San Diego Comic-Con Panel (50-minutes) – Hosted by Mark Evan Jackson (who plays The Bad Place’s Sean) is so much better than the finale special.  Featuring Michael Schur, Drew Goddard, Ted Danson, Kristen Bell, Wiliam Jackson Harper, Jameela Jamil, Manny Jacinto, and D’Arcy Carden.  If one has ever seen or been to a Comic-Con Panel at the infamous Hall H, you will know the energy and fun times that are had in this long-form group discussion of the series.  This was filmed as the group was beginning to film Season 4.

Finale Special Hosted by Seth Meyers (12-minutes) – The finale special featuring the cast Ted Danson, Kristen Bell, Wiliam Jackson Harper, Jameela Jamil, Manny Jacinto, and D’Arcy Carden isn’t really special.  The reason is simple, they don’t really go deeper beyond the surface questions and discussions. One wished that the special was more like the Comic-Con featurette (see above) with more interplay and better questions. Meyers is acceptable as a host and one knows why he was chosen, but one wishes that Michael Schur or one of the writers like Megan Amram or Alan Yang host.  All the same, it’s nice to see the cast together one last time.

The Good Place is, no joke, one of the best TV Series ever created. Shout Factory has done a great job of bringing this series to Blu-Ray with a host of great extras and most importantly near flawless transfers. HIGHEST POSSIBLE RECOMMENDATIONS.