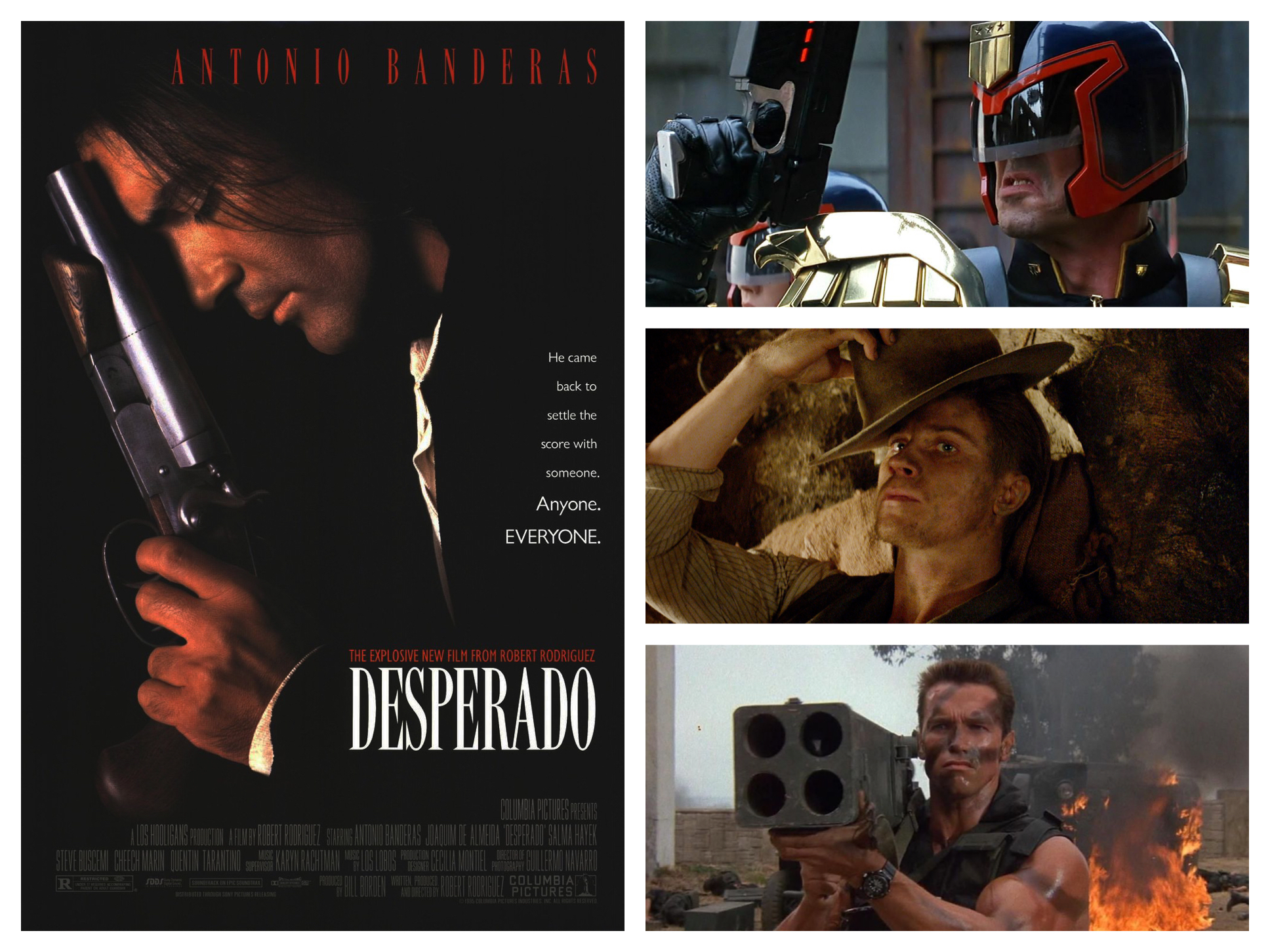 It’s been a while since we’ve posted a Preoccupation. We’ve got some newer reviews up on the site. But we’re back to taking a look at what our EIC Adam has been watching lately. Also, a bit of a format change…

There’s actually some really interesting stuff that’s been released recently. Spaceship Earth is a great doc from Neon that we reviewed. Marie has been watching some great virtual theater content you can find here. Of course, I did the SXSW coverage, which you can look at right here!

There wasn’t a need for Preoccupation. We’ve had a lot of interesting stuff. I should note that the SXSW experience of doing it virtually was amazing. Watching those five films I reviewed was a true delight. I’m hoping to do some more virtual film festivals in the coming months. This isn’t the preferred model but at this point… we really can’t fuck around with this social distancing for a good long while.

Enough about that. On to the good stuff:

In walks the BIGGEST Mexican I have ever seen…

It’s a sport now to trash talk Robert Rodriguez and his filmography.  I for one do not.  Will not.  The guy’s films are too much a part of my formative years.  Seeing a Mexican American filmmaker make genre films with Mexican Americans for Mexican Americans… being part Mexican myself.  It was a bold thing.  Desperado is a remix of his original low-fi wunderkind El Mariachi.  Think sequel/remake in the way that The Evil Dead and Evil Dead 2: Dead by Dawn is.  Rodriguez plays with iconography and the building of an action scene, unlike anyone who’s only made one film before this.  Yes, he loves John Woo but damn if you’re going to figure things out in the mid-1990s there was no better action director to follow suit.  The film gives Antonio Banderas the Super Star phase of his career showing everyone that wasn’t watching his Spanish Language films for the decade before this film he was all Charm and Star Power.  Watch it again.  You’ll be charmed and amazed by what Rodriguez can do with just $7 million.  Plus, there’s this little known actress named Selma Hayek in her film debut.  The actor’s opening moment rivals Rita Hayworth’s opening moment in Gilda.  Yeah, it does.  Deal with it.  Bonus point for a kick-ass Soundtrack (hey Spotify, get this on your app!).

This one is all about conflicted feelings.  I love the visuals, the VFX, the practical FX work.  The moment Stallone takes off the helmet it becomes a Stallone movie and not a Judge Dredd movie.  If you can let that fact go… it’s a fun violent sometimes cheeky 100-minute ride.  My favorite part was the realization that Ewan Bremner shows up in a 2-minute supporting role, something I’d never noticed before.  There’s something about seeing Max Von Sydow show up in genre films of any level that makes me smile.  Here he’s used effectively as Stallone’s mentor and the Head Judge.  To be honest, its trash, and I waaaaaaay prefer DREDD the 2013 film much much more, but this one is fun.  Of note, there is supposedly a “better” director’s cut of the film that Danny Cannon made before it was taken away from him by, you guessed it, Stallone.  Bonus points for a killer Jerry Goldsmith score.

Commando (Available on HBO Now/Go soon to MAXIMUS or whatever)

Mark A Lester was in on the joke (watching Class of 1984, you have to think he did).  Steven A de Susza had to be in on the joke too (the rewrite to 48HRS he did too).  Joel Silver and the mountains of cocaine… not so much (as they say, cocaine is a hell of a drug).  Betwixt these three crazy bastards, they created a Frankenstein monster child that works despite its UN-PC, Racially insensitive, stupid, stupid, STUPID SELF.  It helps that you have guys like David Patrick Kelly, Bill Duke, and Vernon Wells who absolutely 1000% know the film they’re in.  It also helps that guys like Dan Hedya do NOT know because his accent and brown face may be one of the most insulting uses of racial stereotyping since Al Pacino in Scarface.  It’s that bad.  Commando is the sensitive story of an Ex-Special Forces dude (Ah-nuld) who spends his free time walking giant ass logs around and making homophobic jokes about Boy-George to his tween daughter (Alyssa Milano).  Who when his daughter is kidnapped and he’s put on a plane for whatever reasons all hell breaks loose.  It all ends in a Cuban-style Country-isle where the private military of Hedya’s General/Presidente shoot worse than Stormtroopers from Return of the Jedi are mowed down by the thousands until Vernon Wells and Ah-nuld face off in a sweaty backlot set from a White Snake video.  It.  Is.  Glorious.  Actual body count: 2,302.  Bonus points for the killer James Horner score that’s just as much its own thing as it is him copying his 48HRS score.

When an Actor is better than the sum of the film’s parts… and no one notices. Also, a word on how we’ve begun to view/critique films.

You know we’ve gotten to this point in our media consumption where everything either has to be a home run or nothing.

It’s never the way that I’ve consumed films/TV/Videogames/Books/Comic Books or any art in general.  There’s a sliding scale of more than just a Like or Dislike.  Point, in fact, it’s a lot more complicated than a numbering system. It’s part of the reason why we don’t’ have a rating on the site.  I feel like you are intelligent enough to realize when we like or not like a movie.  More specifically what we like and don’t like about a movie.  If we are all honest with ourselves how many films do you outright hate or have hated?  I can think of about 20 to 30 in my life that I have rejected wholly and are just trash.  Mind you that’s of about 15,000 films I’ve seen in my lifetime.

You can lump me into “he loves everything”.  Fine.  That’s cool.  But it’s not the case.

There is much more to films that an all or nothing point of view.  Having one is creating a vacuum for yourself.  A vacuum in which you’re not looking at anything beyond a point total.  Film is art.  Even at its most crass and opportunist, it is still an art form.  It takes some sort of artistry and articulation to finish a film or produce one.  It may be something that you don’t like or thing is blunt bordering on stupidity but as The Dude says, “well… like… that’s your opinion, man.”

Joe Wright has always been known as a Brit’s British director.  Look at his last film; Darkest Hour.  The Winston Churchill biopic is so British about its subject that you can cut the mince pie with Colonel’s Blimp’s Sabre (that’s REALLY-REAL British for yous not in the knows).  I like the film, a lot.  Gary Oldman is wonderfully inspired in a Lon Chaney style performance that he deserved an Oscar for.  Unfortunately, it’s devoid of the passion and adroit storytelling that say Hanna or his beautifully underseen Anna Karenina. It’s professional and smart, yes, in the utmost.  Is it passionately told, eh.

Which brings us to 2015’s Pan.  The film that’s filled with visuals delights but lacks the fundamental story acumen to know what story it should be telling.  Its production design, lighting, camera work, visual splendor, but lacks the clear-eyed point of view to understand that we did not need another Peter Pan film.  There have been so many adaptations of this particular story, most of them not great.  Doing an Origin/Reimagination of this oft-told tale isn’t necessary.  Someone as smart as Wright should have known this.

Buried within the obnoxiousness of another Pan’s story is a B-Plot and Supporting Performance that recalls a rocklingly good time film that one would want.  The sort of adventure film that used to be produced in the 1980s.  Indiana Jones adjacent.  You know the ones.  Yes, those films where the charming roguish lead would be suckered into an adventure looking for fortune and glory, usually by a beautiful damsel not so quite in distress.  Often the poster or VHS cover was more alluring than the actual film itself.

The moment that Peter (Levi Miller) meets James (Garrett Hedlund) and they form a tenuous partnership the film is elevated.  Of course, James is James Hook without his Captain moniker.  Hedlund with a strange accent and affectation in his speech (which astoundingly he keeps through the entire runtime) is the weirdo rouge that gives this film its charms.  The character and his plot are the reason to watch this film.

Whenever it is focusing on Hedlund’s Hook you can’t help but love the film.  It’s weird and funny and odd enough to feel almost like the Coen Brothers had decided to write an adventure film.  Hook is a fully-dimensional character, not the plot-cipher that Peter is.  He’s at points heroic, cowardly, funny, abrasive, maddening, evil, conceited, understanding, and charming.  Most of all Hedlund is compelling in a way that he’s often never permitted to be.

The almost-romance between Hook and Tigerlily plays so well it feels like no one told Rooney Mara and Hedlund they weren’t Marrion and Indy in a Raiders of the Lost Ark remake.  Mara plays Tigerlily like she were Katherine Hepburn by way of a Warrior Princess. Mara makes her rebuffs of Hook’s flirtations like sexy counter-point flirtations.  Volleys that are metaphorical or literal smacks to the face that Hedlund’s Hook can’t help but smile as he jaws in pain (both literal and metaphorical.

Their chemistry and the entire enterprise is all for naught as the primary film is a lead balloon tied to the Joseph Campbell “call to adventure” Hero’s journey of Peter. The film spends more times lumbering the importance of Peter, and his becoming “the Pan” to defeat the dreaded Black Beard (Hugh Jackman, stuck in a film he thought was going to be a musical… hold on dear Hughie, only three more years until you get that movie).  The film almost stalls, well it does for a few minutes, as they recount Peter’s mother’s demise at the hand of Black Beard… you can hear the story development meeting and how this was shaped.

Though, if you watch the film, you will not care about these all-too-familiar plot points.  It will be Garrett Hedlund.  As James Hook, he is in an entirely different movie.  One that you want to see.  One that’s a bit more dangerous, unique, fun, and altogether better than what the main story is selling you.  It’s just too bad they didn’t figure out we didn’t need another Peter Pan story.  The parts that do work… work like a well-oiled machine.  Pan is the type of film that you do a bit of remote control editing on.  One that isn’t bad, but definitely isn’t great.  One that has a spark and a piece of wonderful mania that shouldn’t be ignored.

We will be back in a day or so to talk Birthday Celebrations, one of the greatest films ever made, and maybe the first VIDEO GAME REVIEW!