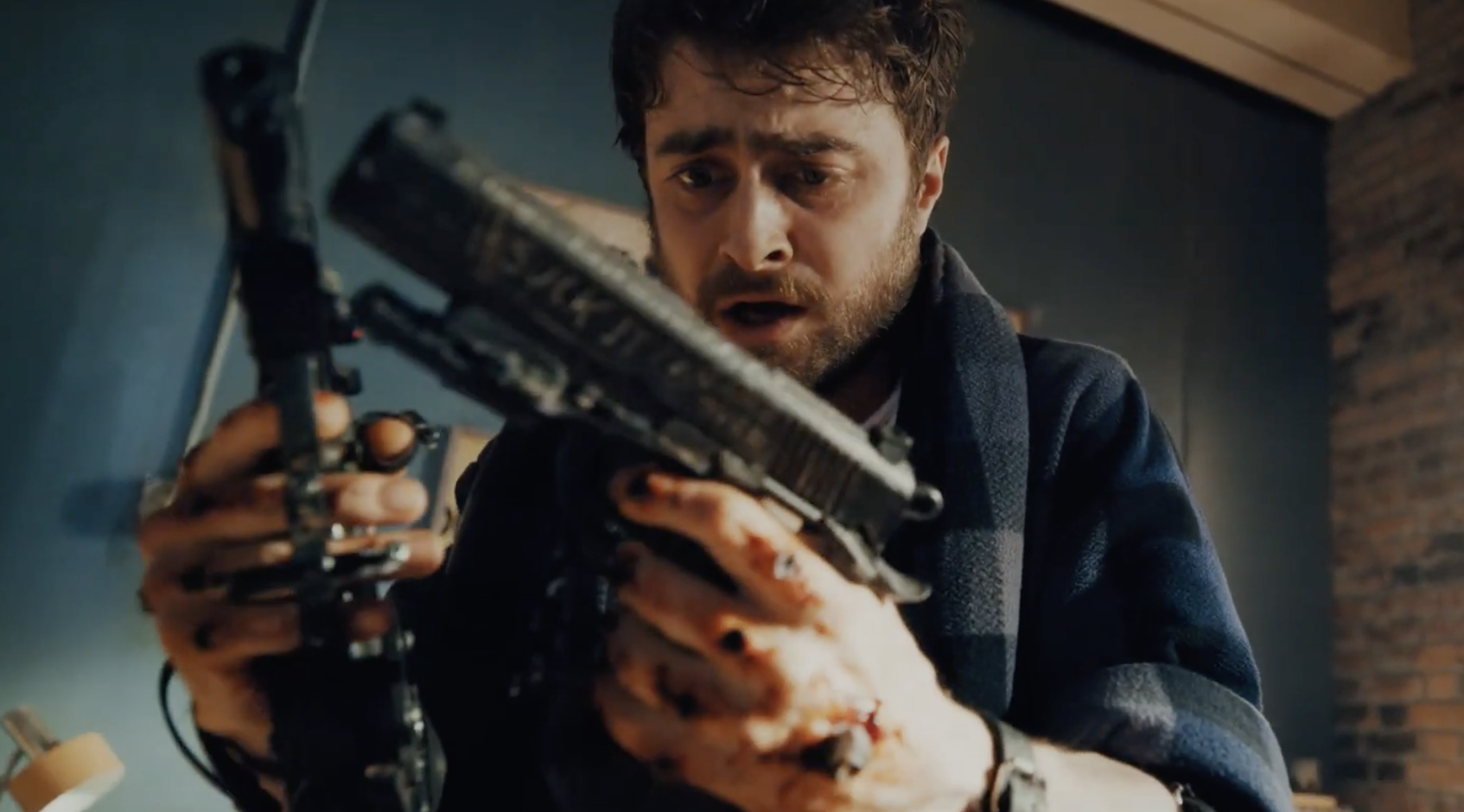 Daniel Radcliffe stars as an unassuming internet troll thrust into a real-life game of ultra-violence as Psychopath Reigning Champion Samara Weaving hunts him down.  Oh, yeah and he has Gun Hands.

Miles (Radcliffe) is your average twenty-somethings guy.  Dead end job as a programmer by day.  Internet troll by night.  One particular night he stumbles upon Skizm, a new game that takes “online gaming” to the next level.  Skizm is Purge by way of Fortnite.  Opponents face off in real life and attempt to kill one another.  Miles being the troll he decides to light up the message boards.  Big Mistake.  Before you can say Meme, the Game’s designer Riktor (Ned Dennehy) has thrown Miles into Skizm and for good measure surgically attached guns to both his right and left hands.  To make matters worse, Nix (Weaving) the game’s top player is after him. Can he survive long enough to save his girlfriend and figure out a way to get the guns removed from his hands?

Guns Akimbo is the type of lunatic cult action film that many searches for but never find.  An action film on the surface that’s wall-to-wall John Woo inspired gunplay and comedy but under the surface a biting social satire.  Think, Robocop for the internet troll generation.

The film works on both levels and can be seen as such if one is inclined.  The film is at face value a visually stunning hyper-active action film.  Under that face is a scathing critique of how we consume violence and suffering glibly through our phones, computers, and tablets.  Editors Luke Haigh, and Zaz Montana create a film that slyly intercuts various “audiences” as they react to Miles’s suffering and achievements as though he wasn’t a real person.

Radcliffe continues his wonderful journey into genre fare post-Harry Potter with taste and enthusiasm.  Much like Swiss Army Man, or Horns Radcliffe is a physically and emotionally put-on hero.  As Miles, there’s a true everyman quality to him that recalls what Bruce Willis was so good at in the late 1980s and early 1990s.  That innate ability to be instantly relatable and funny as he is handed his proverbial ass to him at every corner.

On the other side of this film is Samara Weaving.  Weaving continues her ascent as a Super Star with a role that in any other’s hand would have felt one-note.  As Nix, Weaving gives the psychotic Assassin the dryest sense of humor and a sly bit of emotion that makes the character less one-note than at first would appear.  One hopes she continues to make these types of interesting pieces of truly great genre storytelling.

Guns Akimbo may, and probably will insult and assault you.  That’s the point, though.  If one can look beyond the sensory overload, one will find a film that has more to say about internet culture than many films about the subject.  It’s early in 2020, but one has a feeling that Guns Akimbo is going to be around a lot longer than the calendar year.

Guns Akimbo is in select theatres and VOD on February 28th